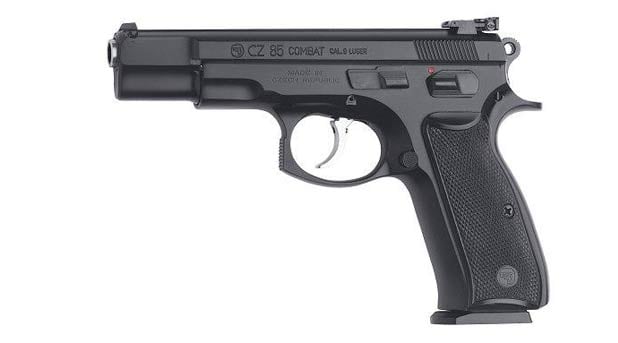 The CZ 85 Combat is a large frame semi-automatic pistol chambered in 9mm. The 85 Combat is produced by CZ-USA, a Kansas City based subsidiary of the Czech arms manufacturer Česká Zbrojovka Uherský Brod. The 85 Combat is similar to the 85 B, but offers several additional features.

The 85 Combat also includes over travel adjustment on the trigger, meaning the trigger can be set to reduce the amount of reset travel distance required between firings (or trigger depressions).

CZ used Browning’s Hi-Power pistol design as a jumping off point for the CZ 75’s design, which is the 85 B Combat’s papa bear. Similar to the Hi-Power, the CZ 75 has a locked-breech system, where backwards force is absorbed by the slide rather than the frame. It is also designed to deliver short-recoil, so the barrel and slide are locked together until the slide rides back.

The 85 Combat features an all-steel construction and plastic grips. It has a cold hammer forged barrel, meaning a mandrel carefully passed through the bore to carve the rifled grooves; this process increases durability and precision.

CZ recommends the 85 B Combat for competitive shooting.