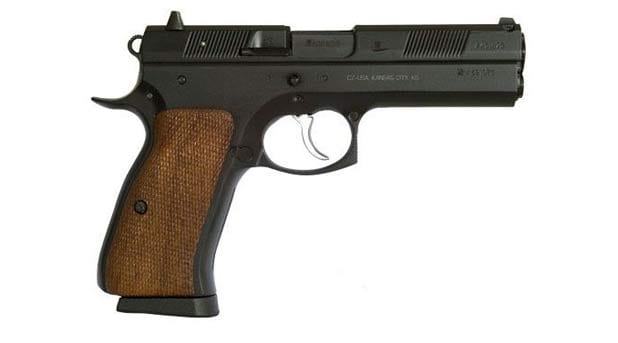 The CZ 97 B is a semi-automatic large-frame pistol chambered in .45 ACP. It is produced by CZ-USA, a Kansas City based subsidiary of the Czech arms manufacturer Česká zbrojovka Uherský Brod.

The 97 B is a slightly larger version of the CZ 75 B. Both guns have been developed from the CZ 75 design.

The CZ 75 is a pervasive handgun used by more governments, militaries, police, and security forces worldwide than any other pistol. Originally developed in 1975, the CZ 75 has given way to a number of variants. Because the manufacturer did not originally secure global patent protection for the CZ 75 design, a plethora of copies and variants have been offered by other global arms companies.

The CZ 97 B features steel construction with either a glossy blue finish or a polycoat black finish, and wood grips. The CZ 97 B includes a barrel length of 4.8″, and an overall length of 8.3″, and utilizes a cold hammer forged barrel. During hammer forging, a mandrel is carefully passed through the bore to carve the rifled grooves; this process is known to increase durability and accuracy.

The 97 B also includes a screw-in barrel bushing, serving as a guide for the barrel. The 97 B includes fixed sights and a manual safety. The 97B includes a 10-round magazine.

The 97 is also available with a decocker so shooters can manually set the trigger for double-action. That model is called the CZ 97 BD.