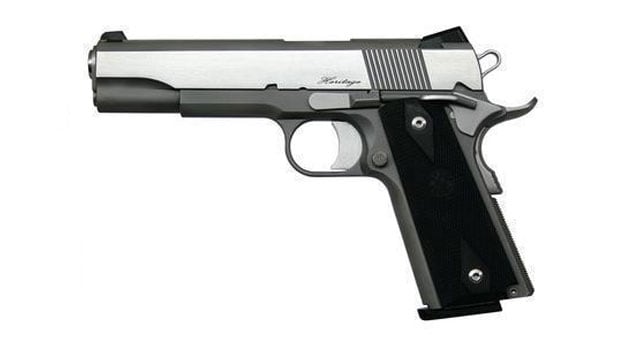 The CZ Dan Wesson RZ-45 Heritage is a large frame semi-automatic pistol chambered in .45 ACP. It is produced by CZ-USA, a Kansas City based subsidiary of the Czech arms manufacturer Česká zbrojovka Uherský Brod.

The Dan Wesson RZ-45 Heritage features a forged steel frame, for increased durability and precision, and cocobolo grips. It is a single-action 1911 model.

Like all CZ handguns, it derives its basic design from the CZ 75. The CZ 75 is a pervasive handgun used by more governments, militaries, police, and security forces worldwide than any other pistol.

Originally developed in 1975, the CZ 75 has given way to a number of variants. Because the manufacturer did not originally secure global patent protection for its CZ 75 design, a plethora of copies and variants have been offered by other global arms companies.

The Heritage also utilizes a match-grade barrel and fixed Tritium front night sights. Tritium is a radioactive hydrogen isotope, and is commonly used in making glow-in-the-dark night sights. The RZ component of the gun’s name stands for Razorback, referencing a machined, serrated target rib located on the top of the slide.

Browse our online store for new and used Semi-Automatic Handguns for sale.