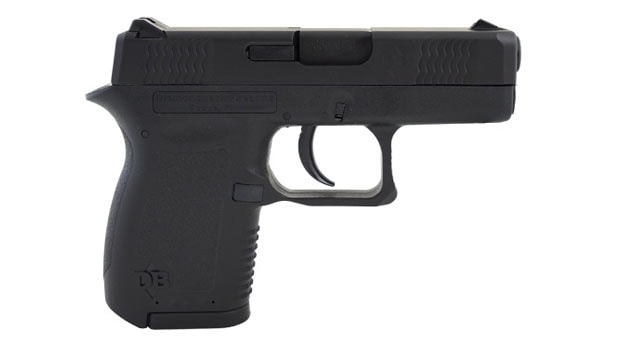 The Diamondback DB380 is a semi-automatic pocket pistol chambered for .380 ACP.

Most reviewers rave about the DB380’s large 3-dot sights because, unlike on other pockets, they are easy to see therefore easier to aim – and the rear sight is adjustable for windage.

However, there are other sight options…

The DB380MS has machined sights, which are flatter, and depending on the shooter’s preference, would be more comfortable to carry. The DB380CTC comes with the same large 3-dot sights but also a Crimson Trace laser (model LG-491).

To activate the laser, all the shooter has to do is wrap a hand around the grip and a finger will naturally press the button that activates it, so the lasers works naturally.

The DB380 uses Diamondback’s patented Zero-Energy striker firing system where the trigger is the driving force behind the firing pin as opposed to spring tension. It also has a double-action only trigger, so a long pull sets off the action.

The DAO and Zero-Energy striker double as the DB380’s safety because it doesn’t have a manual one. Typically concealed carry weapons have a DAO trigger because in a situation where the user needs a pocket pistol, he or she wants to react immediately whereas a safety switch would interrupt that reaction.

The DB380 is 0.75″ wide, so it’ll be comfortable for shooters to carry in a pocket or waist holster. It is available in a variety of colors and finishes. And, an extended magazine grip is available.

Its caliber .380 ACP continues to grow in popularity. It is slightly smaller than the 9mm and performs comparably to it. The major difference, besides size, is the .380 caliber is said to have less stopping power.

Diamondback opened its doors in 2009 and has already established a name for itself in the pocket pistol market. Diamondback recommends the DB380 for concealed carry or home defense.

Browse our online store for new and used DB380 pistols for sale.