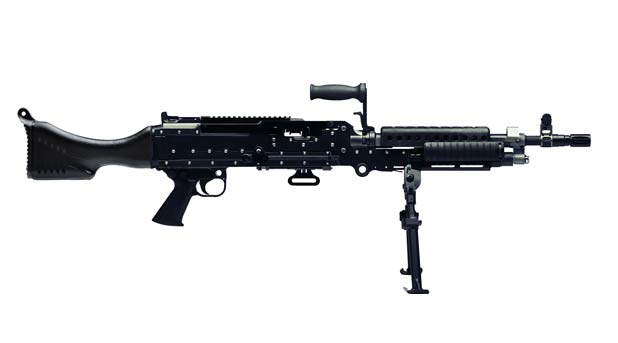 The M240 machine gun, produced by FN d’Herstal, is a general purpose machine gun chambered in 7.62 NATO. Fabrique Nationale d’Herstal is a Belgian firearms manufacturer, with production facilities located in the United States.

The M240 was designed in the 1970s accordance with the US military’s competition seeking a new mountable 7.62mm general machine gun. Its production began in 1977, and the M240 has subsequently, in large part, replaced the M60 and other older machine guns. It’s been used in every major US military conflict since the 1980s and is still used today.

The M240 is a versatile weapon because it can be carried or mounted to a vehicle.

The M240 has a belt-fed, gas-operated cycling system, meaning pressurized gas released from the firing of a round is captured in a tube inside the gun, and then used to power the rearward action of the bolt, thereby ejecting the spent casing and loading a new round. The M240 employs an open bolt design, meaning the bolt and its associated components are held rearward when the weapon is ready to fire.

All M240 variants employ disintegrating belt feed systems, but some variants can also use non-disintegrating belt systems. The M240 includes three distinct rate-of-fire settings, allowing the user to select 750, 850, and 950 round per minute rates. To change from one setting to the next, users must dismount the barrel, remove the gas regulator collar, and tune the gas regulator to the appropriate level. Doing so will allow the necessary amount of gas to cycle through the reloading system. A barrel release button also allows barrels to be swapped expeditiously.

The M240 follows FN MAG-58 specification, meaning the M24 shares parts interchangeability with standard MAG-58 machine guns. A plethora of variants have been produced, and are in use among armed forces units worldwide.