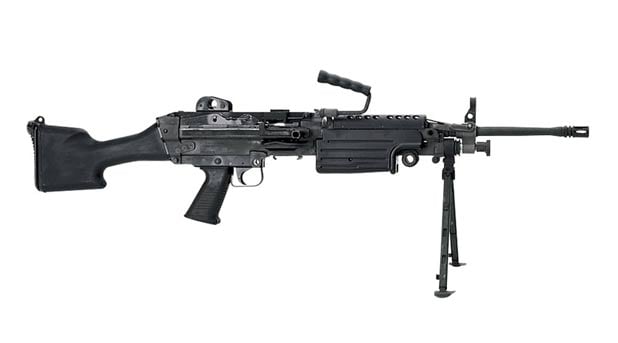 The Fabrique Nationale de Herstal M249 Squad Automatic Weapon is an automatic fire assault rifle chambered in 5.56 NATO. The M249 was originally designed to enable light infantry units to employ effective automatic fire power. It was essentially designed to supplement or replace the M2 Browning heavy machine gun and the M60. In addition, these larger machine guns are heavier and more difficult to transport than the lighter M249 SAW.

In 1980, the US military selected FN’s model XM249, which was modeled after the FN Minimi, for development and the US officially adopted the M249 SAW derivative in 1982. It fulfilled the requirements and desired features the US military wanted.

Features that include a chrome lined bore for increased durability and a hydraulic recoil buffer to minimize shoulder impact on the shooter when firing at high rates. The M249 also features a hammer forged barrel, meaning a machine precisely carved the grooves in the bore for increased accuracy and durability.

The M249 SAW has an open-bolt design, which means the firing mechanism holds the bolt back before firing. When the trigger is pulled, a spring pushes the open bolt forward, loading a shell into the firing chamber while closing, and finally firing a round. The captured pressurized gas from the spent round is then employed to eject the casing and repeat the entire process.

A number of magazines may be used with the M249 SAW. However, the use of belt ammunition is predominant and often preferable as a result of the gun’s high rate of fire. The M249 is capable of firing 750 to 1000 rounds per minute, and has an effective range of 800 meters. The M249 SAW is generally fired from a tripod position, but is easily fired from a standing or moving stance as needed.

The SAW has been used in every major US combat operation since the invasion of Panama in 1989. There are currently 10,000 M249 SAWs in operation within the US Military and the military has plans to refurbish about 8,000 for future use. However, the US military has recently taken steps to develop a replacement for future use and companies like LWRC have produced models like the M6A4 for possible replacements, but the US military hasn’t committed to anything yet.