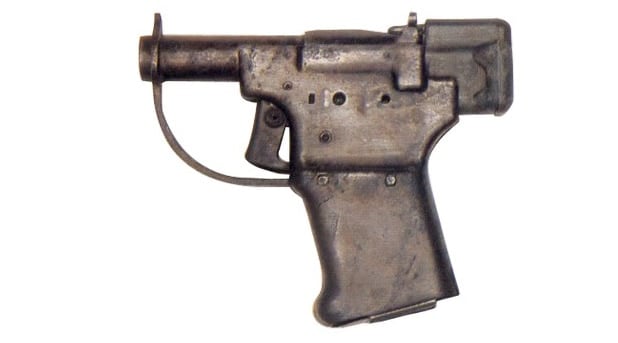 The GMC FP-45 Liberator is a single-shot small frame pistol chambered for .45 ACP. It was created in 1942 by the US Army Joint Psychological Committee and produced by General Motors.

It was cheaply constructed and only holds one round, however, the US Army never actually intended to give this pistol to front line troops, but rather friendly fighters in enemy territory.

The idea was to do a mass dropping of these pistols so the fighters could find one then sneak up on an enemy soldier, ambush him and then take his weapons. Needless to say, it didn’t work that well. Some historians say it was successful in intimidating enemy troops.

The Liberator was incredibly inexpensive to make. It has a stamped steel construction and, because it’s a single-shot, it lacks a lot of moving parts. It only holds one round and lacks features such as a rifled barrel and a safety. The idea behind it was to have the user sneak up behind an enemy soldier and shoot them at point blank range.

The FP-45 Liberator is considered a collector’s item. It’s supposed to be worth a considerable amount if it is encased in its original packaging – meaning a box with 10 rounds and a comic-strip instruction manual.

Browse our online store for new and used single-shot handguns for sale.