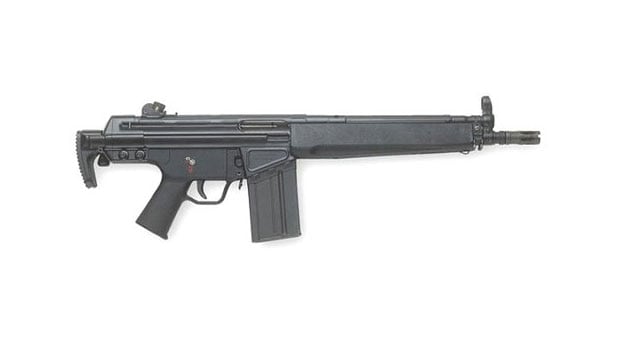 The Heckler and Koch G3 is a select-fire assault rifle chambered in 7.62 NATO. The G3 was designed in a joint venture between HK and Center for Technical Studies of Special Materials (CETME), a Spanish state-owned agency. Mauser engineers were also instrumental in the early development of the rifle.

The G3 has been hailed by many as one of the post-war European weapon success stories. Both the G3 and its variants are still in operation in military and law enforcement units all over the world today.

This rifle was originally manufactured with the use of sheet steel stamped parts, which reduced costs and speeded production time. It employs a roller-delayed blowback system in which the recoil energy from a fired cartridge forces the bolt and firing pin rearward.

The operating cycle is continued as the bolt slides along two locking rollers, ejecting the spent casing and chambering a new round.  The G3 offers a 3-position fire selector in semi-auto firing mode, full-auto mode and safe mode. It uses the unique rotary diopter rear sight that is also adjustable for elevation and windage.

The G3 has given way to a number of variants offering different chamberings, magazines, accessories and sizes. It has been adopted by more than fifty nations’ armed forces since its inception.

Browse our online store for new and used Heckler & Koch rifles for sale.