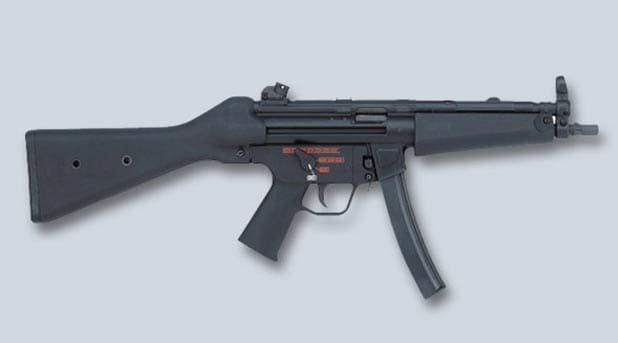 The Heckler and Koch Machine-Pistol 5 is a select-fire submachine gun chambered in 9mm. HK is a German arms manufacturer founded in 1949 and is headquartered in Oberndorf am Neckar, Germany. The ubiquitous MP5 was first developed in the mid-1960s, and has since enjoyed pervasive use among armed forces, security, and law enforcement units worldwide.

The MP5 uses the same recoil-operated blowback system found in the HK G3. This roller-delayed blowback system uses recoil energy from a fired cartridge to force the bolt and firing pin rearward. The operating cycle is continued as the bolt slides along two locking rollers, ejecting the spent casing and chambering a new round.

The MP5 has a free-floating, cold hammer forged 8.85″ barrel. Free floating barrels avoid contact with the stock, meaning that stock components do not absorb the recoil force of fired rounds. Cold hammer forging is a process by which a mandrel is carefully passed through the bore in order to carve the rifled grooves. This process achieves heightened barrel precision and durability.

The MP5 also employs a closed bolt system, meaning that when the gun ceases firing, the bolt remains closed. The MP5 is available with interchangeable fixed, retracting, and folding buttstocks. Designed as a tactical rifle, the MP5 offers a number of attachment points for mounting optics and accessories. And the trigger group selections include single-fire only, fully automatic, 2-round, or 3-round burst options.

Since its inception, HK has continued to improve upon the MP5 design. There are currently over 120 variants available, and a wide range of accessories and aftermarket parts are widely available too. A number of aspects of the MP5 have continued to change over time, meaning older models often differ from newer ones. For example, the original MP5 included a double-column straight box magazine. However, curved 15- and 30-round magazines were introduced in 1977. In the 1990s, the MP5 gave way to a predecessor, the HK UMP.

Both models are still being produced as of 2011, with HK offering A2 and A3 variants. The only difference between the A2 and A3 appears to be stock design (fixed versus retractable) and overall weight.