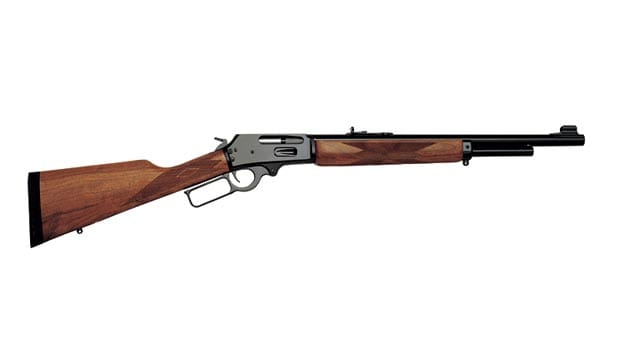 What separates it from other M1895s is its straight-grip stock, which is a more traditional style borrowed from a two-trigger shotgun design. Also, most 1895 models fire the short-range hunting round .45-70 Gov’t., but the 1895M fires the .450 Marlin, which is comparable in size. However, the rounds cannot be cross-chambered.

Otherwise the 1895M has similar features to the Classic M1895 like Marlin’s Ballard-type rifling in the barrel, which carves six deep and wide grooves in it that help improve accuracy for high-power rifles. It’s a slow process, however, almost no stress is put on the metal, so it can better absorb the violent reaction when a primer is charged. Also, it has a tubular magazine that’s non-detachable and runs along the barrel. Rounds are fed through the front of the tube and it chambers like a shotgun—a spring pushes the round down as the bolt slides the next one into place.