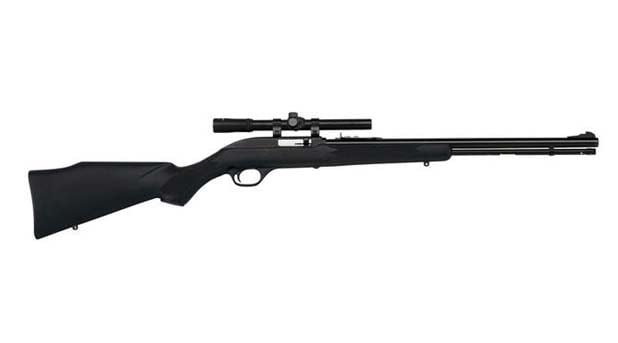 The Marlin Model 60SN is a semi-automatic hunting rifle chambered in .22 LR. Marlin has sold more than 11 million Model 60s since its introduction in 1960 and dubs it “the most popular .22 in the world.”

One explanation for that, it has always sold for a cheap price, even today it sells for less than $200, but it also shoots easy-to-find and reasonably priced ammo.

What makes the Model 60SN different from the standard Model 60 is that it has a a black fiberglass-filled synthetic stock instead of wood. Otherwise it is almost identical in size.

The Model 60SN features a 19″ barrel and has undergone Marlin’s Micro-groove rifling that carves 16 grooves into the bore. The Model 60SN has a patented “last shot” bolt hold-open system, meaning the bolt will be held in the rearward open position after the final spent casing is ejected.

The receiver features a steel charging handle and there’s a tubular magazine that holds 14 rounds. The Model 60SN is equipped with a folding rear sight and ramp front sight and Wide-Scan brand front hood.

The Model SN is also available with an optional factory-mounted, bore-sighted 4×20 scope.

Browse our online store for new and used Marlin 60s for sale.