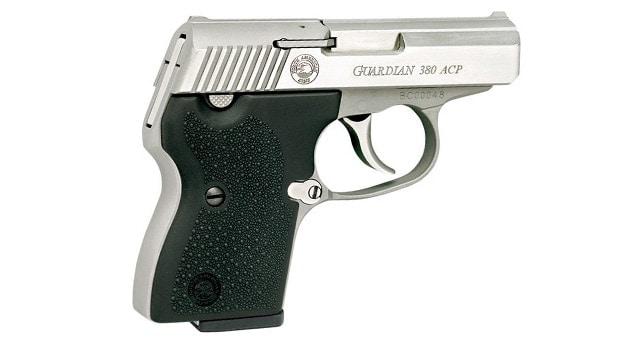 The North American Arms Guardian is a semi-automatic pocket pistol.  It is available chambered in either .32 ACP or .380 ACP.

The Guardian was originally designed for .32, but after a few years out in the market North American Arms (NAA) expanded the line into .380.

With its pocket size design, NAA says the pistol’s intended use is concealed carry and self defense. It is recommended to carry it in a purse or pocket.

Like a lot of pocket pistols, the Guardian lacks an external safety, but NAA has included a double-action only trigger with a heavy pull–something like 10 pounds. It is hammer fired, and uses a snag-free hammer. Other features include rubber grips, fixed sights, and slide serrations.

As an additional feature it includes an Integral Locking System.  This is an internal safety feature that will prevent an accidental discharge if the gun is dropped.

Crimson Trace Lasergrips is another popular add-on, as well as a grip extension.

Browse our online store for new and used NAA Guardian pistols for sale.