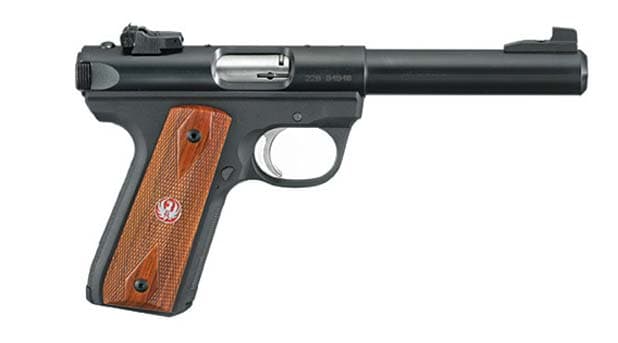 Bull barrels have little or no taper, and generally utilize a thicker, heavier construction. The heavy barrel is able to withstand many successive shots, and target shooters often favor the heavy barrel’s steadying weight.

The 22/45 is blowback operated, meaning the initial explosion of the cartridge powers the cycling. It uses an internal cylindrical bolt for its action, and how it’s different from a standard design is it recoils out of the pistol instead of pushing a slide back.

The 22/45 Bull Barrel features a loaded chamber indicator that offers both visual (red mark) and tactile (protruding notch) indicators. The 22/45 Bull Barrel has an adjustable rear sight and fixed blade front sight. Additional features include interchangeable polymer grip plates and a magazine disconnect that prohibits the gun from firing when the magazine is released.