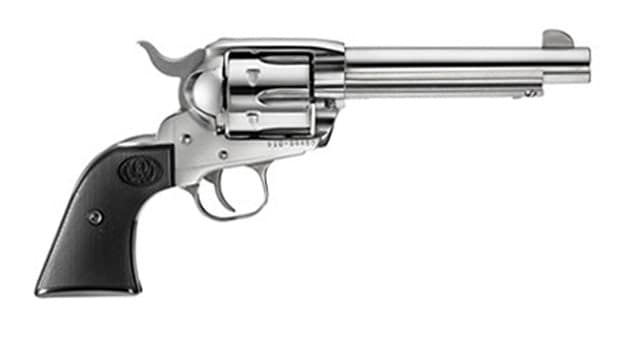 The Ruger Vaquero is a large-frame single-action revolver chambered in .357 Mag. and 45 Colt. The Vaquero is a scaled down version of the New Model Blackhawk revolver, which was designed with the Colt Peacemaker in mind. The Vaquero was introduced in 1993 because competitive cowboy shooting was on the rise (possibly due to release of the award winning Western “Unforgiven”).

Shooters preferred the Vaquero because it’s supposed to be closer in size and feel to the “gun that won the west” than the Blackhawk. The gun itself “vaquero” actually means cowboy in Spanish.

The Vaquero is equipped with features that are supposed to give it an authentic cowboy feel like a notch rear sight that looks like a groove and a fixed front sight, a pre-1962 steel grip frame, and a crescent shaped ejector rod.

Otherwise the Vaquero is available in either blued alloy steel or stainless steel, and with barrel lengths of 4.62″ and 5.5″. The Vaquero is equipped with an internal lock located beneath the right grip panel. Another up-to-date safety feature is the transfer bar, which allows users to carry the weapon fully loaded because the bar blocks the hammer from striking the firing pin if the weapon is dropped. However, users of the Vaquero have commonly complained of transfer bar failures and breaks.