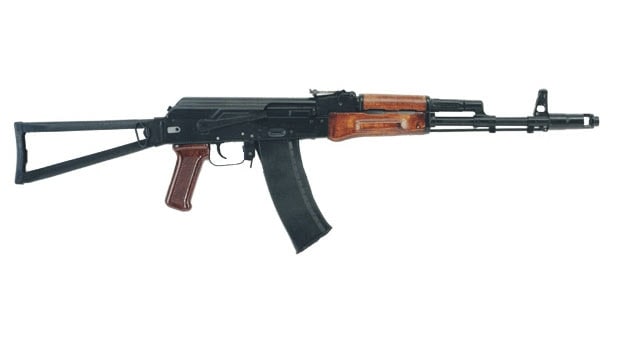 The AK design was created by Mikhail Kalashnikov in the latter half of WWII for the Soviet Union. In 1974, when it was released, the AK-74 was intended for the same purpose as the original: serve the USSR in military conflicts and expanding political power.

There weren’t that many changes made to adapt the 7.62x39mm-platform to a 5.45x39mm cartridge. To accommodate the new cartridge designers had to swap out the gas cylinder and the barrel to fit the size of the caliber.

However, there were additional changes made to the rifle so users wouldn’t confuse the AK-74 with the latter models and load it with the wrong ammunition. Aesthetic features such as lightening cuts in the stock and lower handguards. Its magazines look identical to the AKMs, but were also modified. Designers added a lug that prevented the 7.62x39mm cartridge from fitting.

Otherwise manufacturers used many of the same components constructing the rifle like stamped steel receiver, stock and internal components.

The AK-74 operates similarly to the other AK models in that it has a gas-piston operating system. The system controls the flow of propellent or expanding gases. The gas pushes the projectile through the bore and is then captured in a cylinder near the muzzle. That cylinder directs the gas onto a piston, which then pushes back and onto the bolt. When the bolt moves backward it discharges an empty casing and then pushes a fresh cartridge forward thus completing the cycle.

While in use the the AK-74 is said to operate better because of the smaller cartridge. The barrel is designed with a muzzle break that significantly reduces the recoil and muzzle climb when shooting in full-auto mode. It also has an effective range of 500 yards.

The AK-74’s most notable use was when it served the Red Army during the Soviet-Afghan War. Today there are a handful of variants that have served about 22 different countries  – mostly European countries that were once part of the Soviet Union, but also a handful of Asian and Middle Eastern countries like Afghanistan, North Korea, Mongolia and Vietnam.