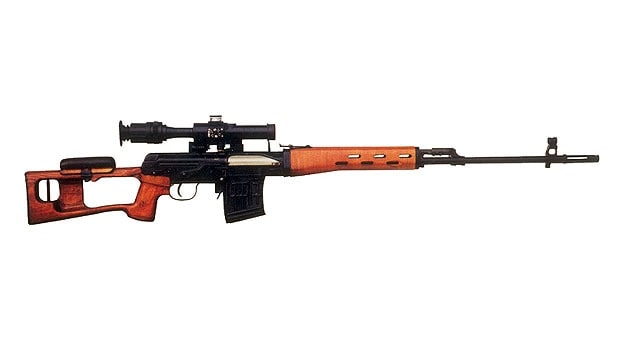 The Dragunov SVD prototype was conceived by Yevgeny Dragunov for a rifle design contest. After being selected for production, it was manufactured by Izhmash, a Russian weapons manufacturer. It was the standard issue rifle for the Red Army and a number of Warsaw Pact nations during the Cold-War Era.

The Dragunov SVD uses a gas-powered system. This means gas released from the firing of an individual round is cycled through a tube and used to manipulate the bolt in a desired direction.

The Dragunov has a 10-round detachable box magazine with an effective range of 1,200 meters, but with the use of optics the Dragunov’s effective range can be expanded to 1,300 meters. The standard issue scope for the Dragunov is the PSO-1, a Russian-made telescopic sight originally produced in the 1960’s. The Dragunov also features a chrome-lined barrel for increased durability and resistance to corrosion.

The 7.62x54mmR is a Russian rifle cartridge dating back to the late 19th century, and its performance is comparable the NATO cartridge. It is, however, only chambered for a handful of firearms.

The Dragunov has a reputation for superior accuracy and durability. The Dragunov SVD and its variants are still prevalent in military units worldwide. For example, it is reported that every Russian infantry squad carries with it one SVD marksman.

A plethora of Dragunov variants are currently produced all over the world, with the bulk of production occurring in Russia and China. Newer versions replace steel and wood furniture with polymer components.

Browse our online store for new and used sniper rifles for sale.