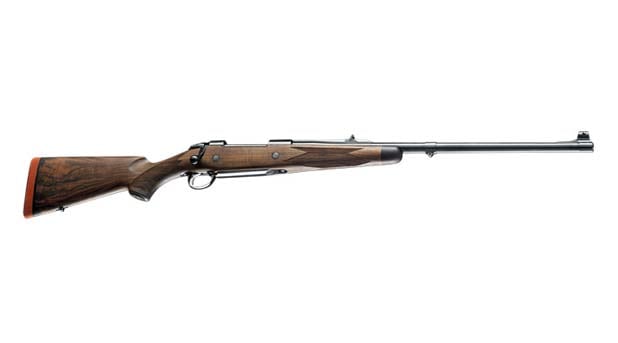 The Sako 85 Safari is a bolt-action hunting rifle chambered in .375 H&H Mag.

Sako is a Finnish gun manufacturer formed in 1927, and headquartered in Riihimaki, Finland. It was purchased by Beretta in 2000.

The Sako 85 is an upgraded model of its famous Sako 75 with the major difference being the 85 has a straight comb. The Sako 85, like the 75, was designed with big game hunting in mind.

The 85 uses a controlled feeding action, meaning the bolt face actually grabs the rim of the cartridge from the magazine. Controlled feeding prevents the round from falling out of the chamber while it’s being cycled. The bolt itself has three locking lugs, which requires a 70-degree lift, and is made from heat treated steel. Sako categorizes their actions by size such as small, medium, large, et cetera.

Features unique to the 85 Safari include a 24.375″ blued steel barrel and a handmade walnut stock with a custom made Pachmayr brand recoil pad attached to the butt. The stock also includes hand cut checkering on the fore-end and pistol grip. It uses a size large (L) and extra large (XL) action. The Safari has integral dovetail rails for scope mounting and adjustable sights. The rear sight is a shallow-V, and the front is an ivory bead. Sako says, optional premium scopes can be installed with Sako Optilock mounts.

All Sako 85 rifles share a number of features such as free-floating, cold-hammer forged barrels. Free-floating barrels do not come in direct contact with the stock, meaning stock components do not absorb post-shot recoil.

Hammer forging is a process whereby a mandrel is carefully passed through the bore in order to carve the rifled grooves. This process is known for achieving superior durability and precision. The 85 models include stainless steel, detachable two-row magazines that can be loaded through the ejection port. Its trigger is adjustable between two and four pounds.

The 85 model two-way safety locks both the trigger and the bolt handle. In addition, a bolt release button allows cartridge loading and removal while the safety is engaged.

Browse our online store for new and used Sako rifles.