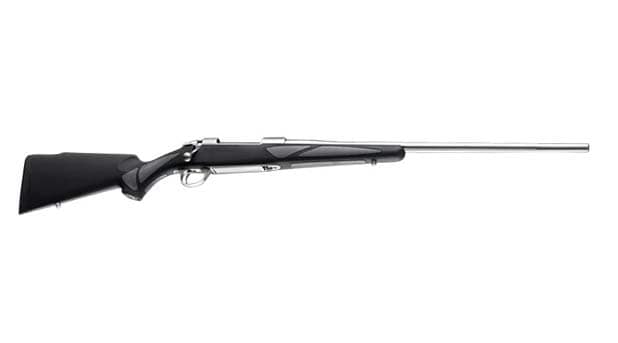 The Sako 85 FinnLight is a bolt-action hunting rifle chambered in 13 calibers. Sako is a Finnish gun manufacturer formed in 1927, and headquartered in Riihimaki, Finland. However, since 2000 the company has been owned and operated by Beretta.

The Sako 85 is an upgraded Sako 75 with the major difference being the 85 has a straight comb. The Sako 85, like the 75, was designed with big game hunting in mind.

The Sako 85 uses a controlled feeding action, meaning the bolt face actually grabs the rim of the cartridge from the magazine. Controlled feeding prevents the round from falling out of the chamber during cycling. The bolt itself has three locking lugs and they, in turn, provide the user with a 70-degree lift. The action is made from heat treated steel, a process that leaves the steel hard and durable. Sako categorizes their actions by size such as extra small (XS), small (S), medium (M), large (L), et cetera, and the FinnLight is available with Sako size S, SM, M, and L Sako actions.

As with most Sako 85s, barrel length, overall length, weight, and magazine capacity vary depending upon action size.

Browse our online store for new and used bolt-action rifles for sale.