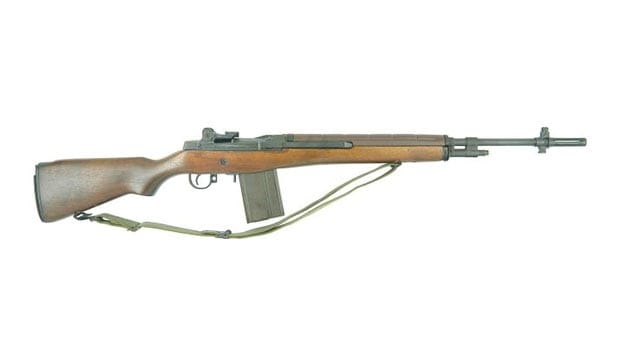 The M14 is a select-fire assault rifle chambered in 7.62 NATO. The M14 was an integral military weapon in the mid-20th century, primarily in the years 1959 to 1970. It was designed to provide a single-weapon-replacement for the M1 rifle, the M1 carbine, the M3 and the M1918 Browning Automatic Rifle.

At the time, the military sought to simplify weapons logistics by providing troops with a weapon that could function in the same capacity as the aforementioned weapons. It was originally manufactured by Springfield Armory, which began production in 1957. More than 1.5 million were eventually produced, many of which are still in operation today.

The M14 employs a gas operated loading system. This means gas released from the firing of an individual round is cycled through a tube, directed into a valve on the bolt, and used to push the bolt rearward. It also uses a 20-round box magazine and has a 700 to 750 rounds/minute rate of fire.

The M14 was an effective weapon in its own right. The heavy rounds easily penetrated the dense cover of the Vietnamese jungles where it was used during the Vietnam War. In addition, it proved a reliable weapon in a number of adverse conditions. However, the wood stock construction tended to swell in the humid tropic conditions, rendering the sights less accurate. Hence, it predictably failed to serve as an adequate all-in-one replacement for its four predecessors. As a result, it has been largely superseded by the M16 rifle.

However, a number of M14 variants are still in use today within several branches of the US Military, often in a marksman or sniper rifle capacity. Springfield currently makes civilian versions called the M1A.