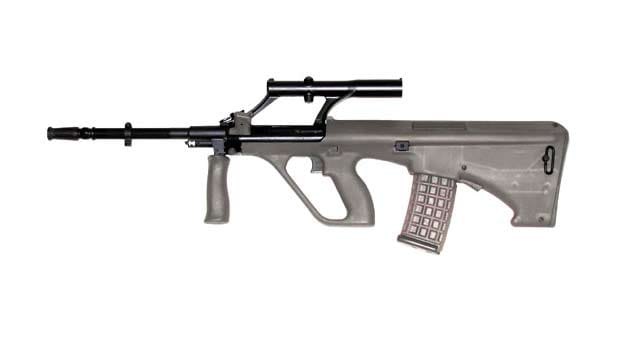 The Steyr AUG is a select-fire assault rifle chambered in 5.56 NATO. It was originally designed in 1977 by Steyer Mannlicher, an Austrian firearms manufacturer.

The AUG acronym, translated from German, stands for Universal Army Rifle. The AUG has given way to a family of firearms including submachine guns, carbines and a plethora of rifle variants.

The Steyr AUG brought to the fore several characteristics indicative of the mid-20th century weapons development zeitgeist. The recognizable molded polymer butt stock was one of many advances that sought to use polymers and plastics in the manufacture of automatic firearms.

Another unique feature is the rearward in-stock housing of the action mechanism. Designs like that of the AUG in which the action is housed behind the trigger are known as bullpups.

In addition, AUG inaugurated the use of transparent magazines, allowing the shooter to visually conduct a round count.

The AUG employs a gas-piston closed bolt operating system similar to the AK-47, in which propellant gases are caught in a tube near the muzzle. The trapped gas then pushes a piston that drives the bolt mechanism rearward.

The AUG also features a Spz-kr two-stage trigger system. When the trigger is pressed to a clearly felt resistance point, the AUG fires in semi-auto. Depressing the trigger beyond this point engages fully automatic fire.

The AUG also uses a Swarovski Optik 1.5x telescopic sight that doubles as a carrying handle. Incredibly versatile, lightweight and cost-effective, the AUG and its plethora of subsequent variants are still in use today in many of the world’s armed forces including Djibouti, Luxembourg’s Grand Ducal Police, the Falkland Island Defense Force, and the US Immigration and Customs Enforcement just to name a few.

Steyr now offers a civilian model for general use.