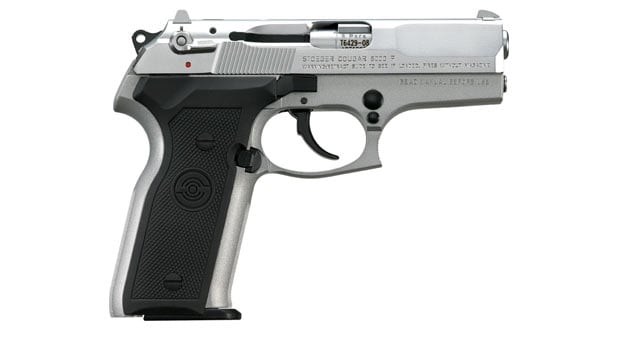 The Stoeger Cougar is a semi-automatic large-frame pistol chambered in 9mm, .40 S&W and .45 ACP. The history behind the Cougar is a little complicated.

Originally manufactured by Beretta, but because of production changes Beretta dropped the model and replaced it with the PX4 Storm. At the time of the change Beretta owned Stoeger and, in a nutshell, gave Stoeger the design. Although the Cougar’s manufacturer has changed, the design is still relatively intact.

The Stoeger Cougar has an ambidextrous safety that works as a de-cocking lever, so shooters can change between double and single-action. Its Bruniton finish doesn’t glare, is corrosion resistant and comes in black, silver, and silver and black. Its ergonomically friendly grip is a very popular feature. Most ergo-grips have finger grooves, but the Cougar’s is bigger and round. And, its most popular quality is its price—less than $500.

The .45 caliber Cougar is the newest edition to the series and it is only available in black, but it has a Picatinny rail for easy mounting of a light or laser.

Stoeger recommends the Cougar for home defense and law enforcement.

Browse our store for new and used handguns for sale.