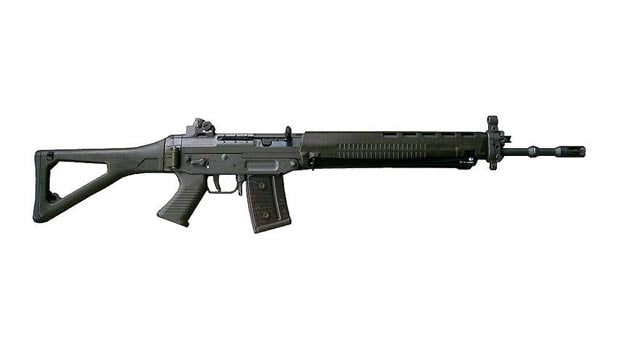 The Swiss Arms SG 550/551 is a select-fire assault rifle chambered in a 5.56 NATO and is the current issue rifle of the Swiss Armed Forces. Manufactured for the military and police market by Swiss Arms AG, the 550 and the shorter, lighter carbine version, the 551, both have an operating system very similar to the Russian AK-47, but with more precision touches indicative of its Swiss bloodline.

The rifle is based on the earlier 5.56mm SG 540. Development of the Sig 550/551 began in 1978 when the Swiss Army began searching for a new assault rifle design. The army wanted a lightweight rifle that was accurate up to 300 meters and had a modular design that could be reconfigured for several variants. Sig soon submitted the SG 541, which was accepted by the Swiss military but renamed the Sturmgewehr-90 or Sig 550. The rifle was officially adopted into service in 1990.

The Sig 550/551 has a gas-piston long stroke operating system, where propellant gases are captured into a port near the muzzle, the gas is then directed onto a piston and pushes it back in turn drive the bolt to the rear. The bolt then ejects an empty casing and loads a fresh round. Surplus gas and powder residue expel through an exhaust port in the gas tube. The advantage of a long stroke system is more immediate chambering, but the disadvantage is the long piston creates more movement and can disrupt point-of-aim.

It also has an adjustable gas valve with two settings. One is for firing the weapon when it’s clean and two is for when it is dirty.

The receivers of the 550/551 series made from stamped steel. It can be set on semi-auto or full-auto, but an additional module can also be installed to allow it to fire a 3-round burst. The 30-round magazines for the rifle are made of polymer and have nubs and sockets that allow them to be snapped together and used side-by-side for quick reloading in combat. It’s issued with a side-folding, skeletonized polymer butt stock, and has a rotary diopter rear sight, which provides four sight stations: CQB, 100m, 200m and 300m. It is also adjustable for elevation and windage.

About 600,000 models have been manufactured since 1986 and the rifle is still in use today around the world. In addition, there are several variants of the 550/551 that are available in the tactical and civilian markets.