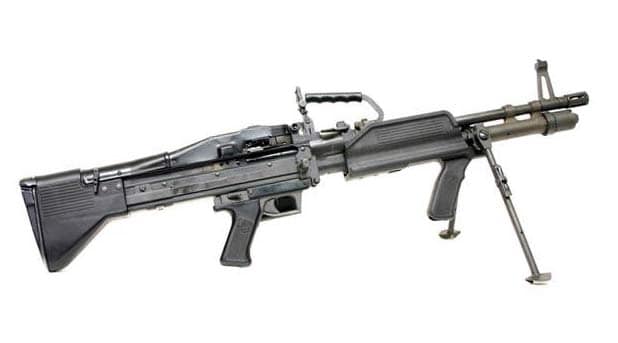 The US Ordnance M60 is a general purpose machine gun chambered 7.62 NATO. It was officially adopted by the US Army in 1957 after over a decade of development and served, most notably, as a squad automatic weapon during the Vietnam War and was also employed ubiquitously by militaries worldwide.

In the 1980s the US military slowly began implementing other machine guns such as the M249 SAW, a 5.56 NATO machine gun, and several years later in the 1990s the M240, a lighter version similar to the M60.

The M60 is belt-fed, and commonly employing disintegrating links. It has a 500 to 600 round-per-minute rate of fire. The M60 has an open bolt, gas-operated firing system. This means that the firing mechanism holds the bolt back before firing and when the trigger is pulled, a spring then pushes the open bolt forward, loading a shell into the firing chamber while closing, and then firing a round.

The captured pressurized gas from the spent round is then employed to eject the casing and repeat the entire process. The M60 can be fired from a tripod or bipod, and can also be fired without the aid of a rest. A variety of ammunition is compatible with the M60 including tracer, ball and armor piercing types.

While in use in Vietnam, a number of design drawbacks impeded the effectiveness of the M60. Its weight of 23.15 pounds was an immediate hindrance to overall shooter mobility. In addition, the locking lugs tended to chip, shortening the service life of the barrel and bolt. An unconventional safety, requiring an upward movement in order to ready fire, often confounded soldiers who were accustomed to M16 and other weapons that utilized a downward safety motion. In addition, the gas and fire control systems could be improperly assembled, allowing the gun to fire, though improperly. Doing so often caused malfunctions.

Although it has been largely replaced by the M240 in US service, the M60 continues to be used in current global armed forces. The M60D, just one of numerous M60 variants, is currently produced by US Ordnance.