The Big Three Rifle Scope Adjustments: understanding how they work

So you just laid down a stack of green on the latest, greatest and most expensive rifle in the world.

Good for you, but realize that if you don’t have a world class scope or other optical device to go with your long gun (and an intimate understanding of how to properly use that sometimes enigmatic piece of hardware), you’ll never get to witness your rifle’s full potential.

The three most common adjustments for any rifle scope are for elevation, windage and parallax. Some scope manufacturers set the parallax at the factory, so while that may not require adjustments, but for the sake of understanding it all, let’s consider the ones without that feature set in. The other primary thing to understand here is that most scope adjustment increments will be in either inches, or MOA or 1/4- or 1/8-inch increments.  The user manual will indicate whether your scope is in MOAs or whether each click of the scope turret is in increments.

Windage is commonly understood in MOA, which is expressed in inches.  MOA stands for ‘minutes of angle’ and adjustment increments are made by turning the scope turret. The scope on your rifle should show clearly which direction you should turn the turret to make whatever desired adjustment you may wish. Some less expensive models don’t have that feature and you can safely use it as a barometer of quality. 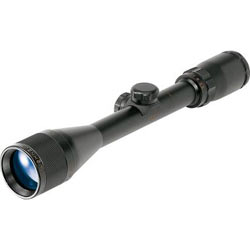 Every click represents one minute of angle, which roughly translates into an adjustment of about an inch at 100 yards, but to understand why this is, it’s probably a better idea to start by explaining what MOA actually represents:

Each of these minutes is in and of itself a small angle, but you can use these small angles to adjust you gun sights because this distance covered by the MOA is relative to the circumference of your target.  To calculate the MOA:

In theory, knowing what this represents should allow you to calculate the MOA at any distance, but a good rule of thumb is that changing a sight’s elevation setting by one minute of angle changes the bullet’s impact point by one inch at 100 yards.  How this translates to clicks on your scope turret though is something you’ll need to find out on the range.

The thing you have to be aware of that is not all scopes are calibrated for MOA or precise to the inch.  This means that though the theory behind MOA is carved in granite, how your scope incorporates that theory versus another scope can be vary greatly and you will not be able to gauge what a click means until you’ve seen in it action.  By way of an example, if I place a few shots about an inch to the right of where I’m aiming at 100 yards using a favorite Leupold scope of mine, I need to turn the windage turret three clicks to the left (the scope should indicate which way to actually turn the turret in order to move the impact points in the preferred direction).

That should take care of the windage questions, but what about the elevation issues?

Well, good news. The elevation turret operates on the same principle MOA principle and works identically to your windage turret, except that adjustments to it move the up and down impact points of your rounds.  Adjusting elevation works on the exact same principle as windage.

Adjustment turrets are normally found at the top of the body of the scope but, as before, some of the less desirable scopes may not have them on there.

In the past, a lot of optics manufacturers set the parallax at the factory to keep us plebes from tinkering with it, but with the advent of these high-end tactical scopes, shooters started getting access to parallax adjustment features. It’s just me, I know, but I would cough up the extra money for a good high-end scope that allows adjustments for all three features. 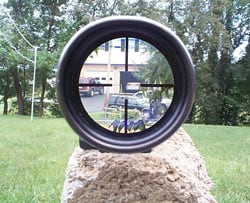 As simply as it can be put, parallax can be described as the apparent movement of the target as it relates to the reticle when you move your eye away from the exact center point of the eyepiece. Huh? What that means is that it occurs when the target’s image does not fall on the exact same optical plane as your scope’s reticle. And that obviously can cause a slight shift in your point of aim (and here all this time people thought I was just lying there brain-dead behind that sniper scope!).

The effects of parallax under normal circumstances are very minor, so it should not be too much of an issue say out around 100 meters but at extreme ranges, having the ability to adjust the parallax becomes enormously helpful, such as when precise and accurate shots are required at those distances. And isn’t that like all the time?

In order to adjust those parallax settings, do the following:

Now, take a few long and deep breaths while exhaling very slowly. After about the third of fourth one, and in-between those breaths as you feel your heart rate slow to next to nothing, gently squeeze the trigger through. Presto, chango, that target just disappeared. Congratulations!