Red Dot Sights and Co-Witnessing: What's it all about? (VIDEO)

Are you thinking about getting a new red dot optic or just got one?  Worried that the one you have your heart set on makes your iron sights nearly impossible to use?  Then I highly suggest you check out the facts about co-witnessing.

What is a Co-Witness?

People employed in the tactical fields know it’s a good idea to pair Red dot, reflex and halo sights with iron sites.  This combination is most often employed on the AR family of rifles and when both sights are lined up together, it what is known as co-witnessing.

Why perform a Co-Witness?

That’s a good question because really, when using a red dot-style sighting system, all the shooter needs to do is aim the dot at the intended target and smoothly manipulate the trigger.  The red dot does not have to co-witnessed to precisely hit its target, all that’s needed is good marksmanship fundamentals. New shooters however may attempt to do this when the rear sight is in the down position, making co-witnessing not only unnecessary but potentially a detriment to novices. 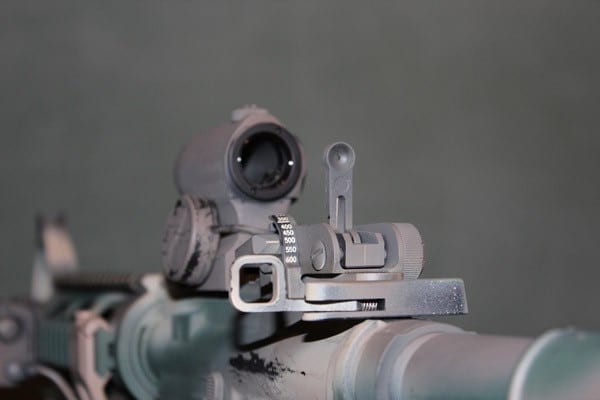 AR-15 with back sight raised.

So, when is a co-witness used? According to Kenan Flasowski with www.FAST762.com, shooters and operators had to co-witness 15 years ago mostly because the batteries in the optics weren’t as good as they are today.   “You had to be on your iron sights incase your red dot wasn’t there,” says Flasowski, a retired Special Forces sniper and assaulter.

With advances in technology, some batteries in certain optics can be left on for three years and still work. Other optics don’t ever need batteries.

Today there are only two reasons to ever perform a co-witness outside of training or just goofing around. First, prior to establishing a combat zero, performing a co-witness by lining up the red dot to the iron sights is a good way to get the mechanical zero of the red dot.  This is assuming the iron sights are sighted in properly.

Secondly, performing a quick check of your sights by a co-witness verification might be a good idea if the optic gets bumped, the iron sight windage gets twisted or, lastly, incase the shooter needs that “warm and fuzzy” feeling that his/her sights are aligned.

How to implement a Co-Witness

Picture this: the carry handle of an AR-style weapon has been removed, revealing a flat-top picatinny rail underneath that accommodates a flip-up rear sight aperture (the ridged front sight assembly of the A2 family can stay put or can be replaced by a folding front sight). 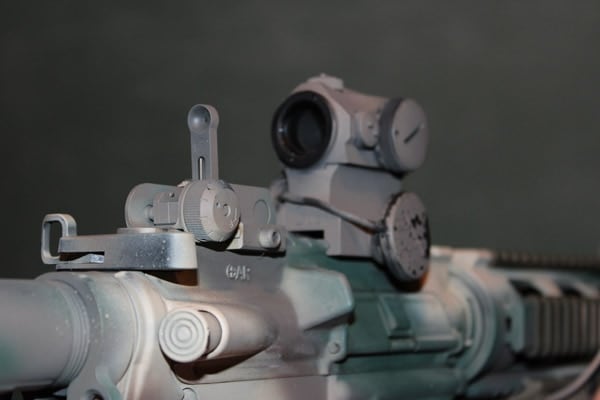 Mounted just in front of the backup sight on the top of the upper receiver is a red dot, reflex or halo sight. First, it is important to get the right spacer. The spacer goes between the flat-top rail and optic and there are (at least) three different heights.  If the front sight is fixed (does not fold down), the spacer should be a bit higher so the front sight assembly doesn’t interfere with the shooter’s vision and the red dot.  Note that it is possible to mount an optic with an AR carrying handle in place with a special mount, but we’ll just look at the standard co-witnessing configuration.

According to Flasowski, while peering through the window of the optic and with both the rear and front sight in the “up” position, the co-witness iron sight line-up should be in the lower third of the optic window.  Naturally, this would allow enough room to use the flip-up/back-up iron sights in an emergency (i.e. in case your optic breaks, gets shattered or falls off the rail) while keeping the front sight low enough to keep it out of the way for the practically endless power of the red dot sights.