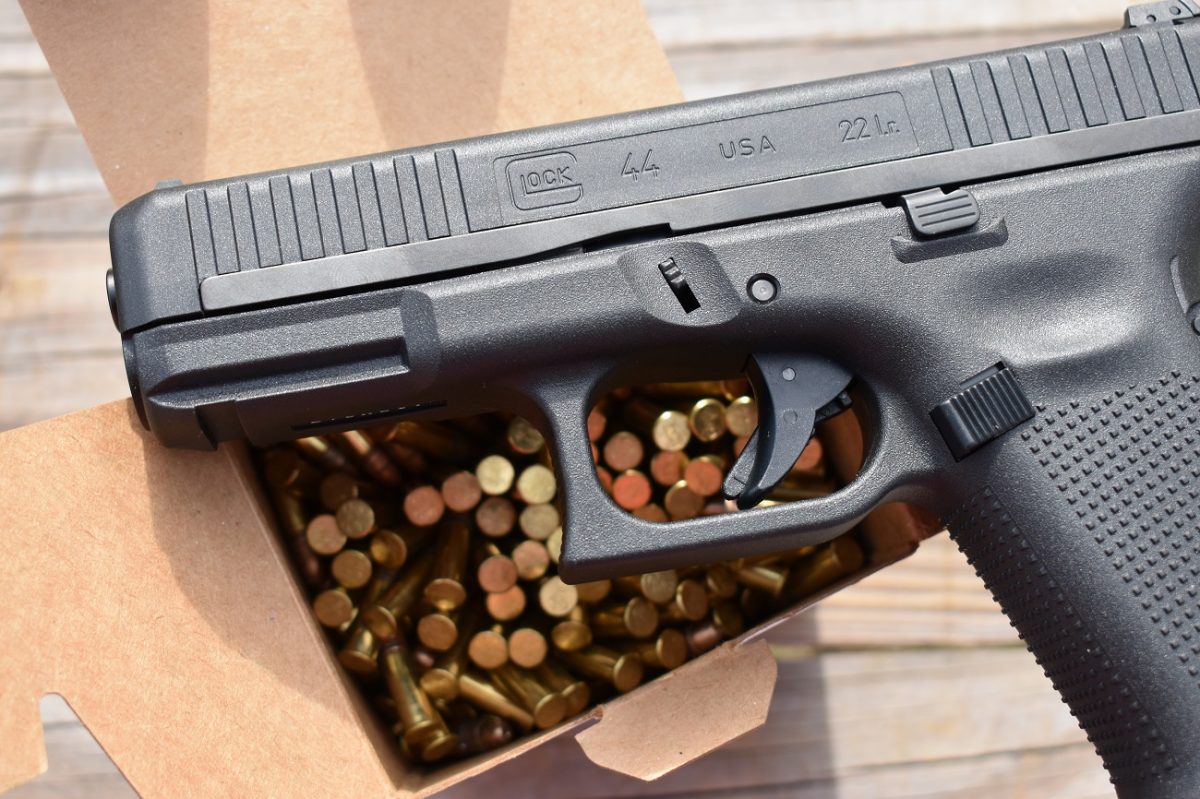 The Glock G44 is a lightweight but reliable .22LR that does not scoff at bulk pack ammo, all while proving a dress rehearsal for a G19. (All Photos: Chris Eger/Guns.com)

Pitched by Glock as a pistol designed for “new shooters, sport shooters and everyone in between,” the G44 has a lot going for it.

Debuted last month after a cryptic build-up, the G44 features an innovative hybrid steel-polymer slide and the ability to adapt to any user’s hands via backstraps supplied with the pistol. Glock’s first rimfire handgun, it is designed to emulate the crowd-pleasing G19, using a 4.02-inch barrel which produces an overall length of 7.28-inches– the same as the popular 9mm mid-size. Likewise, they have the same 5.04-inch height, a factor which means most G19 holsters will work for the G44, should you want to carry the 22LR on the trail or around the ponderosa. 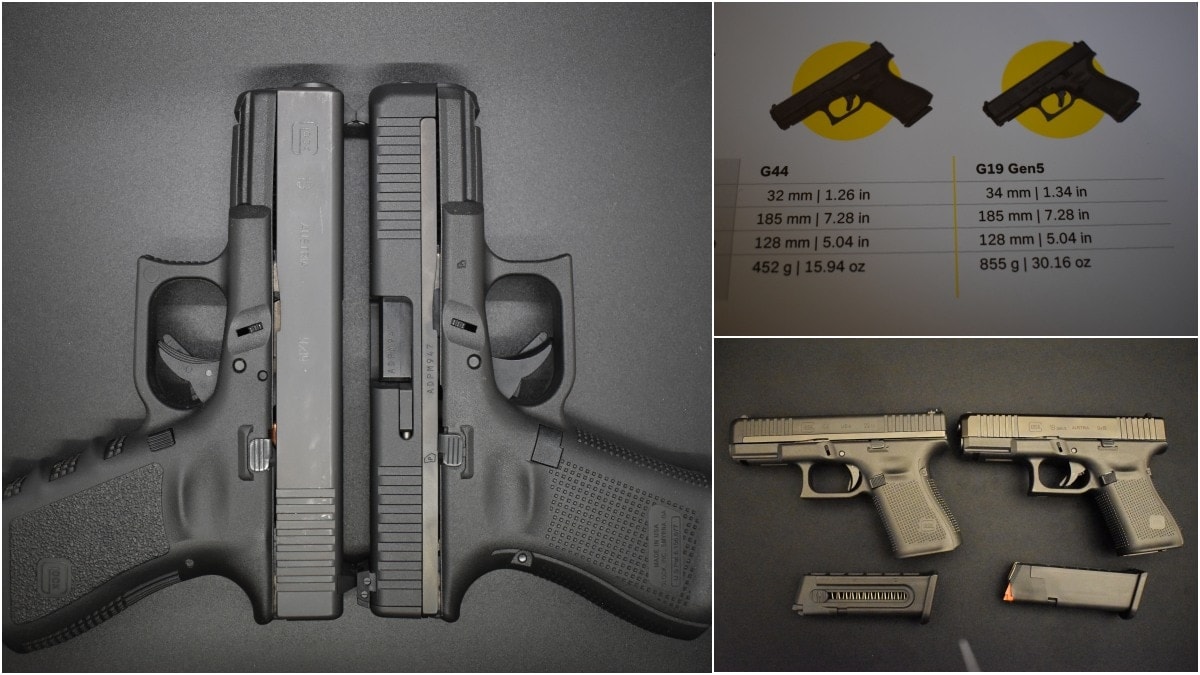 The G44 and the G19 are doppelgangers in profile, although not in weight, magazine capacity or caliber.

Where it departs the G19, which has a 15+1 capacity and 30-ounce weight, is that the G44 runs a smaller 10-shot rimfire magazine and only weighs about half as much.

Why a 10-round mag when other companies have 22LR plinkers with up to a 33-round capacity?

Glock explained that, if they had their name on a rimfire, they wanted it to be as reliable as possible. To some extent, this resulted in a 10-shot mag that is crafted where it is almost impossible for a cartridge to not feed correctly. 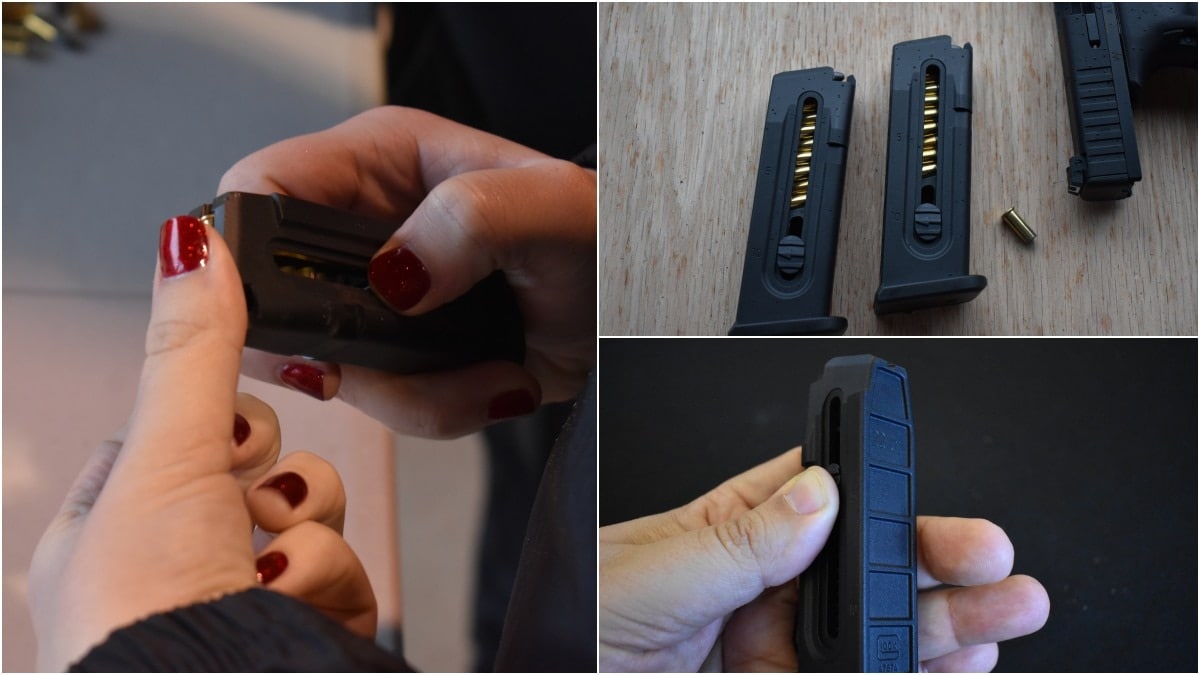 The single-stack 10-shot G44 factory magazine is distinctive, with a waffle back and easy to load hold down on the left-hand side of the mag body. It stacks the rounds properly and is comparable in capacity to the 10-round mags seen on the Ruger Mark IV series, Browning Buckmark and the S&W SW22 Victory. 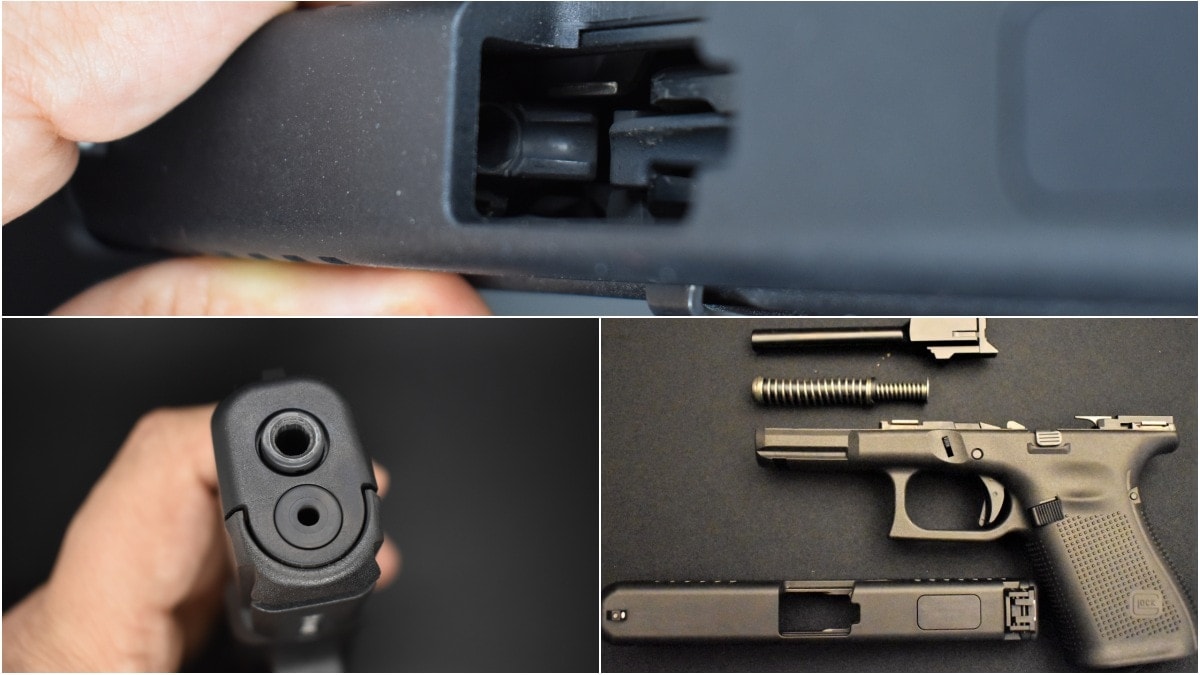 The break down on the G44 is much like any other Glock, although the hybrid polymer/steel slide and diminutive barrel– which has a fluted chamber– are a departure from the rest of the family tree. 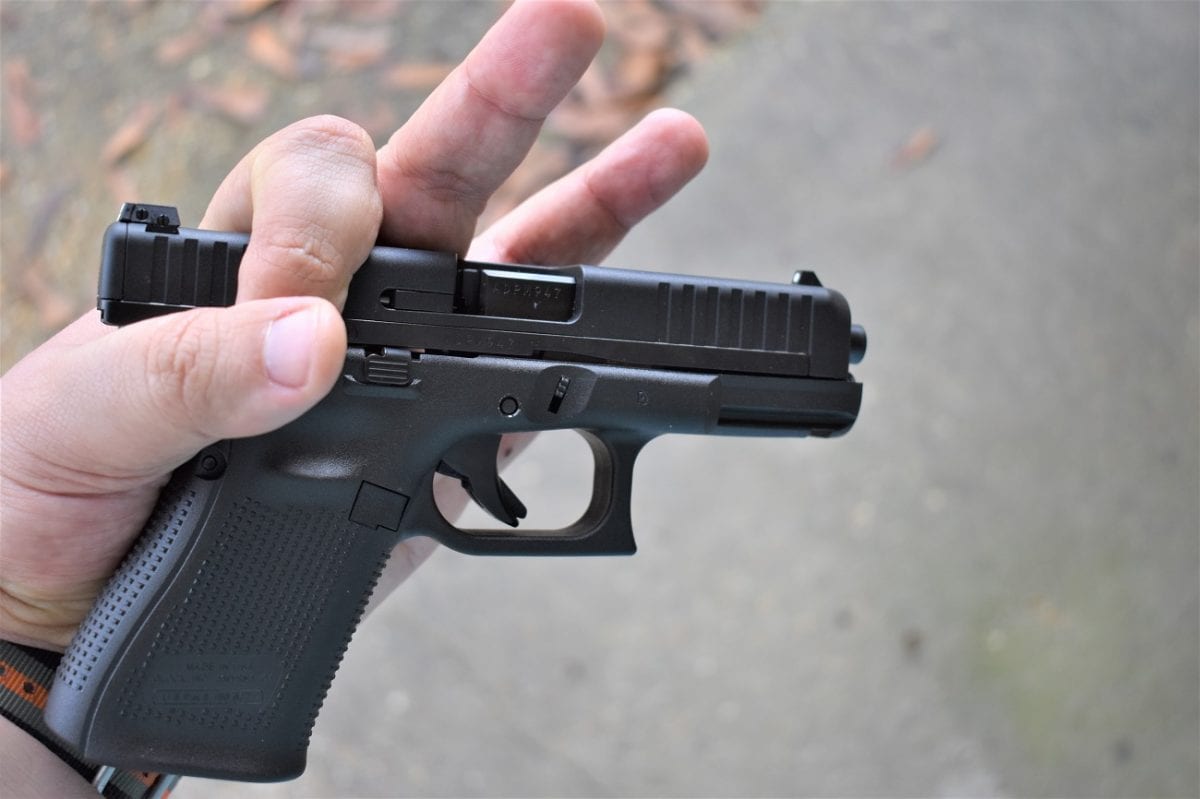 Manipulation and takedown on the G44 are the same as the G19 or any Glock for that matter. 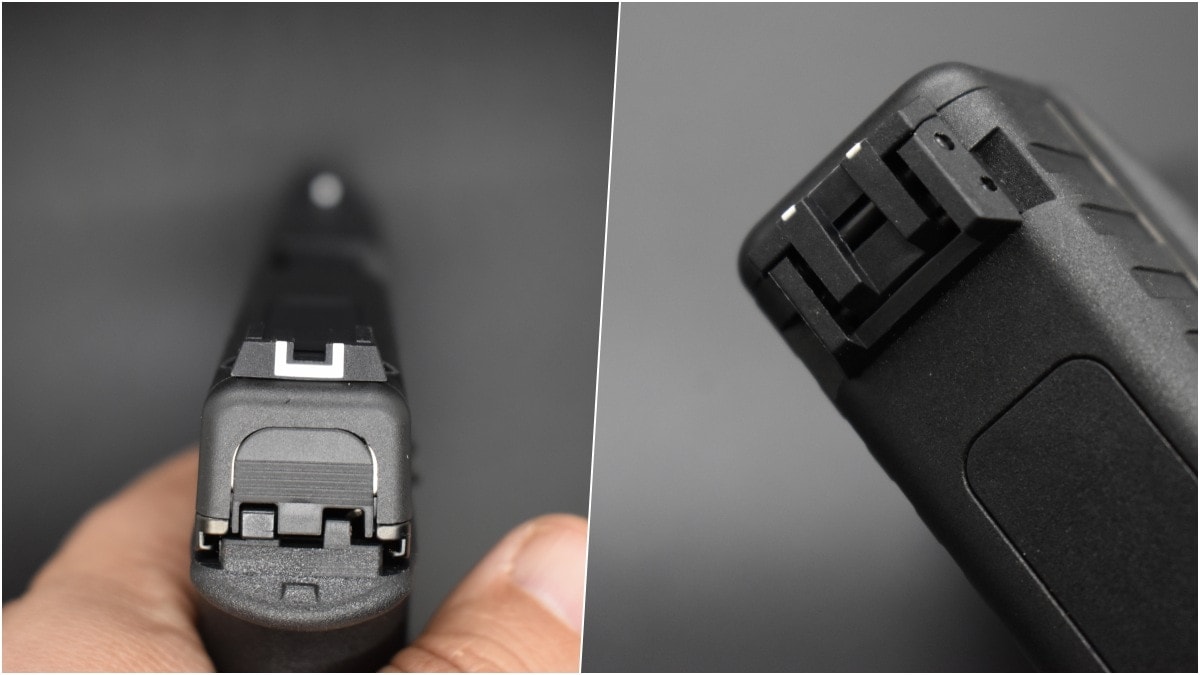 The sights on the G44 have the traditional polymer front post and U-notch rear, although the rear sight is slightly different from standard Glock factory sights due to the need to attach it to the rimfire pistol’s hybrid slide. Nonetheless, Glock says both the rear and front are compatible with standard sights. 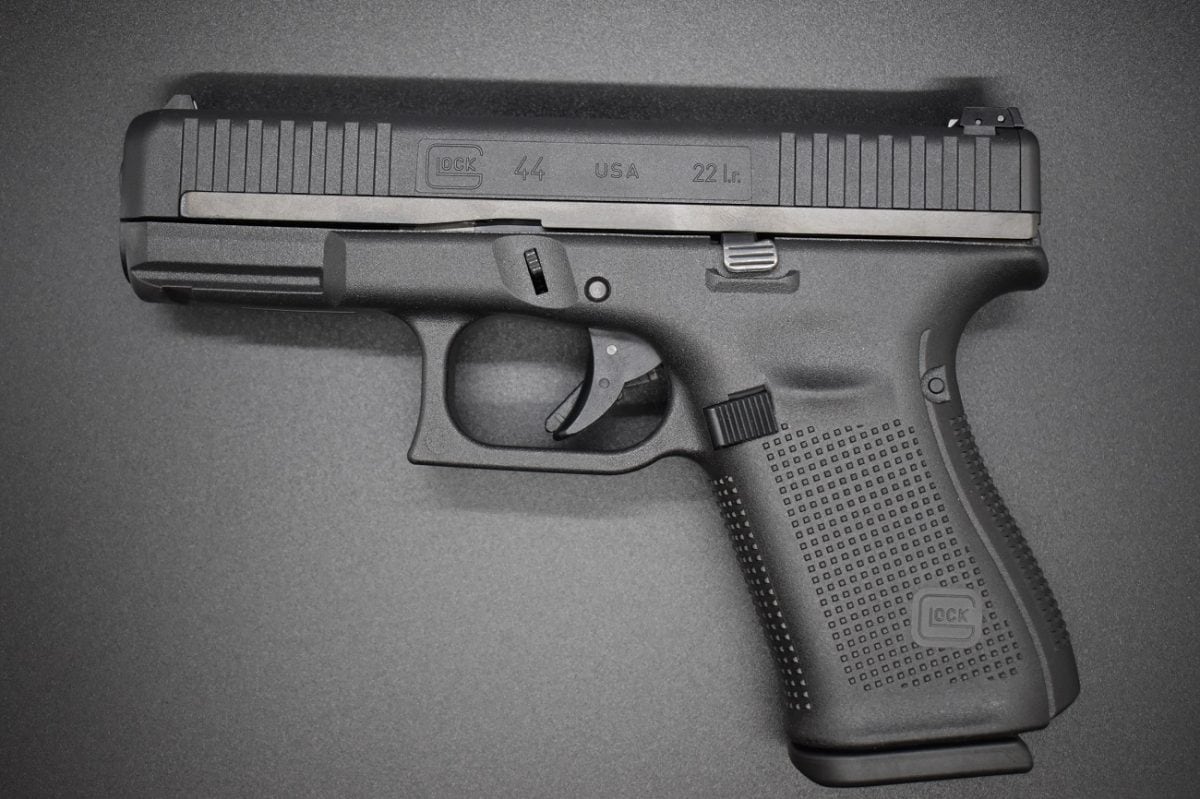 The G44 has much the same features as a Glock Gen5 pistol including a beveled mag well and groove-less grip. Unlike every other Glock, it is a basic blowback action. Unlike many of the competitors’ pistols, it does not have a fixed barrel. 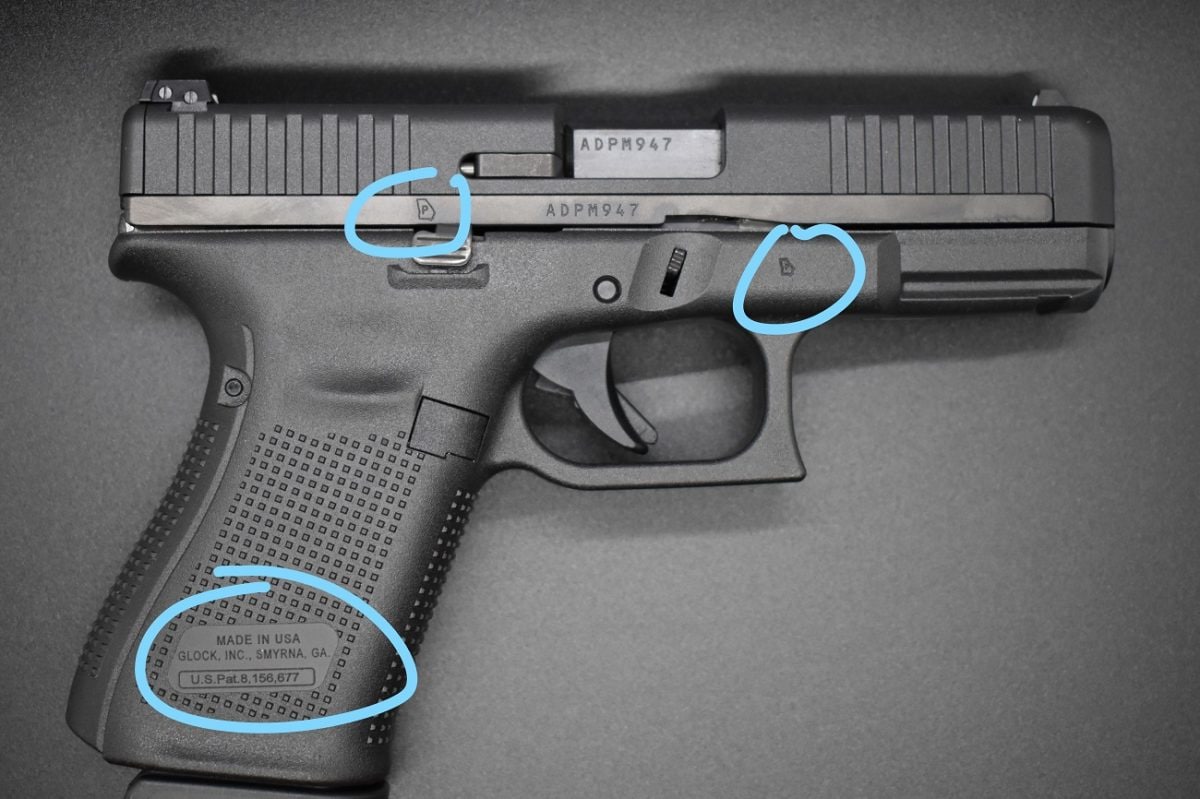 Unlike several manufacturers who license their name to German pistol maker Umarex to produce their scaled-down 22LR handguns, the G44 is made in the U.S. by Glock, as noted by the numerous Georgia proof marks on its frame, slide, and barrel. 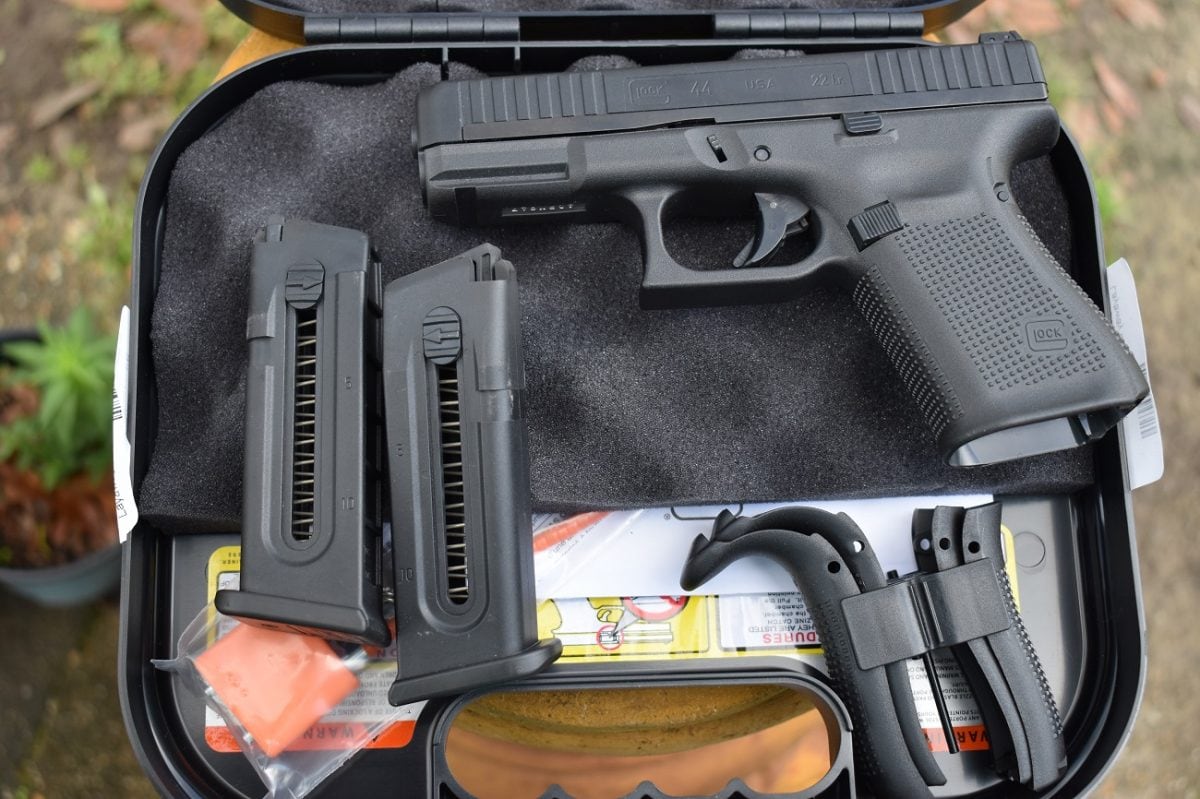 The G44 ships in a regular Glock box with a stack of backstraps and two magazines. 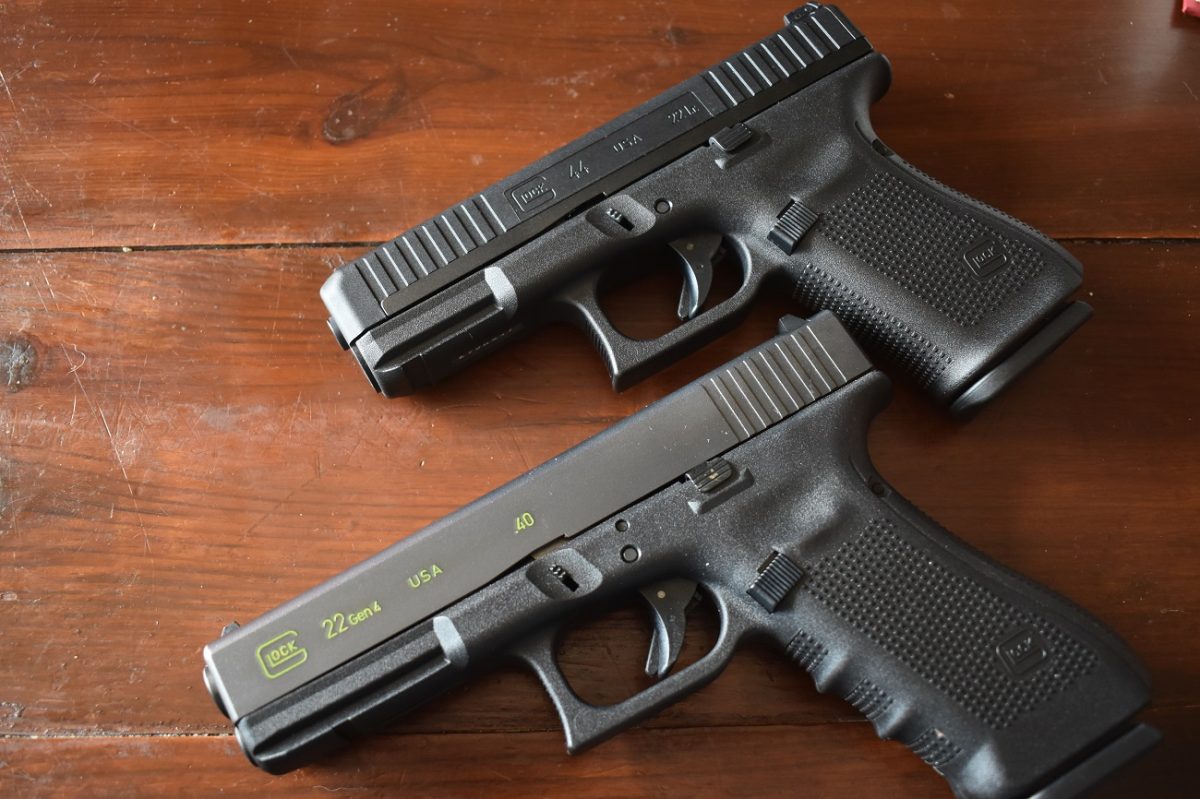 The fundamental problem is that 22LR is a funky cartridge. First marketed in 1884 as a black powder round, the little lead-nosed pipsqueak was intended for use in rifles and revolvers, with its rimmed case proving notoriously difficult for pistols to cycle. Compounding this, there is a myriad of loads in circulation, all with slightly different specs and performance. When you magnify those problems with the fact that the rounds are often produced by the millions as economically as possible, especially in the case of bulk-pack budget ammo, and you get a cartridge that tends to be finicky in a lot of semi-auto handguns.

To get it right, Glock spent nearly three years testing and developing the G44– which is why models like the G45, G46, G47, and G48 passed it up in reaching the market while the rimfire chewer was still in R&D. During that time, they used no less than 141 different rimfire loads in testing, popping over 1.2 million rounds in the process. Federal, which supported the effort, used everything in test guns from 42-grain subsonic to CCI Stingers with no problem. In short, while many 22LR pistols come with the caveat that they are picky about their diet, the Glock is billed as being omnivorous.

For reference, when Guns.com was at the unveiling event for the G44 last month, we were on hand to see a collection of 10 production model G44s cycle more than 12,000 rounds of CCI Blazer bricks in two hours with no jams. No jams. 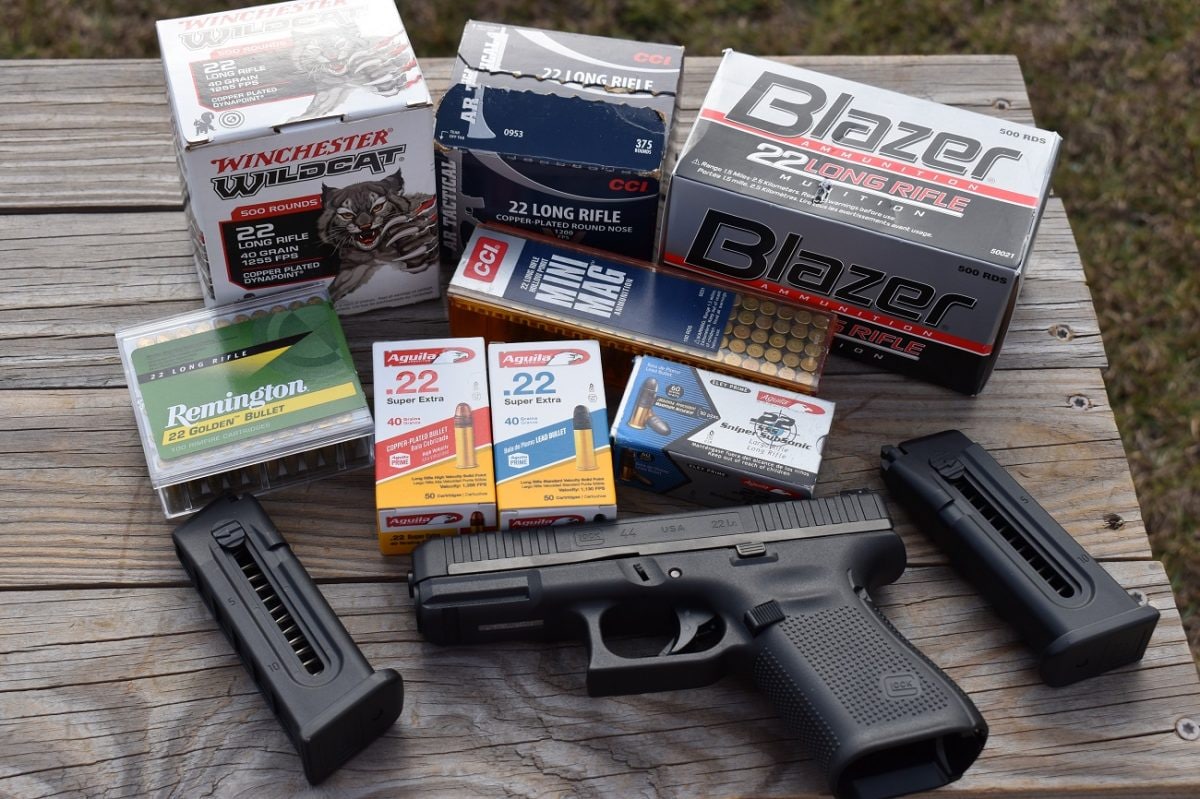 Across 2,200 rounds of rimfire smoking and plinking dreams, based on experience with other semi-auto pistols, you could expect a jam-up or failure about every other magazine or so.

In our test with the Glock, we had three failures: two failures to eject with Aquila Standard lead Super Extra (in the same mag!) and one Remington Golden Bullet that failed to fire, although it had a strong strike mark on the rim. The gun was cleaned at the halfway mark to bust out the heavy crud of lead and powder residue. 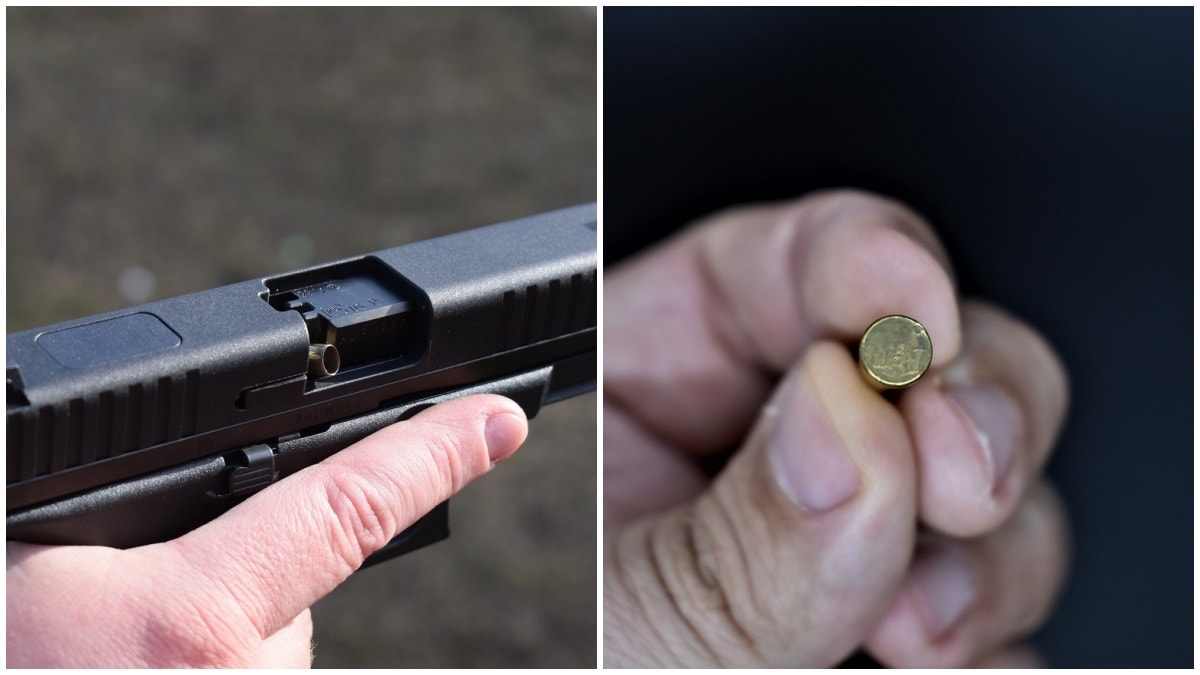 The G44 was super reliable in testing, seeing two failures to eject and one failure to fire, all with ammo that ran on the cheap side. In short, it goes bang when you want it to and with little frustration. 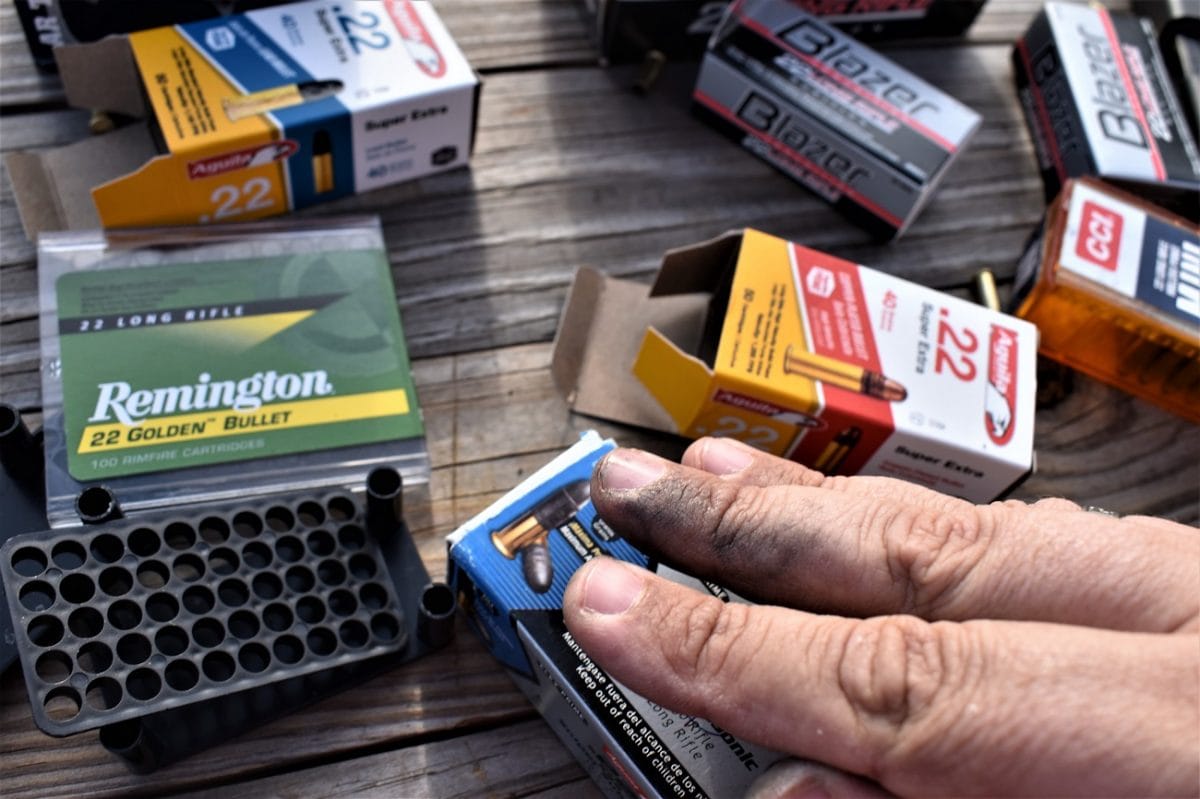 With the same trigger pull of the G19 and a workable sight radius, the G44 is easy to shoot. Steady, even at a one-pound weight, it has almost no recoil, is very consistent, and hangs on target.

Although no Volquartsen match pistol, the handgun still performed well when it came to punching paper. The new Glock rimfire consistently ate the center out of a target at 25 yards much akin to carnival gallery shooting. It should be noted the G44 uses Glock’s new and very accurate Marksman barrel, the same as the rest of the Gen5 models. 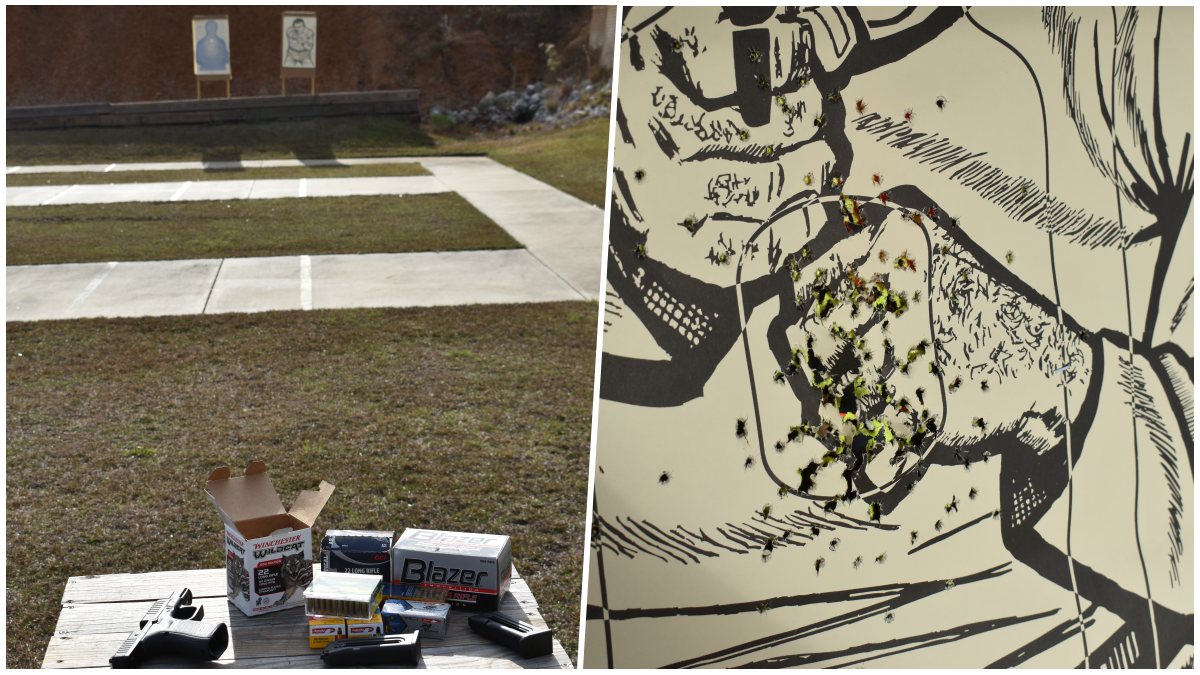 That target looks tiny at 25 yards, but even with semi rapid-fire and alternating left and right-hand only shots, center mass hits were not a challenge. At the Glock unveiling event in December, there were steel targets set out to 108 yards and contact was being made.

When slowing it down, we tried several unsupported strings at 25 yards and ran about 2-ish inches on average. Keep in mind that none of the ammo we used could be considered match-quality. 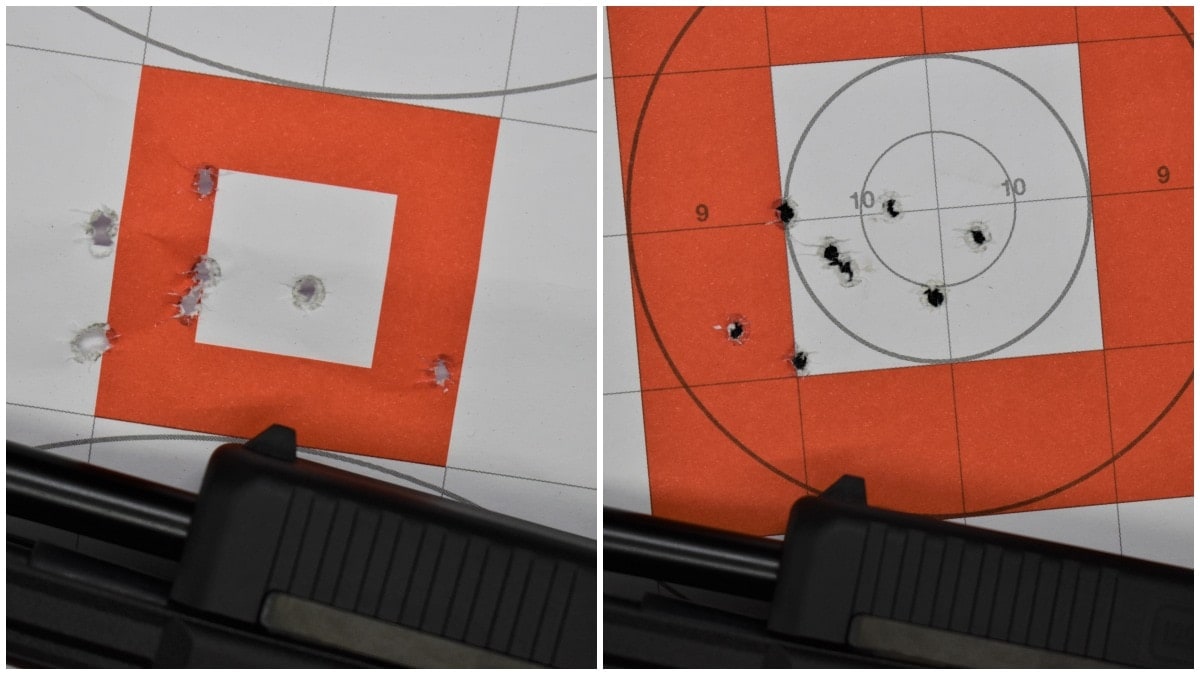 If you ran the G44 from a bench and used some nice Eley Match Slow Pistol or something, I would imagine you could probably dial it in closer than that.

Besides just being a fun gun to shoot– which is crucial to introducing new and budding shooters to the sport– the G44 is an obvious understudy for those who could transition to a more carry-sized G19. Further, those who already have a G19 or similar could benefit from the low-cost live-fire training on the G44, with bulk .22LR running only about a quarter the price of even cheap 9mm ammo.

For those who want a rimfire pistol for use in pest control, or to carry around the campsite or hunting for sheds in the Spring when the nope ropes are active, the fact that the G44 fits standard G19 holsters, and even has an accessory rail, makes it an easy choice. In a pinch and with the right ammo, it could even be used as a defensive handgun, especially for someone shy to recoil. 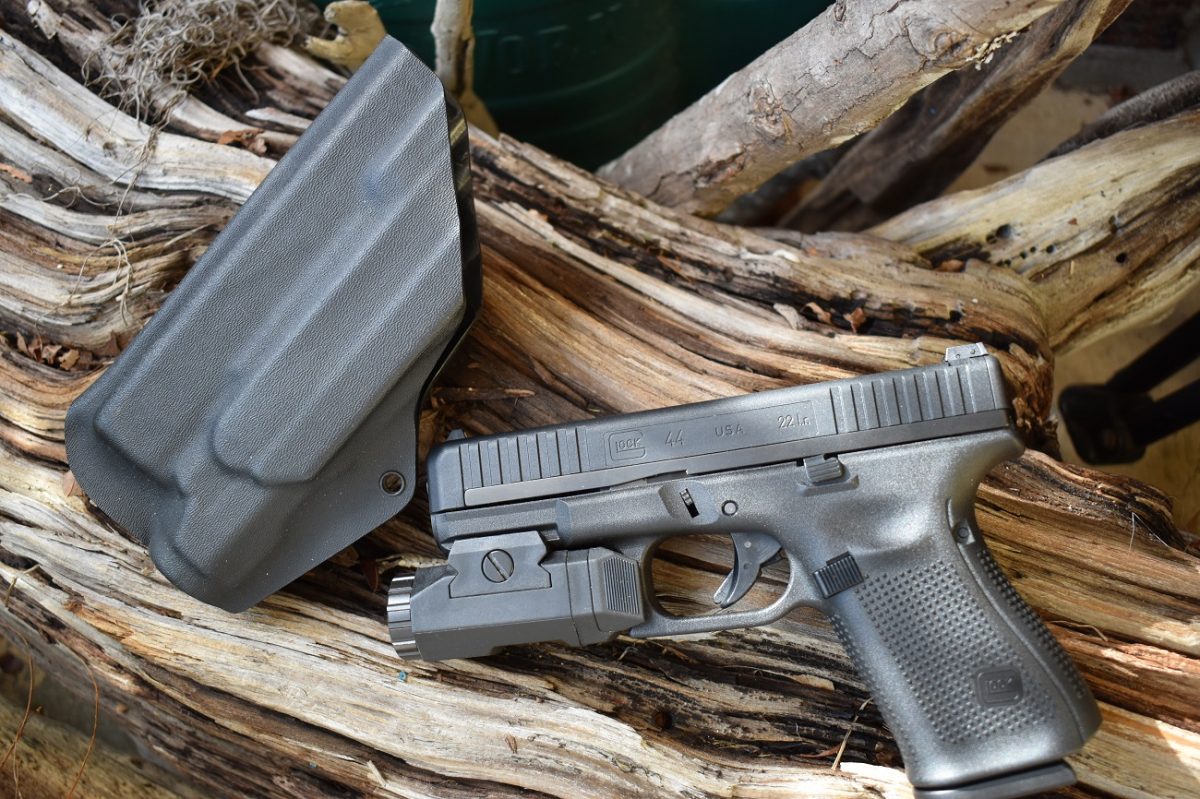 On the downside, if you want to run a can on the G44 and enjoy some quiet time, then you must buy a threaded barrel separately and it uses European metric threads with a 1x28TPI adapter even if you do spring for the extra pipe. Further, magazine capacity is not as high as, say the Taurus TX22 (16+1) or Kel-Tec CP33 (33+1), but neither of those are Glocks.

MSRP on the Glock G44 is $430— a price that will likely be lower at retailers– and will be available after Jan. 20. By comparison, aftermarket sub-caliber kits to convert a standard Glock to fire .22LR start at about $300. With that being said, the top half of the G44 cannot simply be added to a G19 frame due to the guns having different internals, so don’t get your hopes up on that happening.

In the end, if you are looking for a reliable .22LR semi-auto pistol that mimics just about everything about the Glock G19, the G44 is the way. 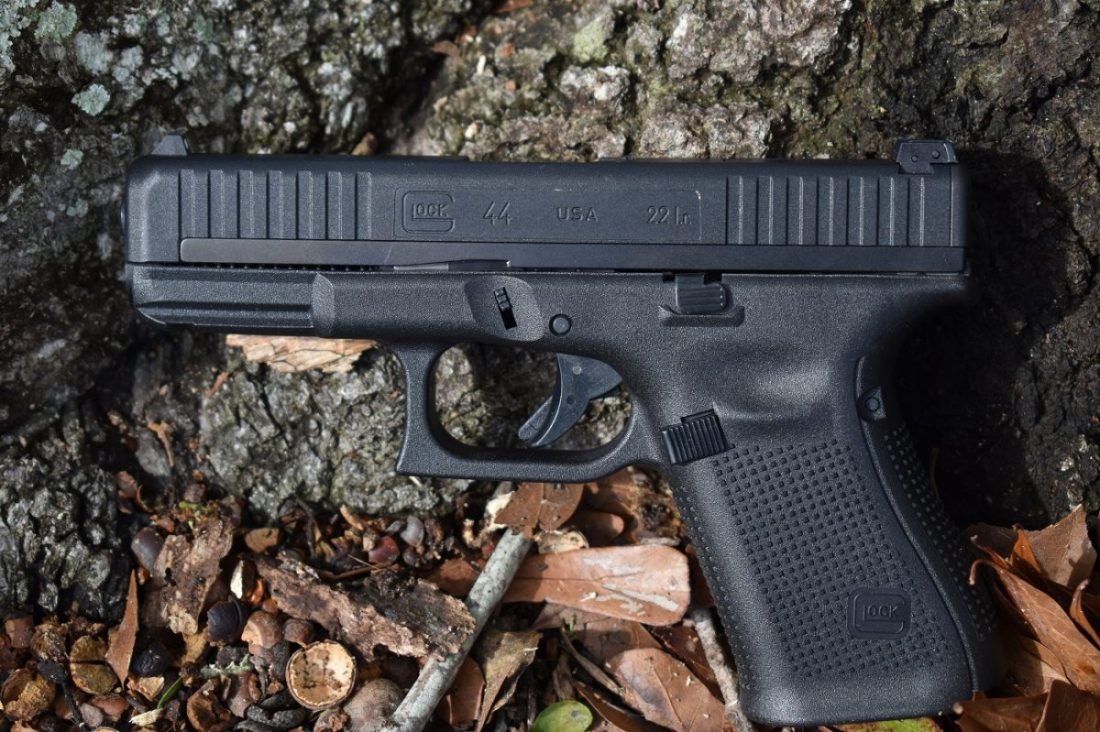