To the delight of Glock fanboys and girls everywhere, the legendary gun maker announced the latest iteration of everyone’s favorite polymer pistols with the unveiling of the Gen. 5. Though Glock fans have long suspected the Gen. 5 series was on the horizon, Glock aficionados were no less ecstatic when the 17 and 19 dropped in late August.

As the G19 is one of my favorite Glock model pistols, I was thrilled when the company agreed to send me the new Gen. 5 19 to test out and compare with my current Gen. 4 model.

The Gen. 5: Let’s judge this book by its cover

The 9mm chambered Gen. 5 series is based around the M pistol developed for federal law enforcement. Off the bat, shooters will notice that the Gen. 5’s exterior says goodbye to finger grooves and hello to a flat style grip. While some users might lament the finger groove removal, I found it to be a definite plus for petite shooters like myself that find the finger grooves cumbersome. The flat grip face allows for fingers to rest naturally instead of forcing them into set areas. This equates to a more solid shooting grip and a more comfortable fit. 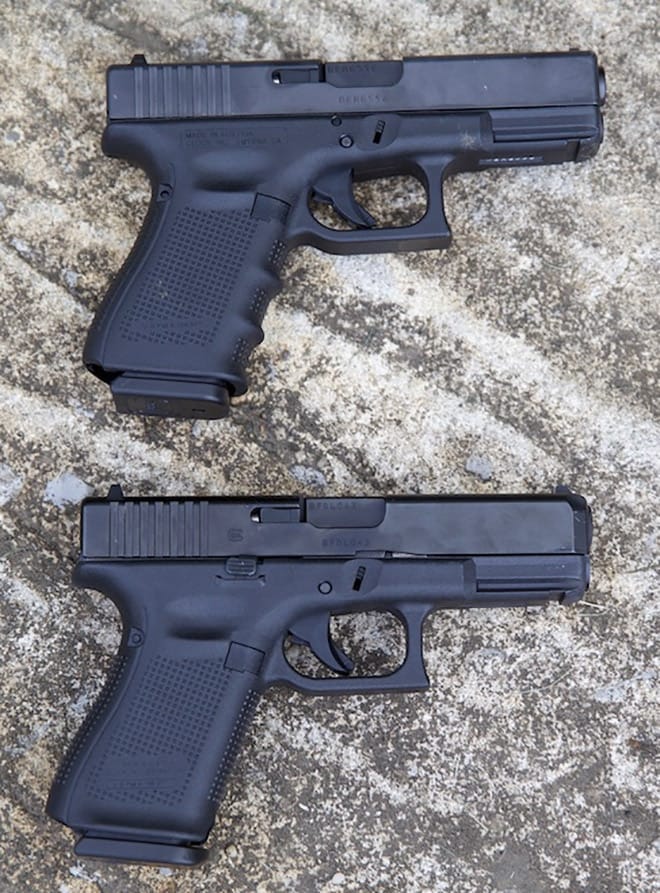 Working our way up the gun, the next notable feature is the addition of an ambidextrous slide stop. Unlike its predecessor, the Gen 5 aims to be southpaw friendly, pairing that additional slide stop with the configurable mag release that can be swapped to the left side. 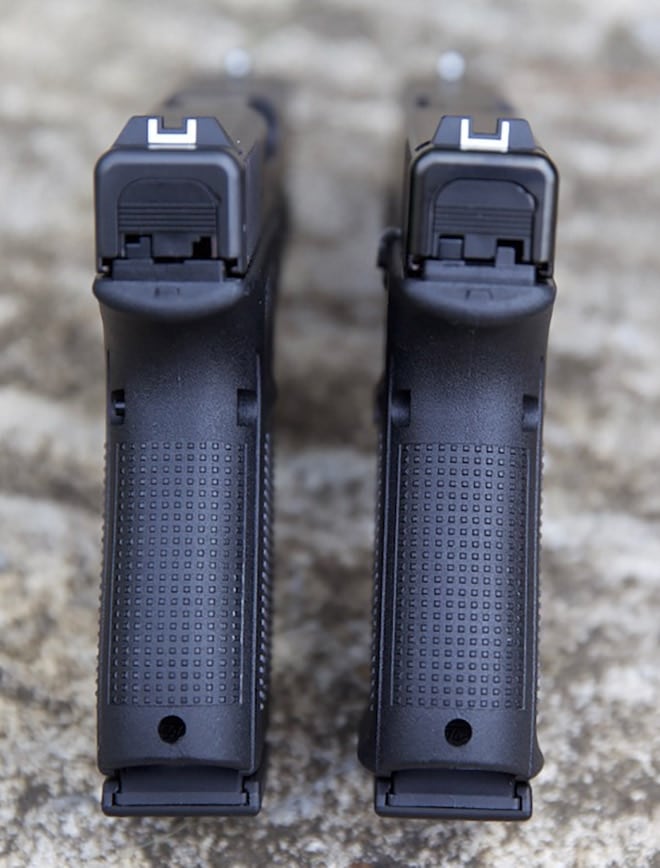 The grip width on the Gen. 5, right, is slightly wider than the Gen. 4. (Photo: Jacki Billings) 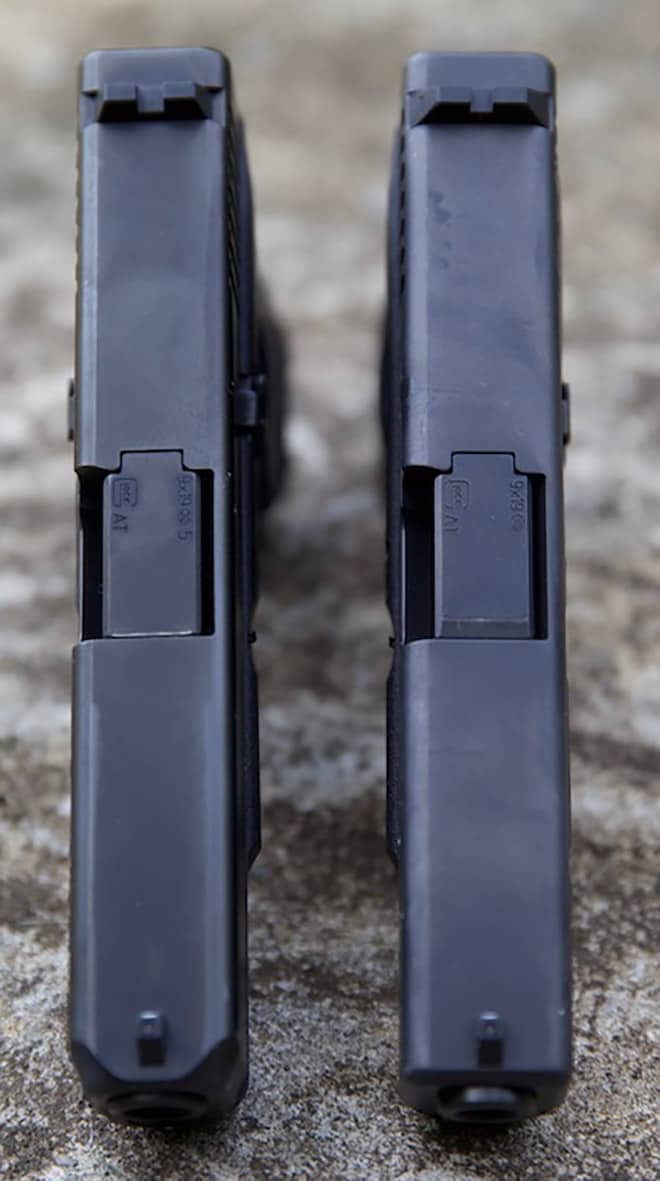 The Gen. 5, left, features a rounder nose than its predecessor. (Photo: Jacki Billings) 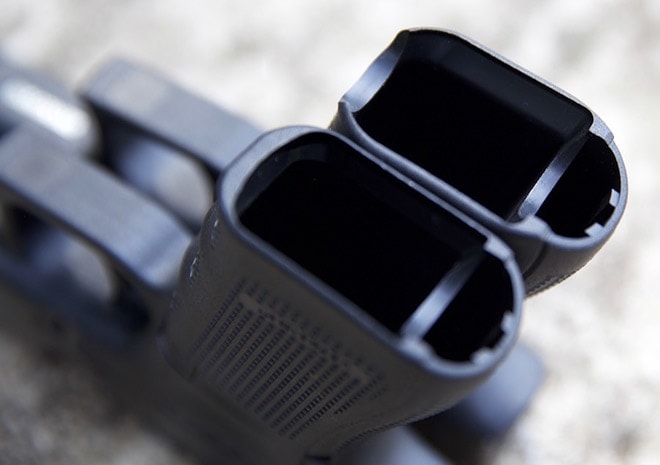 The Gen. 5 boasts a flared magwell design, something its predecessor does not have. (Photo: Jacki Billings)

Moving up the gun further, the Glock shooters will notice the slide and barrel are both revamped for the new generation. The Gen. 5 is equipped with the Glock Marksmanship Barrel, or GMB. The GMB tosses polygonal rifling out the window in favor of a more traditional cut. Glock says the new rifling delivers improved accuracy over the old. Does it really? Well, we’ll get to that in a bit. Both the barrel and the side are finished in nDLC – a tougher, more durable coating that aims to protect against corrosion and scratching. Exclusive to the Gen. 5 series, the coating offers a sleeker appearance; however, keep those wipe rags handy as the finish also attracts fingerprints. 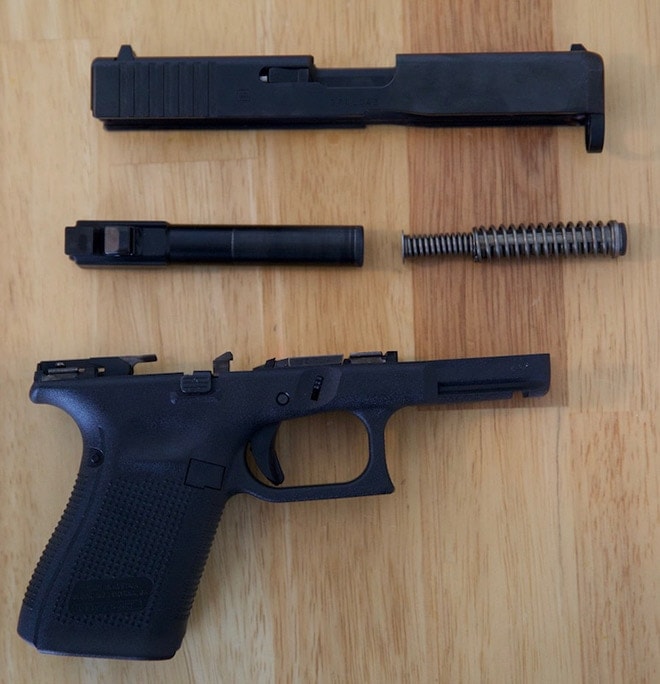 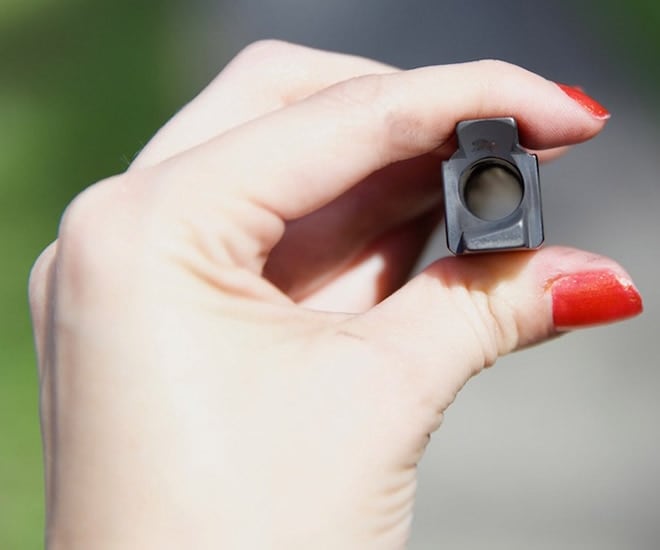 Another external feature that Glock revamps on its G19 model is the magwell. The new Gen. 5 touts a flared magwell that offers a larger workspace for quicker and more efficient reloads. The Glock mags have also been altered for the new generation, now showcasing an orange follower for shooters to easily gauge how many rounds are left in the mag. 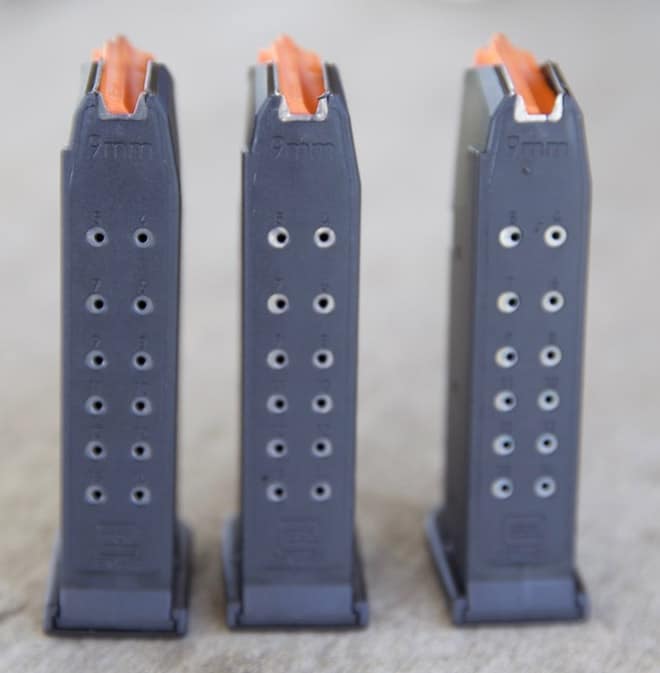 The Gen 5’s mags feature an orange follower making it easier for shooters to determine how many rounds are loaded. (Photo: Jacki Billings)

Dimensions-wise the Gen. 5 mucks around with measurements, clipping millimeters off here and adding there. Barrel length on the Gen. 5 measures ever so slightly longer than the Gen. 4, coming in at 4.02 inches. Tipping scales at 21.52 ounces unloaded without mags, the Gen. 5 lessens the load over its predecessor by 2 ounces. The trimmed down weight, however, is made up for with the gun’s added width. Where the Gen. 4 measures 1.18-inches across, the Gen. 5 is a hearty 1.34 inches.

Though Glock has certainly tweaked the exterior portions of the platform, some of the familiar features remain. For instance, the Gen 5 and Gen 4 both keep to the same overall length, measuring 7.28 inches. Both platforms are also equipped with the same dovetail sights and take down/reassembly procedures. 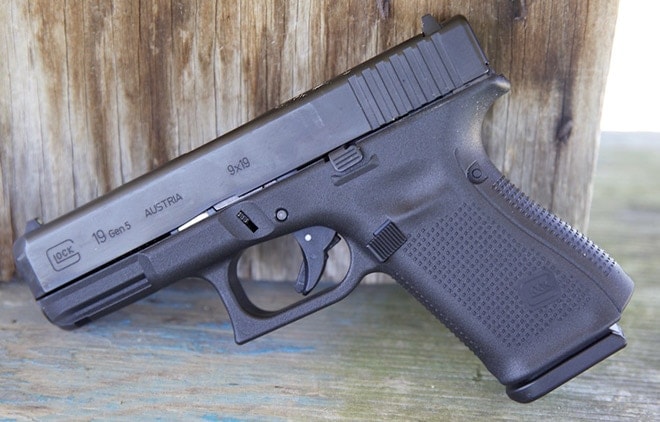 Glock showed its commitment to the latest generation by not only tuning-up the outside, but overhauling its internals. Engineers removed a locking block pin (there’s now two instead of three) and added a firing pin safety similar to that of the G42 and 43 models. A new extractor is also included in the new Gen. 5s as well as reinforced rails.

Glock updated the inner workings of the 19 to offer shooters a smoother but less interchangeable platform. (Photo: Jacki Billings) 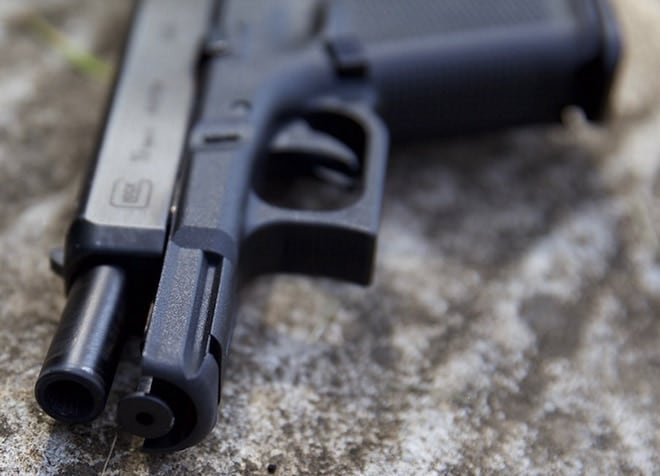 Though the trigger modifications are a blessing for those that like to purchase stock, Glock fans who like to customize their experience might be a little let down. The new internals mean less interchangeability than previous generations. 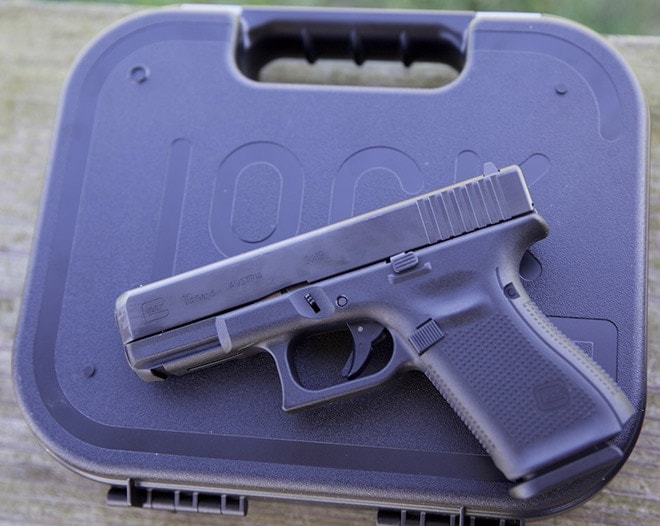 The new generation is based off the M pistol designed for federal LEOs. (Photo: Jacki Billings)

Curious to see if the G19’s shooting style differed from its sister models, I eagerly raced to the range to give her a whirl. Short version – the Gen 5 does not disappoint. In fact, it outpaced my expectations. The G19 is a smooth shooter, much smoother than its predecessor. Not a surprise as Glock overhauled the internal workings. 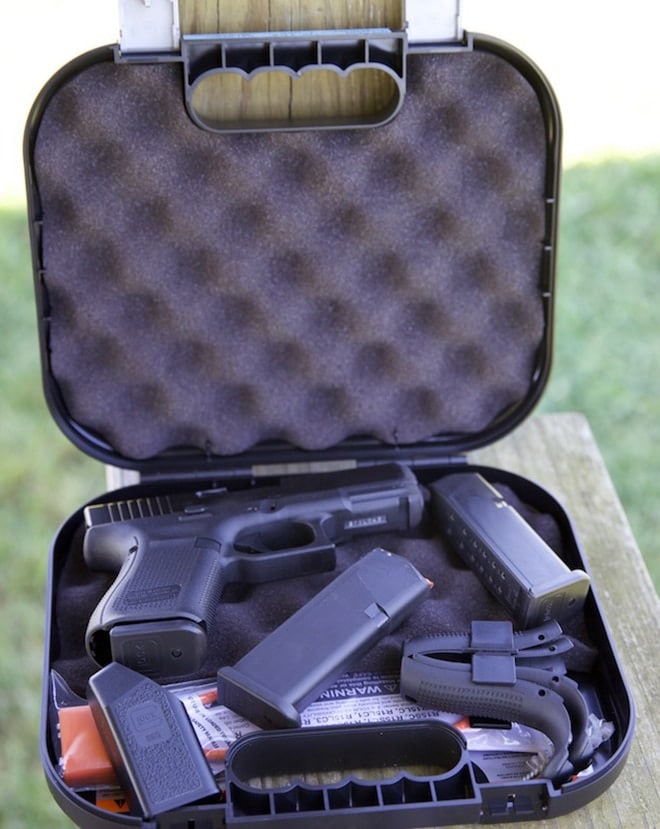 Glock loads the box with goodies to include interchangeable back straps and extra mags. (Photo: Jacki Billings)

Though she’s smooth, what really catches attention is the trigger. Hallelujah! Glock has finally realized how much shooters hate their past triggers. Notoriously sluggish and gritty, there’s a reason the Glock aftermarket accessory is going strong. Taking aim at the trigger tribulations, the gun maker has done extensive work on the assembly and mechanism to offer shooters a more pleasant pull. 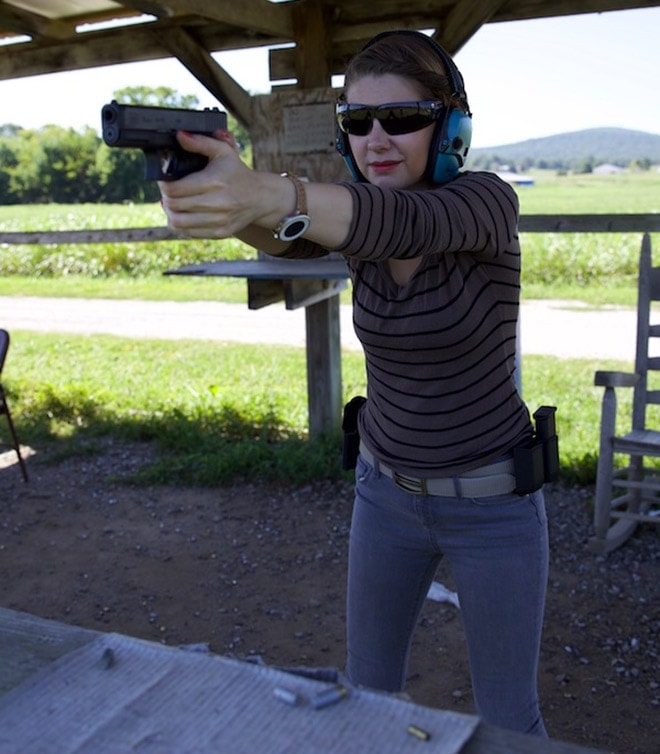 The gun performs as one would expect a Glock to – flawlessly with no issues. (Photo: Jacki Billings)

Reliability is what you’ve come to expect from the workhorse that is the Glock brand. The G19 performed flawlessly through boxes of ammunition, including Federal Premium’s newest Train + Protect. 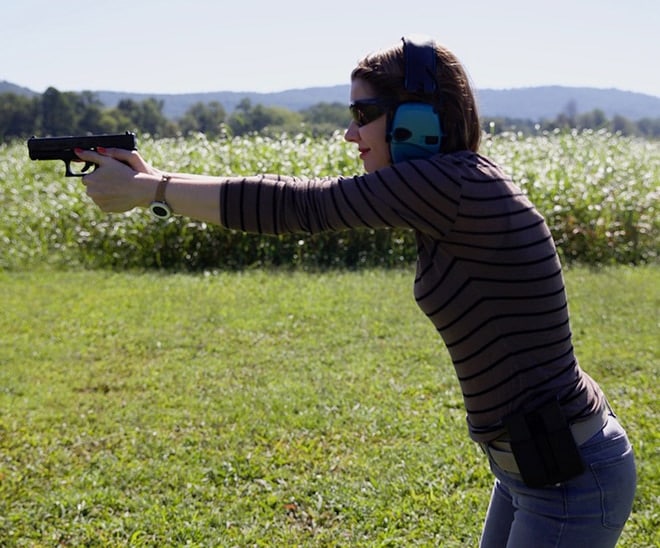 My only area of contention with the G19 was the… you guessed it… sights. As usual, I was less than impressed with the white, dovetail sights which are obnoxiously hard to see in low-light shooting and, in my case, seemed to have me shooting hard left. Sights are an easy fix, though, thanks to the aftermarket industry. 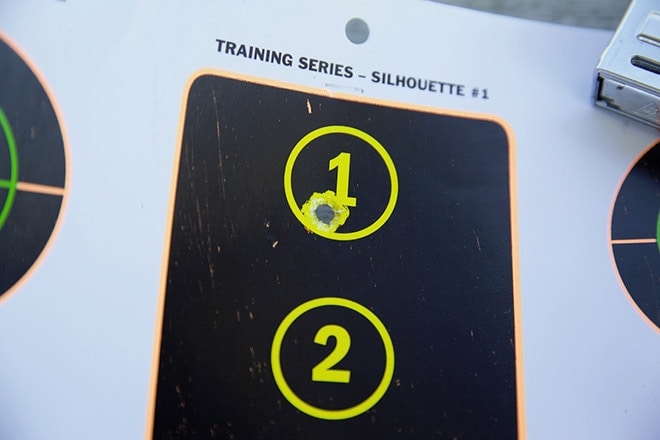 The sights had the author shooting a little left, but ultimately the gun performed as expected. (Photo: Jacki Billings)

Once I assessed the gun was preferring to shoot left and made adjustments to account for this, I had no other issues with performance. Shooting at 3, 5, 7, 10 and 15 yards I was hitting my Champion paper targets, steel targets and even some rogue water bottles that made their way downrange. 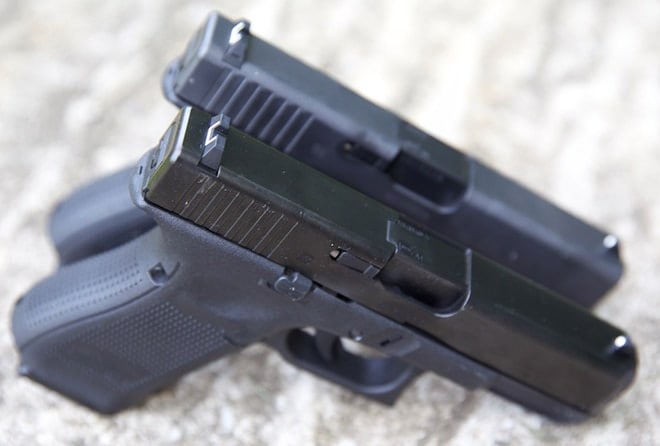 The latest G19 builds upon the success of the Gen. 4 tweaking attributes to produce a better carry gun. (Photo: Jacki Billings)

A note on holsters

The G19 is a popular carry gun so it’s only natural concealed carriers would want to know whether the new generation will work inside their current Gen. 4 rigs. In short, the answer is maybe. The added slide stop does change the fit in certain holsters. While some holster might just feel a tad tight, others will offer no positive engagement. Unfortunately, we suggest trying before buying. 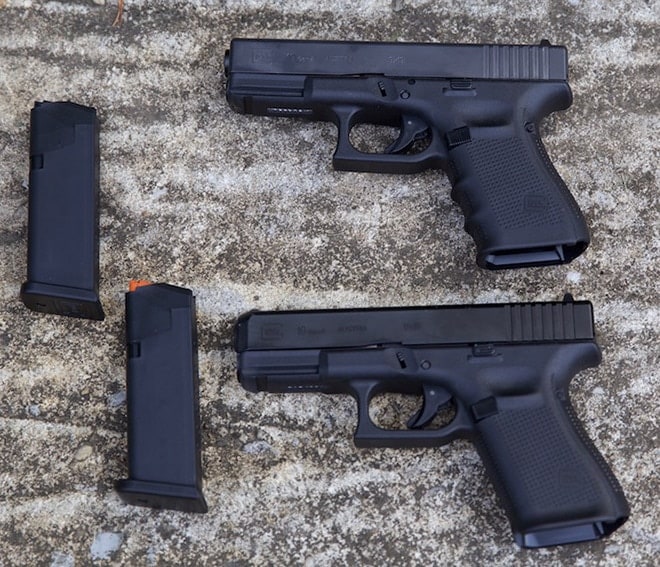 While they certainly haven’t reinvented the wheel, Glock has successfully navigated the waters of the next generation. The Gen. 5 G19 is a solid pistol platform that has enough new features to generate excitement without straying too far from what makes the Glock brand work.

Stay tuned to Guns.com as we continue to evaluate the Gen 5 G19.