Glock’s entry into the 9mm single stack universe came in the form of the Glock 43. Boasting similar features to its larger siblings, the G43 meshed Glock’s functionality with a slim profile offering shooters a compact, concealable package.

My interest with the G43 came at the National Rifle Association’s Annual Meeting in Nashville in 2015. Glock’s 43 announcement dropped right before NRAAM creating fervor among the Glock masses. Glock, of course, had them on hand at a press event and I gained my first opportunity with this 9mm. After firing just two mags, I knew it warranted a second look and a solid review.

And almost two years later, the G43 arrived at my FFL begging to be put through the wringer. 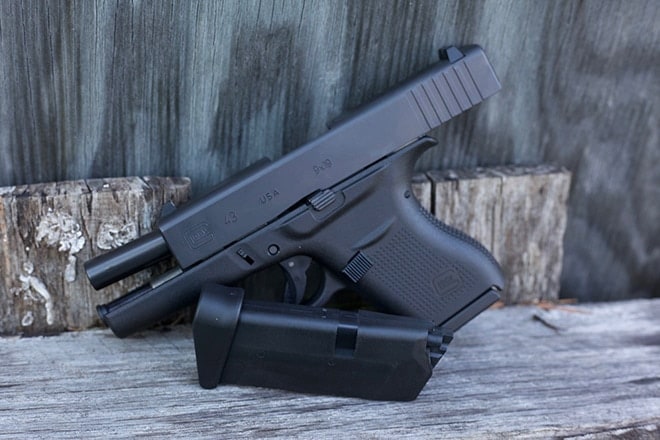 The Glock 43 is a single stack, 9mm design that features a 6+1 capacity. (Photo: Jacki Billings)

I lovingly refer to the G43 as my “mini-Glock.” Featuring much of the same aesthetics as its full-size compadres, the real difference in the G43 is its notably smaller size. Weighing just under 18 ounces unloaded, the G43 stands 4.45-inches tall with an overall length of 6.26-inches. Width hovers right at one inch while shooters get a 3.39-inch barrel.

All these number boil down to a simple fact – the G43 is compact and this is where she really shines. Slipping into a thigh rig, inside-the-waistband and even ankle holster with ease, the G43’s stature plays well if you need a faithful gun companion without the bulk or bulge of a full-size firearm. 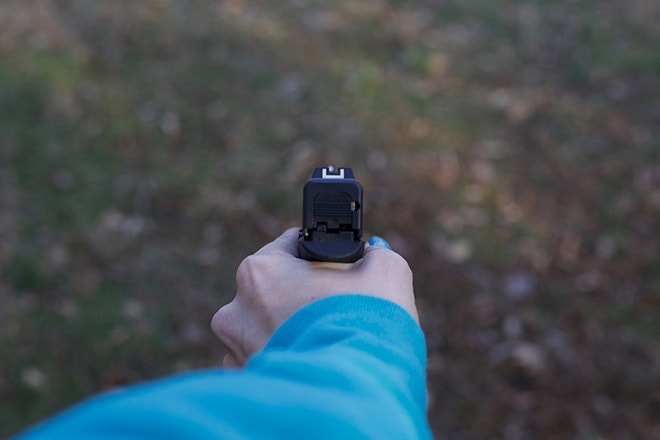 Factory sights from Glock leave a lot to be desired and prevent quick sighting in low-light conditions. (Photo: Jacki Billings)

The sights are standard Glock configuration with a front white dot and a rear u-shaped sight. I’ve never been a fan of the Glock standard, finding them difficult to quickly acquire in low-light conditions. I recommend swapping them out for something that is more luminescent in softer light.

While we’re on the topic of swapping parts out, let’s talk about that trigger. It’s no big secret that the Glock trigger isn’t loved by all and unfortunately the G43 makes no improvements on the old design. It’s no better than its predecessors but it’s also not any worse than any other stock Glock.

Perhaps because of this legacy, that squishy, uneven press is no deal breaker. Trigger kits are abundant and easy enough fix — but it’s a consideration if you’re looking for a turn-key gun. (That is unless you’re willing to make do with mush to save some bucks.) 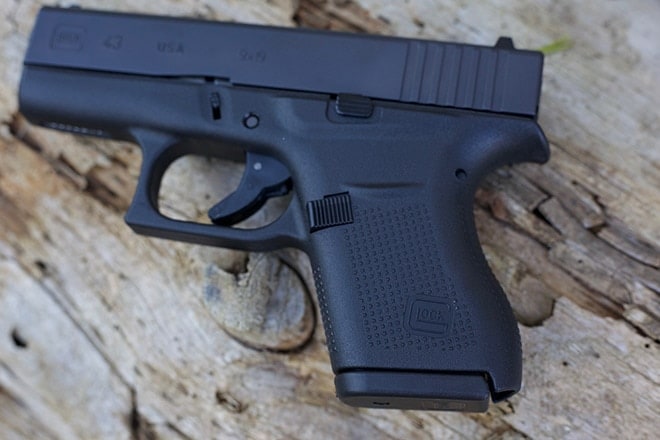 The magazine release on the model 43 is responsive, allowing for quick reloads. (Photo: Jacki Billings)

Where the Glock excels, besides the obvious, is the slide and magazine release. Serrations on the rear are perfect for gripping and ripping, while the slide itself moves freely on the rails. There’s no tugging and no frustration, which is helpful when working with students or shooters who struggle with slide technique or suffer from weaker hand muscles.

The mag release on the Glock also deserves a little attention as it is by far one of the best releases in the biz. An often overlooked feature, this one small button makes a world of difference when placed just perfectly and fine-tuned for smooth release. Glock understands that importance and outfitted the G43 with the perfect release.

The button rests in a sweet spot between the grip and trigger that allows shooters to depress with the thumb of the dominant hand without compromising shooting grip. It’s intuitive and efficient, two attributes that contribute to a faster reload. In addition, mags fly out with ease under subtle pressure. This allows shooters to focus attention on inserting a new mag, instead of wrestling with an empty one. 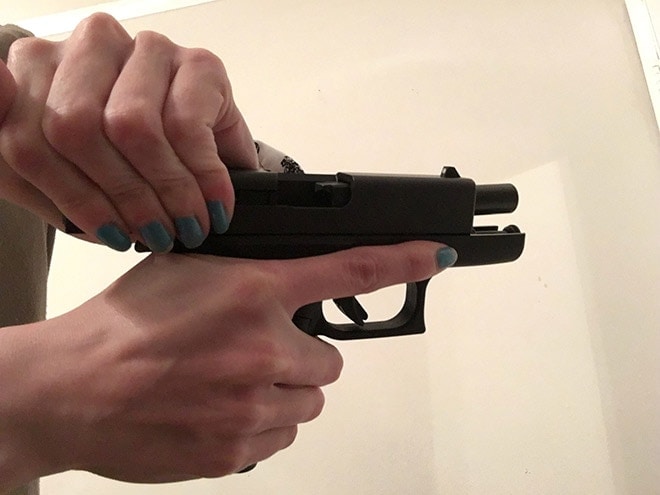 Glock’s slides are smooth as butter and the G43 is no different, gliding on its rails. (Photo: Jacki Billings)

Rounding out the notable features on the G43 is the grip texture. I found it to be less abrasive than Smith & Wesson’s Shield, but not as comfortable as Springfield’s XD line. The texture certainly gives sweaty hands some grip on the frame, but after a day of shooting my hands were a little red and raw. A rubber grip accessory over the top would have made my days at the range less painful.  Of course, this is not a necessity.

Though the G43 boasts a compact size that’s perfect for concealment, there’s one major trade-off for its petite figure. The underwhelming capacity of a mere 6+1 has many experts still questioning Glock’s thinking. With competitors packing at least seven rounds, if not more in their single-stack designs, it’s curious that Glock chose six as it’s definitive capacity. 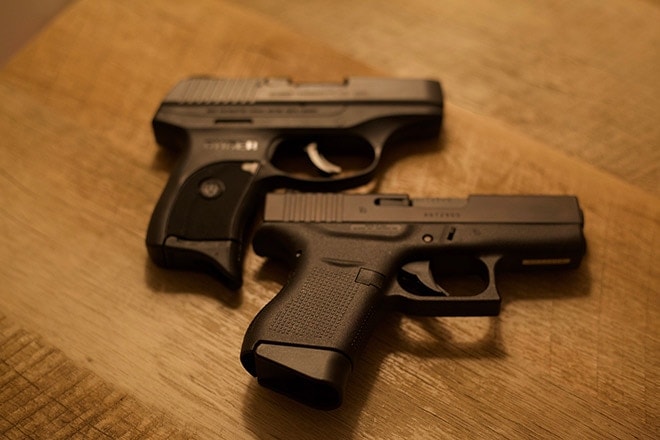 The Glock 43 next to Ruger’s LC9s. (Photo: Jacki Billings)

On the range, reloading is frequent and a majority of my time was spent loading bullets. While it’s always recommended to carry an extra magazine, the G43’s measly 6+1 demands it. Who wants to try to win a gunfight with only six rounds?

Despite this mind-boggling limitation, the G43 succeeded in eating up any ammo I offered it. It’s an admirable quality that has ensured Glock’s reign at the top. From Sig Sauer V-Crown to gritty cheap brass, the G43 didn’t slow down or stop on the range. If I’m stuck shooting just six shots at a time, at least I’m confident that I’m not going to be stopping to clear malfunctions.

Home on the range 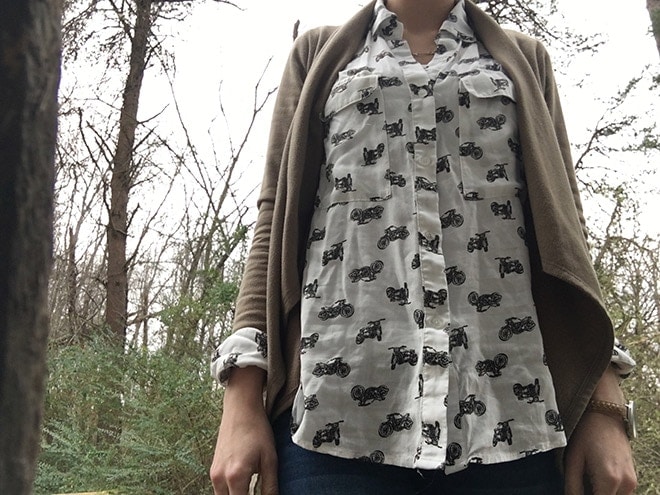 The 9mm is a snappy round and, packed into a compact frame such as the G43, shooters will feel the recoil. The slimmed down width of the grip doesn’t help disperse that jarring force, so wrists take that impact. Recoil isn’t as bad as the Ruger LC9s, which is unpleasant to shoot for long periods and, with proper grip technique, the recoil will be hardly noticeable for the average shooter. Gun enthusiasts suffering from arthritis or weaker wrists may find the G43 more difficult to manage than its larger sized brethren. 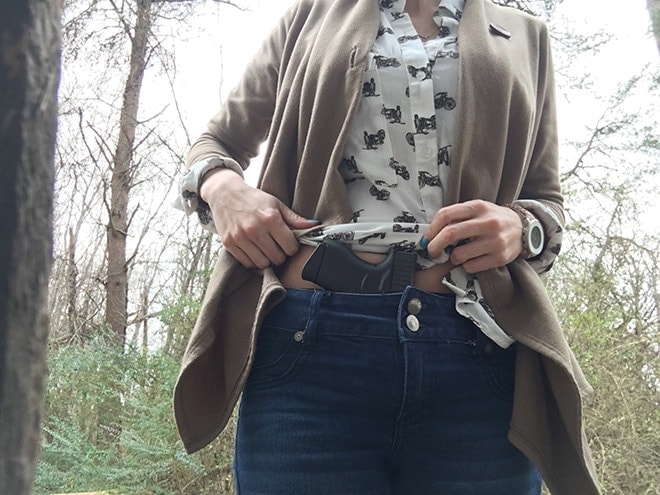 As demonstrated by its concealment in Crossbreed’s Modular Belly Band holster carried in the appendix position. (Photo: Jacki Billings)

Despite some pop, Glock’s 43 is a workhorse on the range. I put this gun through its paces, slow-firing and then rapid firing and not once did she let me down. Rain, shine, cool temperatures and hotter days, the G43 continued to spit fire despite conditions. She also suffered no failures or malfunctions.

As stated, I’m not a fan of Glock’s factory sights, but there is no doubt that they did the job, allowing me to I hit steel targets at 15 yards with little issue. Groups on paper were decent even after a full day of shooting on the range.

While I found the G43 to be extremely concealable and a decent option for those sporting smaller hands, it doesn’t negate the fact that there are other single-stack 9mm fish in the sea…and at a lower price. 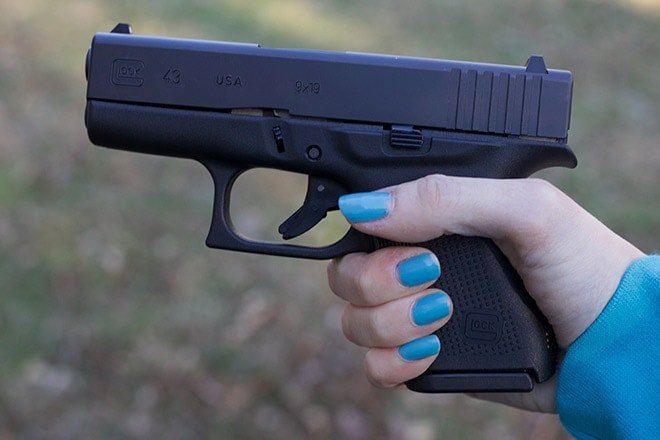 The G43 fit perfectly in the author’s smaller hands but may prove problematic for shooter’s with meatier paws. (Photo: Jacki Billings)

That being said, the 43 is a Glock and that name carries an expectation (and rightly so). If you’re looking for a gun that just works, Glock is it — reliable and functional on the range, it’s a pleasure to own and use simply because it’s so efficient. That said, any shooter in the market for an ultra-compact Glock in 9mm to add to their arsenal will find the 43 fits the bill perfectly.