We here all watched a little of Sons of Guns, we’re good people, we didn’t know how painful it was going to be… There was one episode, Master Key, where the fellows at Red Jacket hot-glued a sawed-off, stockless Saiga 12 to an AR rifle (and charged eight grand or somesuch to do so).  What they made there was a semi-automatic version of the very popular sawed-off, stockless Remington mounted to a rifle for breaching doors (or people).

The problem with that is the fact that it’s usually done with a Remington 870, a pump shotgun, with an integrated three-shot magazine; the KAC Masterkey.

The problem with Saigas is that they’re not military or police hardware, at least, not so much in the States.  C-More Systems met the issue with a quintessentially American solution: the M26, manufactured by the Vertu Corporation.

The M26 is an AR-styled shotgun with a detachable five- or ten-round magazine, eight-inch barrel, and it can be used with AR pistol grips and buttstocks as either a pistol or short-barreled shotgun, in addition to its use as an underslung Masterkey alternative.

It is still pump-action, but the charging handle is much closer to the shooter and makes operating the shotgun much easier in it’s underslung configuration.  Pump-action was chosen for simplicity and more importantly, weight.  Every ounce less shotgun means another ounce ammunition.

On it’s own, recoil is light due to its straight bore, and with the mass of a complete rifle behind it, negligent. 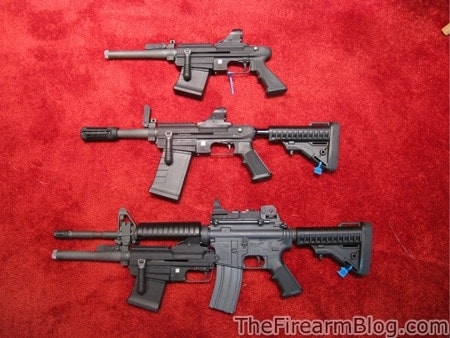 Clearly this has proven successful, as the U.S. Army has just placed an order with C-More Systems for 2,500 more M26s, (with a pricetag at $5.5M, or $2,200/shotgun) more than doubling the 1,900 already in use in Afghanistan and Iraq.  If its service record wasn’t enough, it’s the Army’s most-tested shotgun, with more than 80,000 rounds fired through one that had also been baked at 160 degrees and frozen to 50 below zero.

The M26 can be fed any cartridge designed for 12-gauge shotguns, from buckshot and slugs to more creative ammunition, like teargas canisters, less-than-lethal rubber shot, or even Taser shells as needed.

That, plus its light weight makes it a much more appealing weapon than any other rifle-mounted shotgun.

Still, it’s hard to see something that cool and not want one yourself.  While it may be pure speculation or a patent lie, there is a rumor floating around that C-More is developing a civilian version with an 18″ barrel. 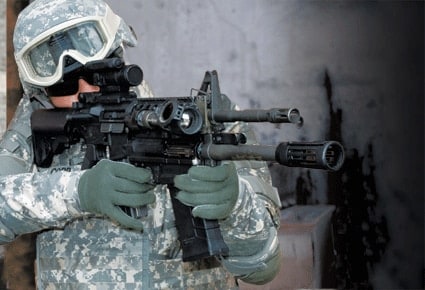 Civilian shooters notwithstanding, this is a very clever tool for not just the military but law enforcement, too.  Here’s to the hope that C-More gets cranking on a non-military version for use within domestic shores.