The Guns of the Generals

The everyday a soldier gets handed a rifle or in the days of yore, a musket, and though that gun is his, that soldier is often the first to admit, “there are many like it” which is to say it’s drab, mass produced and functional. But what about the commanders? Well, it should come as no surprise that throughout military history, generals have received quite the different treatment when it came to their side arms. 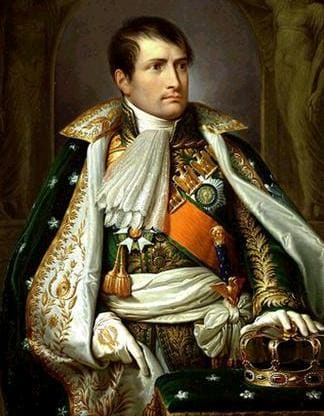 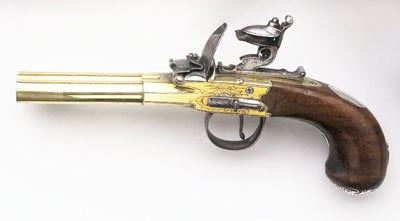 Napoleon Bonaparte carried a flintlock traveling pistol that he had made by the French gunsmith Jean-Baptiste Gribeauval of St. Etienne in 1806. This ornate pistol was carried in Napoleon’s overcoat and was a symbol of the guns carried by the elite and upper class (i.e. the only people who could afford them).  In the years following the French Revolution, this made a lot of political sense after the fall of the Monarchy but doesn’t really seem in the spirit of the revolution if you ask us. 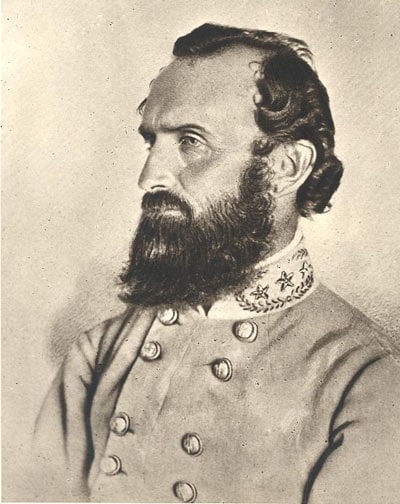 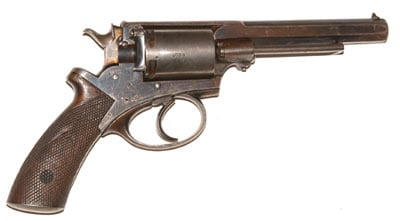 As the American Civil War continued to rage on, officer sidearms became less ornate and more practical as materials dwindled and leaders found themselves increasingly in harms way. Single shot pistols gave way to revolvers and on both sides of the conflict those in charge did well to arm themselves with them. Stonewall Jackson carried a Beaumont-Adams revolver. 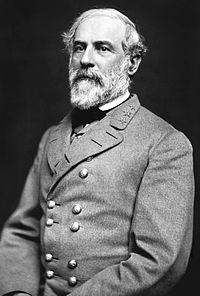 The Confederate general carried an 1851 Colt Navy and the gun almost immediately made the “commentaries” (i.e. print news) after the war as an object of public fascination. According to Flayderman’s Guide To Antique American Firearms, when the gun was shot in 1870 after the General’s death, every chamber fired as was, last loaded during the middle of the War seven years prior. 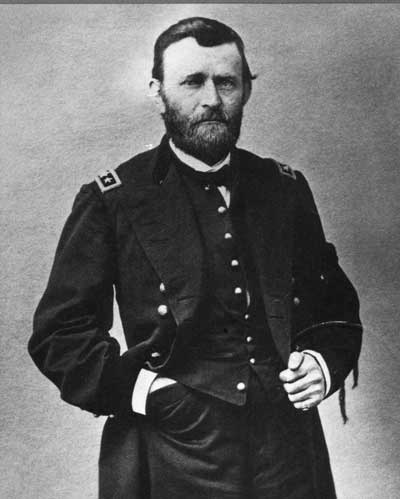 Also favored a .36 caliber Colt Navy, though the Union infantry, cavalry, and artillery favored the 1860 Colt Army—another black powder revolver only chambered for .44 caliber cap & ball loads.  With a rear sight notched out of the gun’s hammer, skilled revolver shooters could hit targets accurately up to 200 yards. 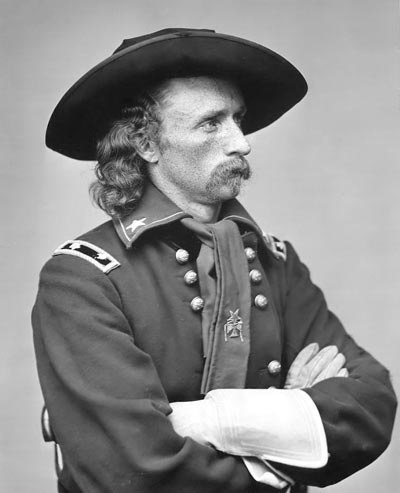 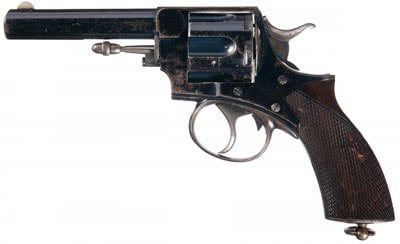 After the Civil War came the Indian Wars and on the fateful day that General George Custer met with Crazy Horse at the Battle of Little Big Horn, he was carrying a Webley Royal Irish Constabulary revolver. Custer had been given a pair of the guns by British Lord Berkeley Paget in 1869 after hosting a buffalo hunt. One of the revolvers was given to Custer’s brother Tom. The other was most likely carried off as a spoil of war after the long-haired General’s demise. 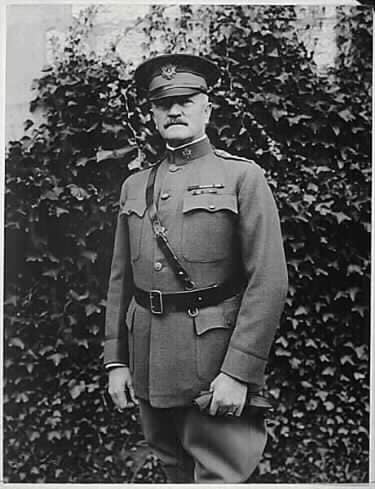 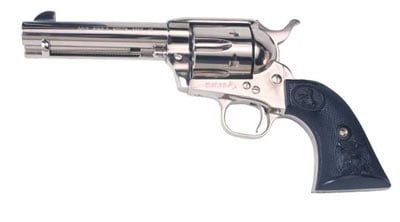 When the Spanish-American War broke out in 1898, new weapons abounded like the Colt 1889 Revolver, but, as we find is often the case even in modern military history, the old tried and true sidearms still remained favorites.

Prior to his rise to General, a young Lieutenant named John “Black Jack” Pershing carried a 7 ½ inch barreled Colt Single Action Army revolver.  It was on him when he led the 10th Cavalry of Buffalo Soldiers alongside Teddy Roosevelt and his Rough Riders to take San Juan Hill in one of the most hard won and decisive battles of that conflict. 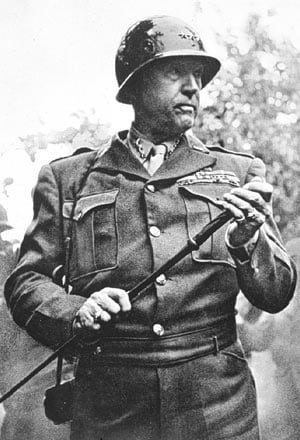 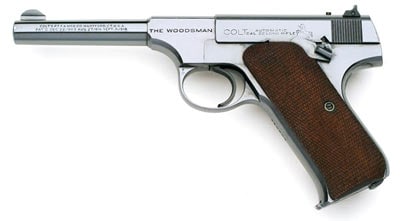 With the twentieth century brought less emphasis on military generals to carry sidearms as they were less likely to be seen on the battlefield.  As you can imagine, this didn’t stop them.

Perhaps the most well known was George S. Patton who carried a variety of handguns, including his Colt Single Action Army, a Smith & Wesson Registered Magnum and even a Colt Woodsman .22 pistol and it was one of those revolvers that prompted a reporter to question him about “pearl handles”.

Patton angrily corrected the journalist and stated that only “A New Orleans pimp would carry a pearl handled gun.” Patton’s revolvers were of course adorned with ivory.

Patton’s revolvers were also not just for show; two notches in the grips of his .45 Colt indicated the two confirmed kills he scored with it during the 1916 Punitive Expedition into Mexico where he shot two Mexican bandits dead. General Hugh Johnson (who shared a tent with Patton on the hunt for Pancho Villa) recalled later how he would watch Patton practicing his trigger pull with his Colt for hours. 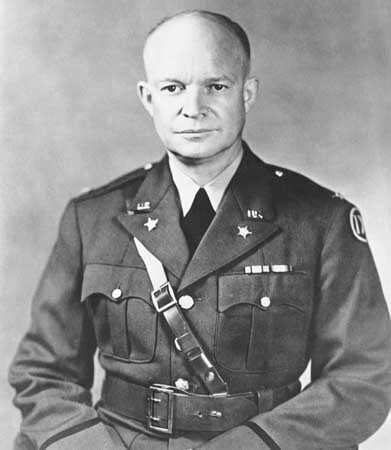 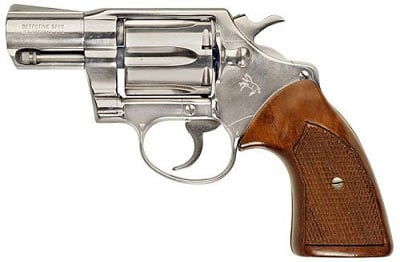 Unlike General Patton, Dwight Eisenhower preferred a more subtle approach.  He carried a Colt Detective Special.  When he retired, he returned the gun back to the Army. 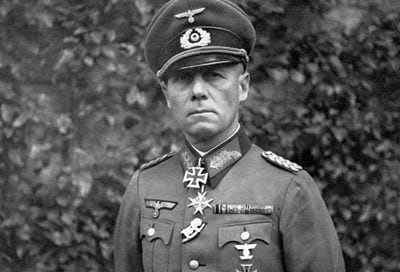 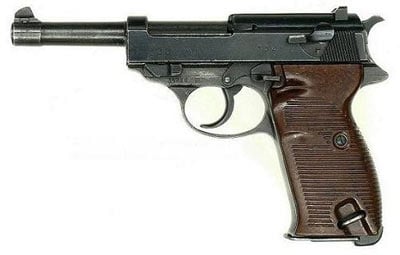 Generals on the other side of the fence also carried some sidearms worth noting.  Nazi general Erwin Rommel was known to carry a simple Luger or Walther P-38 in his holster.

Probably the most unusual thing seen from the Axis powers was the head of the Luftwaffe, Hermann Goering carrying a 4-inch barreled Smith & Wesson Military & Police revolver.  This gun currently resides at West Point.

After World War II generals have been seen less and less carrying a sidearm of any kind. Now that wars are led from great distances away there is simply no need for them and, perhaps just “the times” have kept handguns away from hips of our top brass. But who knows?  Maybe someday we will see another American General packing an ivory handled pistol, even if only for tradition’s sake.