The Colt 1911 had seen many modifications over the past 100+ years, but one of the most interesting was by a quiet Texas gunsmith by the name of Hyman Lebman.

His customers included the infamous gangsters John Dillinger and Baby Face Nelson, though this was unknown to him at the time, while his ingenious revisions to the classic handgun were equally dynamic.

Who was Hyman Lebman

Mr. Hyman Saul Lebman (who is also referred to in some documentation as Lehman) was a San Antonio, Texas saddle maker and gunsmith who specialized in custom leatherwork and firearms for Texas sportsmen, oilmen and cattle wranglers for more than fifty years. One day in 1933, he met a pair of otherwise charming young men who were in need of some effective firepower.

They portrayed themselves as new money Texas oilmen and gave Mr. Lebman no evidence to the contrary. What the gunsmith did not know was that one of them was a man born Lester M Gillis, but infamous later as “Baby Face Nelson” and the other one John Herbert Dillinger. Both were master outlaws and desperados who raced to the top of the FBI’s Most Wanted List. The two even visited the Lebman home and ate dinner with his family.

Lebman started with the standard .45 ACP caliber Colt M1911A1 semi-automatic pistol as used by the US military in World War 1 and made it into something quite different—he modified the action and trigger group to allow for full-automatic fire. The firearm was not select-fire but full auto only with a cyclic rate of 1000-rounds per minute. To help control this little dragon’s flame he added a sev 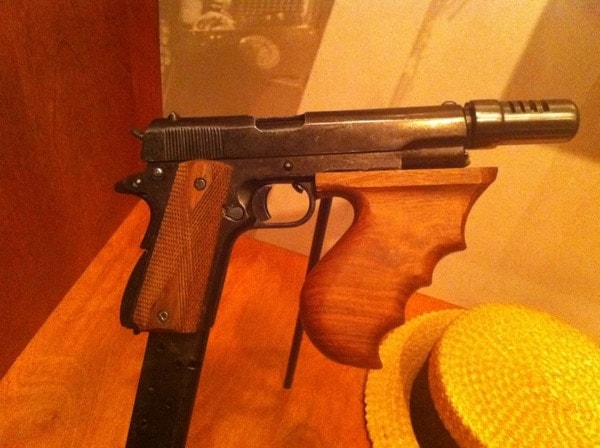 en-ported extended compensator to the muzzle that forced the barrel down as it fired.

A Thompson 1928 style finger-grooved fore grip was added just forward of the trigger guard on the bottom of the frame to allow both hands to be used to steady the weapon. With its standard 7-round magazine capable of being exhausted in just the blink of an eye, an extended magazine was fitted that extended about nine inches from the handgrip. Some of these weapons were upgraded in caliber to .38 Super Automatic. The round, invented in 1929, was similar in size to the .45ACP yet pushed a smaller 130-grain bullet at a blistering 1,280 ft/s. The 45ACP versions used an 18-round extended magazine, while the .38 Super used a 22-round version.

Five guns were made and sold to Nelson, who Lebman knew under the alias James Williams.

The pistols in action

Nelson and Dillinger both used and abused their Lebman room-brooms. The gang at the 1934 New Bohemia Lodge in Wisconsin used one weapon, a .38 Super 1911 S /N 14130 in the shootout. A second 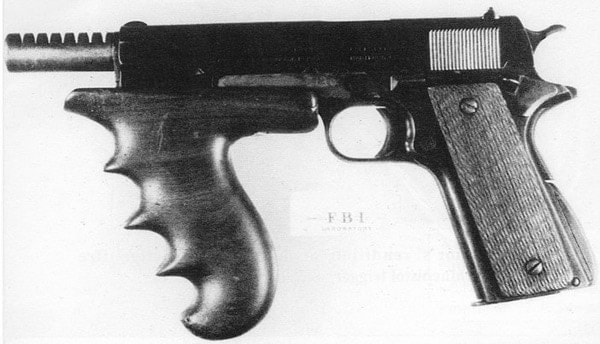 Once the New Bohemia gun had been recovered, the FBI traced the serial numbers through Colt directly to Lebman who soon found himself in hot water. After intensive scrutiny and an investigation, he was charged with violations of the National Firearms Act (NFA) of 1934 and the Texas State Machine Gun Law. On August 1935, he was sentenced to five years in the Texas State Penitentiary but the conviction reversed on appeal because the District Judge erred.  A retrial ended in a hung jury and Lebman was released.

Lebman and his legacy today

Today, Lebman and his guns are all but forgotten. One, the weapon recovered from his shop, has been in the FBI’s custody since 1943. The others are in various museums and private collections.  Lebman co 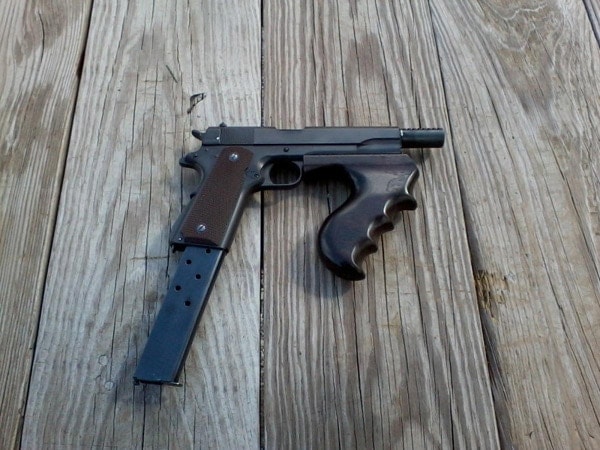 ntinued his gunsmith work, even providing expertise to the Monarch Gun Company in California until the 1970s when he retired due to Alzheimer’s. He died in 1990, outliving both Nelson and Dillinger by more than half a century.

His son, Marvin, is a retired lawyer, who in a recent article for My San Antonio said his father hadn’t done anything but sell guns to men in nice suits and hats.

“This was an open business, that had doors that were open. And we were a half a block south of City Hall, half a block north of the police department. Across the street from the county sheriff’s office. We did more work with policemen than we did with anybody else.”