I wrote an article not long ago about AR-15 pistols.  I’ve always been fascinated by these weapons, not fascinated enough that I want one, but I still like to look.  I think I can boil it down to this.  I understand the what of the AR-15 pistol, but I don’t really get the why.

And then I went to an auction last weekend and I saw an Iver Johnson Enforcer.  And now I think I understand the why.

The Enforcer is one of the most interesting crossbreeds I have ever seen.  As a product of the 1970s, the Enforcer (and all of the odd guns like it) were both modern and antiquated, at the same time.

The gun is built from spare parts, leftover pieces from contract M1 Carbines.  As our involvement in Vietnam was waning, and the issues with the M16 were getting ironed out, the military moved away from the heavy M14, and the older M1.  Companies in the US found themselves with manufactured parts that had not been assembled into rifles.  And many companies had invested heavily in the tooling needed to produce these guns.  So it is understandable that these companies would look for ways use these parts and machines.

But it wasn’t enough to simply use them.  By the mid 1970s, the M1 Carbine was a hard sell.  The gun was still made of wood and steel, in an era increasingly dominated by aluminum and plastic (and some steel, too).

But they found the design they were looking for, something old that looked new.  The result is a shorter carbine styled pistol.  It uses the receiver and barrel of the M1 Carbine, and part if the gun’s stock.  The barrel is chopped down to nine inches.  The whole gun comes in near 20 inches.  The stock is removed, and (as it was with many of the paratrooper models of the M1 Carbine in WWII) reshaped into a pistol grip, and reattached.

It takes any of the M1 Carbine magazines, many of which offer 30 round capacity.  The sight from the M1 Carbine, a blade front sight protected by two steel wings, is replaced by a fat front blade that is part of a cap at the front of the perforated steel hand-guard. 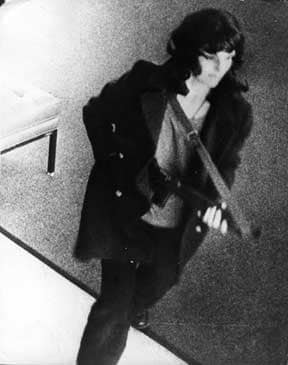 The M1 Carbine exists in many incarnations.  There is the carbine itself, the paratrooper carbine (basically defined by a side-folding wire stock), and then the Enforcer type weapon.  There are internet rumors that suggest tunnel rats in Vietnam cut the barrels off of M1 Carbines so they could have more firepower underground.

That may be where the idea came from, but the pistol got more attention after the war.  Patty Hearst was photographed in a 1974 bank robbery holding a Universal Firearms carbine with a chopped barrel (though the front sight seems to have been moved back on the barrel).

This was 1974, before Iver Johnson began branding the Enforcer, though they had been made by Plainfield and American Military Arms Company (both of which would eventually be owned by Iver Johnson).

Hearst’s gun had many of the features of the Enforcer, but it had an under-folding stock, and it appears that the grip is made out of plastic.

It is easy to see the appeal of a short barreled M1.  And it is interesting to see how the various incarnations accommodate legal concerns.  The Enforcer is legal as a pistol.  It is a short-barreled rifle if it has a stock, like the modified UF used by Hearst in her robbery.  It would also not be legal to attach a forward hand grip. But that isn’t really an issue, as the magazine provides an excellent hand hold. 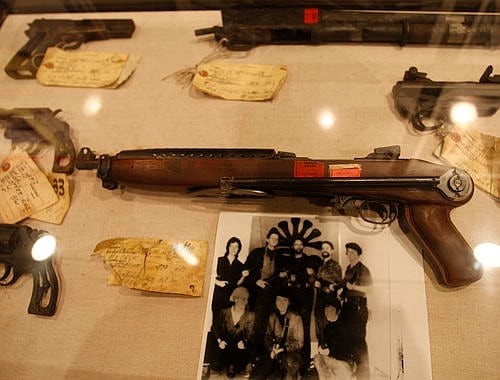 And I wouldn’t be surprised to see more M1 Carbines, and pistols.  They are great guns, and really useful.  As talk escalates about assault rifle bans, the M1 might fly under the radar.  And Hornady’s new Critical Defense in .30 caliber will only make old M1 a more viable option.

I couldn’t afford the Enforcer that was sold at the recent auction.  But I’ll find one, sooner or later.

If you are looking for information on M1 Carbines, check out m1carbinesinc.com.  Can’t be beat.