Flare guns, or signal launchers, have been around for ages.  Their original and still-intended use is that of distress signaling, generally in a marine environment.  The most common type of early signal pistols were developed by and named for American Naval Officer Edward Wilson Very (1847-1910).  The Very flare “gun” gained popularity around its creation in 1877 and was adopted by the Navy around 1882 for use with both distress and communications.  The gun’s use became worldwide before the start of World War I, where it saw regular service. 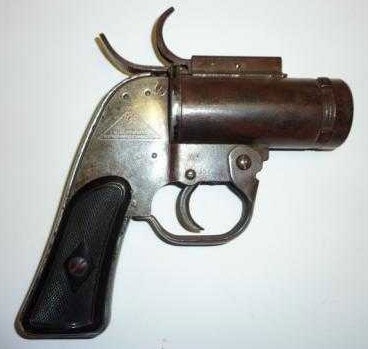 An all metal constructed flare gun.

While their use has never been that of an actual weapon, difficult circumstances may dictate using a weapon of opportunity and sometimes (sometimes) it just happens to be a flare gun.

In WWI, it was rumored that a German plane was destroyed on the ground when a Very pistol’s flare was fired into the craft.  Similarly, in the midst of World War II, a German pilot who mistakenly landed at an unfriendly airfield was taken into custody using a Very pistol, as the arresting officer did not have his sidearm at the time.

But probably the most famous flare gun reference comes from the English rock band Deep Purple’s song “Smoke on the Water,” which was written due to the use of a flare gun.

In 1971, while the band was recording in Montreaux, Switzerland, Frank Zappa and The Mothers of Invention were in the middle of their performance across the lake.  When an audience member fired a flare gun during the concert, the theatre caught fire and was destroyed.  Members of Deep Purple watched the smoke rolling over the waters of Lake Geneva.  If you listen closely to the lyrics, the story is there and even mentions use of the flare gun.

Turning a flare gun into a real, live pistol

Very pistols were a breech loading, single-shot, single-action hammered arm with a snubby barrel that fired signal flares, or lights.  In fact, the special colored flares fired from Very pistols were affectionately known as “Very lights.” The bores of the time were most often 1-inch in diameter. 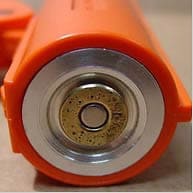 Fast-forward to today and the design of flare guns has not changed all that much. The artful Very pistols, whose solid construction was not unlike that of guns that fired live ammunition, have largely given way to commercial plastic/polymer launchers with smaller bore diameters.

If you pay much attention to firearms media, you’ve no doubt seen ads for what are commonly called “adapters” or “sub-caliber devices.” These are smallish inserts that can be dropped into the barrel and turn said signal device into any number of actual live ammo shooting calibers including .22 LR, .38 Special, .410, 12 gauge, and yes, .45 Long Colt.

An Internet search will turn up dozens of manufacturers of varying repute and hundreds of do-it-yourselfers (whose craftiness may or may not have led to subsequent emergency room visits). So when we talk about creating an actual weapon, we’d suggest leaving that to the professionals.  That’s why there are two makers I’d seriously consider—Kennesaw Cannon and GaugeMate.

Kennesaw Cannon – The Kennesaw Cannon company, most notable for selling mini-cannons, sells both .22 LR and .410/.45 sub caliber devices (SCD). The company markets its items for boaters, campers and hikers with the motto “don’t be caught defenseless.”

The key here is that Kennesaw’s devices fit solely inside Mil-surp type 26.5mm launchers, which naturally makes them incompatible with the bore diameter of most plastic-type flare guns.  The SCD itself is a rifled steel barrel encased in a lightweight adapter and weighing around 1.6 ounces.  It’s BATF approved as a stand-alone item because it is obviously not a firearm in-and-of itself. Kennesaw even includes the BATF letter with each purchase.

Like Kennesaw Cannon, GaugeMate also offers all the appropriate user warnings, information and a copy of the BATF letter.  GaugeMate’s disclaimer states, “12 gauge shotshell ammunition is not interchangeable with 12 gauge flares and not to be used within a flare gun.  Flare adapters are not meant to be used for single-use plastic flare guns. Doing so may cause fatal injury.”

All warnings aside, these inserts will fit into whatever launcher your little heart desires, so some common sense and caution will go a long way.

GaugeMate is also a fine company and makes tons of different adapters for actual firearms. For what its worth, I’ve used GaugeMate’s sub-gauge adapters in both 10 and 12 gauge shotguns with great success.

Milsurp Flare Gun – With the rage of these ammo-eating adapters rapidly growing, we’d be remiss not to examine the only guns truly meant to house them.  Unlike dropping by a big box store to purchase a plastic Orion launcher, buying most Mil-Surp flare guns these days is neither cheap nor easy.  A previous Guns.com article looks at the rise in value of collector-type Mil-surp flare guns.  Versions such as the Polish and German flare guns are still available, though prices have been rising over the years.

If you have in mind to own a flare gun that will really last and one that will handle these inserts with as much safety as possible, these are the type of arms you will need.  Most Mil-surp launchers are solidly made with tight lockup mechanisms that can handle increased firing pressures unlike their plastic counterparts.

Please, do not attempt to shoot live ammo out of plastic flare guns.  While it may work at least once, the risk cannot be worth any reward. Reputable brands are more worthwhile rather than the DIY’s.

Kennesaw’s Operations Manager Buddie Daniel said, “The only thing that I can’t stress enough, is that the 26.5mm flare pistol must be in good and sound working condition and the barrel must be fully latched before firing. This is no different than any firearms use.  If [the user is] using the many military surplus flare pistols on the market, they should not have problems.”

Orion Flare Launchers – Whether or not these adapters are made for MilSurp flare guns, Orion, the largest manufacturer and distributor of visual distress signals in the U.S, makes the most common and inexpensive launchers.  Perhaps the most readily available size, and the one I stash in my boat, is Orion’s 12-gauge launcher and signals.

Don’t get me wrong Orion is a fine company and it generates quality and trustworthy products.  However, Orion’s lockup systems are not made for the kinds of pressures and energies exerted by live ammunition.

Robert Defonte, Vice President of Sales and Marketing of Orion Safety Products, was upfront about this. He told Guns.com, “Orion does not now, nor in the past, condone the use of any type of shell, other than our aerial signals in our launcher.  We realize it is dangerous and unlawful to include this message on our packaging.”

In addition, Mr. Daniel over at Kennesaw echoed this message. “A person should never attempt to modify and use the Kennesaw Cannon Sub Caliber Device (SCD) in a 25mm flare gun or an inferior flare gun. The Olin/Orion 25mm flare pistols will not handle the energy of the cartridge ammunition. Our SCD as manufactured will not fit in the Olin/Orion flare guns.”

All warnings aside, some people will still (and have) used these inserts improperly in plastic flare launchers.  So, just how dangerous can that be?

The caveat: Possession and safety

If you want proof of what can happen, look no further than testing done by the Firearms Testing Branch of the BATF in 2006.  They fired both 12 gauge and .38 caliber ammo in four Orion flare guns—provided by Orion—and were fairly warned by Orion that this sort of unsanctioned test would likely result in “catastrophic failure of the flare launcher.”  One guess as to what happened. 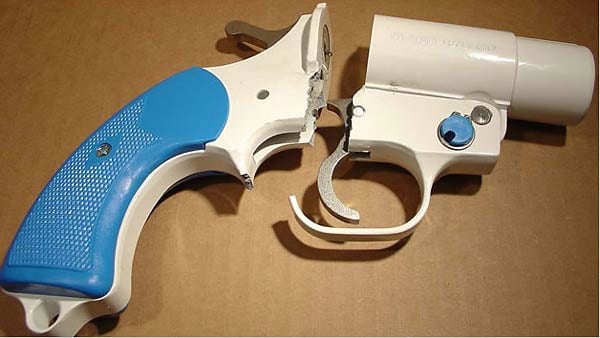 A broken Orion flare gun courtesy of the ATF.

The official FTB live fire testing “resulted in the eventual destruction of all four flare launchers and confirmed that the use of these adapters in conjunction with conventional ammunition is likely to result in a catastrophic failure of the flare launcher.”

It’s unclear how many rounds each took for the flare gun to be destroyed, but I’d venture to guess it wasn’t that many.  I don’t know about you, but I’d rather not be anywhere near a gun right before it ends up looking like that.  GaugeMate went so far as to link this test in the listing with their adapters.  To be fair to the legitimate manufacturers like Kennesaw who “ have test fired hundreds of standard factory cartridges without any failure,” the FTB not only used plastic launchers in their test, but also fabricated the inserts themselves, of aluminum, not unlike many do-it-yourselfers on Youtube.

Beyond the possibility of catastrophic failure when using these adapters in unsanctioned/unsafe launchers, there remains a pool of other legal ramifications in which to wade.  In conjunction with their testing, the FTB clearly states that “if these inserts are installed in a flare launcher or are possessed with a flare launcher they would be classified as an ‘Any Other Weapon,’ which is a firearm subject to the provisions of the National Firearms Act.” This classification naturally extends to transference, sales and possession by felons, among other legal issues, according to an ATF press release from 2006.  In fact, GaugeMate also links to this information on the sales page for its adapters.

One must also consider whether it’s legal to “conceal” this modified flare gun, say in your boat or camping gear without proper carry documentation.  Or whether non-rifled versions of these adapters would constitute a much-too-short shotgun, because I have yet to see anyone wielding an 18-inch barreled flare gun.

My other major concern is that if you keep the device in your flare gun—loaded or not—in an actual emergency which requires flare signaling, there will not likely be time to both remove the insert and find and load your signal flare. Boats just don’t sink that slowly or calmly.

The moral of the story

As with any firearm, safety is paramount.  Sure it’s tempting to create, say, a .38 caliber pistol for potentially less than $100. And it’s nice to know companies are looking out for us with warnings, tests and the like, but that’s no replacement for some good ol’ fashioned common sense.  All disclaimers aside, most folks can purchase a sturdy Milsurp flare gun and SCD and have quite the conversation piece of a weapon when used wisely both physically and legally.