It’s easy to understand the temptation to revive the classic P-08, an iconic Luger handgun, for a new generation. After all, the M1911 design has long been produced by a wide variety of manufacturers, at all kinds of price points and quality levels. Certainly, there must be a market for a new P-08, right?

Unfortunately, as a couple of manufacturers have discovered, the answer is “no, there isn’t.” But it certainly was worth a try and by doing so some magnificent reproductions were made, such as the Mitchell Arms P-08. 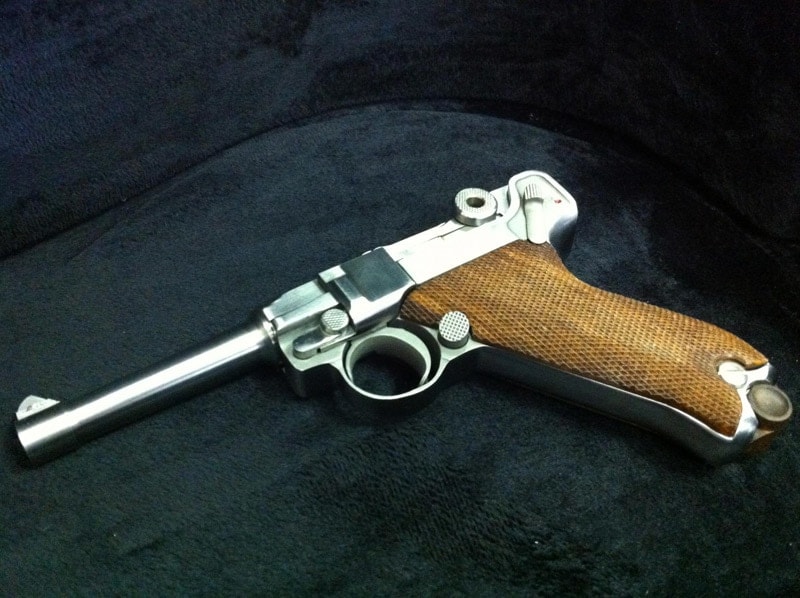 As you may have noticed the Mitchell Arms P-08 has a fabulous stainless steel construction and classy wooden grips (no plastic here). (Photo credit: The Outdoors Trader)

In the early 90s Mitchell Arms was the first to bring forth a new P-08 – an all-stainless steel one true to original designs. The company contracted a small Texas manufacturer by the name of Aimco to produce them. Although the guns were only made for about a decade, they can still be found used, a lot of which in good condition, if you hunt a bit. I recently had a chance to try one.

If you have any experience with an original WWII-era Luger the first thing you might notice is just how good of a reproduction the Mitchell Arms P-08 is, at least in terms of the appearance. The fit and finish is quite good and, on top of that, original magazines work fine in the Mitchell Arms version.

A magazine might seem like a fairly trivial thing to focus on, but in the case of the Luger, having a magazine that fits properly and has the right spring pressure is critically important. You see, the toggle-action design of the gun requires the correct balance between the main recoil spring and the magazine spring. If that balance is off, if one of the springs doesn’t have the right pressure, then the whole system won’t work properly, and there will be jams in the gun. The fact that the Mitchell Arms reproduction works with both original and new magazines says a lot. (Note: New magazines also work in original models!)

The experience of shooting the Mitchell Arms P-08 was just like shooting an original Luger in almost all regards. I can confidently say that because I shot the two back-to-back, with no time lag, so I could make an immediate comparison. It had the same dynamic to the recoil. 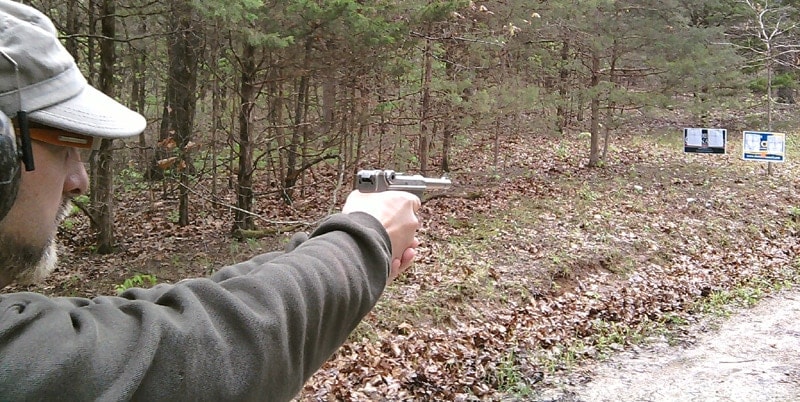 Some of the energy you feel does come straight back as in any modern slide-design gun, but there’s also some re-direction of the energy upward thanks to the way the articulated joint moves. And since it is at the back of the gun, it tends to change the dynamics of how the gun moves in your hand. There is less of a feeling of “muzzle-flip,” though your whole hand moves up a bit.

This made it easy to quickly re-acquire your target, and took some of the “snap” out of shooting 9mm parabellum rounds, which are a high-pressure round. I’m not recoil sensitive, but I could see how this design would appeal to someone who was.

Since the Mitchell Arms gun hadn’t been shot too much the trigger felt a bit different. It was stiffer than on the original Luger, as well as a bit rougher. Not bad in either case, but to be clear it just wasn’t as good as the 70-year-old gun, which had presumably been shot more. 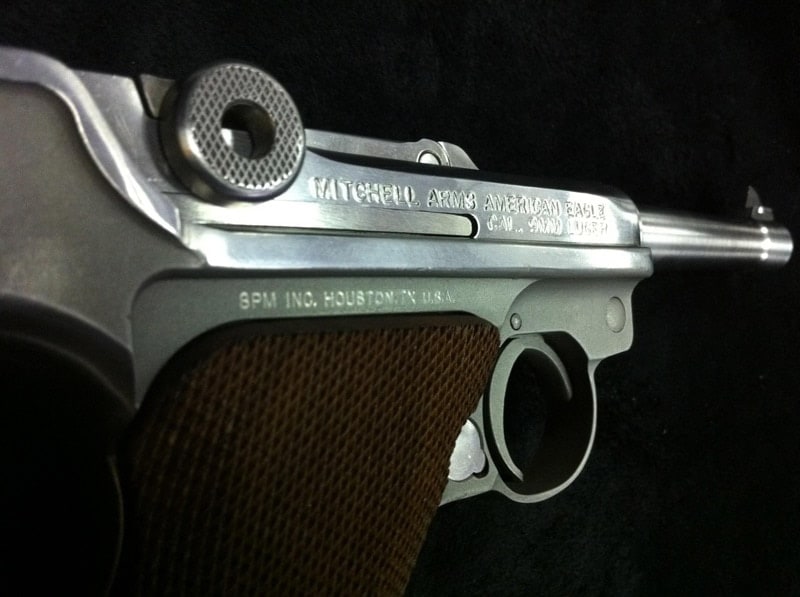 The Mitchel Arms P-08 is identical to the original in construction and feel. It is chambered in 9mm Parabellum, equipped with a 4-inch barrel and an 8-round magazine, and weighs around 30 ounces. (Photo credit: The Outdoors Trader)

As noted earlier, the fit and finish on the Mitchell Arms gun was quite good. The stainless was well finished, lightly brushed in that way that will hide small scratches. Everything fit together tightly, and the gun felt perfectly solid in the hand. Nice walnut grips that were more friendly to the hand than the original’s Bakelite plastic grips.

So, it was a good gun. Well made and attractive. Most of the reports I have read about these guns indicates that they also age pretty well, though some owners have reported that some batches of the guns had some problems with the stainless steel not being hard enough, which caused some galling of moving parts.

So why wasn’t it a success?

Well, for the same reason that the original Luger was discontinued, in favor of the P-38/P-1: cost. Even using modern manufacturing technologies, the Luger costs more to produce. The Mitchell Arms P-08 sold for about $600 initially, but that price raised over time. If you go looking for one now, you can find a good used/LNIB one for something on the order of about $1,000.

In both cases, that’s more than you’d spend for an original Luger. Granted, you’re getting a gun that is new (or almost so) versus one that’s somewhere between 60 to 100 years old. But you’re also just getting another gun, as opposed to one with some real history tied to it. Why not just get a run-of-the-mill original as a ‘shooter’ and save yourself several hundred bucks?

Seems that most people asked themselves that very question. And the answer wasn’t one that Mitchell Arms liked.