Ever had one of those days when you are hunting for squirrel with a .22 and then run across a wild hog or coyote that is just begging to be taken off the food chain and wished you brought your shotgun instead? Well that problem is a non-issue for the lucky legions of Savage Model 24 owners. This groovy little game getter came in a variety of flavors though with one unifying feature—they were a rifle and a shotgun in the same platform.

The Savage 24 actually has a common ancestor from J. Stevens & Co of Chicopee Falls, Massachusetts. 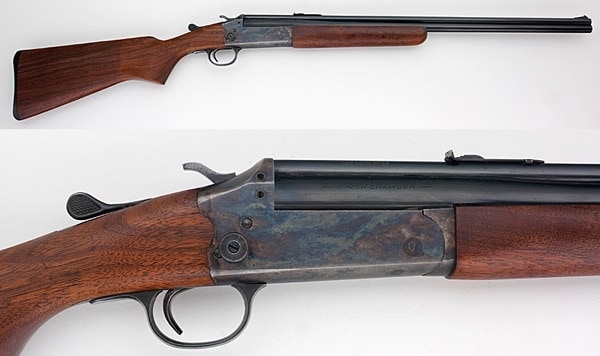 This firm came about with a combination gun with a smoothbore .410 shotgun barrel married under a .22 rimfire rifle barrel with a single sight, hammer, and trigger. Stevens put the handy little marvel into production in 1938 with the appropriate moniker of the Model 22-410. The Army Air force ordered 15,000 of them for use as aircrew survival rifles with a Tenite (an early thermoplastic) stock. In 1950, the gun went out of production with Stevens.

Savage had been (and still is) the parent company of Stevens since 1920, making it easy to see the import of the Savage 24’s concept.

Design of the Savage 24 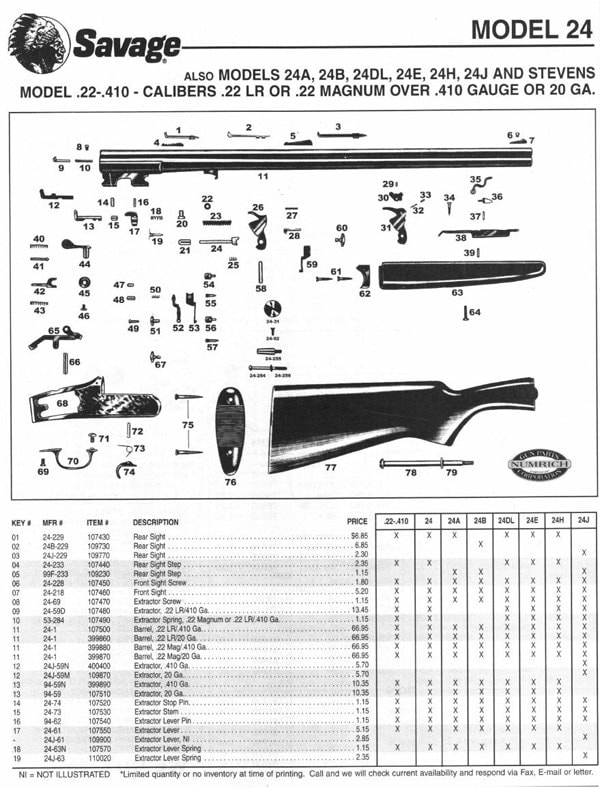 The same year the Stevens 22-410 went out of production, the Savage 24 was introduced. Taking the Stevens combo gun, Savage retained the concept of a standing breech, break open rifle over shotgun combination gun, which utilized a rebounding hammer and rear pushing extractors. The 24-inch .22 barrel would accept S, L and LR rimfire rounds and the same length .410 would take up to 3″shells and had a full choke. The double gun was a handy 41-inches overall and 7-pounds flat.

Savage over time improved the on-frame barrel selector and moved it to the hammer to make it more reliable, dropped the tenite moldings in favor of uncheckered walnut, and added other chamberings. The chamberings themselves produced a myriad of options including rifle calibers in not only 22 S/L/LR, but also 22 WMR, .30-.30, .357 Magnum, .22 Hornet, .222 Remington, .223, and .357 Max. Shotgun tubes included .410, 20-guage, and the ever-popular 12-gauge.

But beyond these simple offerings, in the 60-years of production from 1950-2010, the Model 24 came in more flavors than Baskin Robins ice cream. There was a high-end version, the 24V, with case hardened steel, factory scope dovetail grooves, and high finished walnut stocks with deep grains. Gimmicks came and went including the Camper’s Companion with 20-inch barrels and a 5.75-pound weight, the camouflage Rynite-stocked 24F Turkey gun that included three interchangeable choke tubes and the 24F Survival model with a built-in compass and onboard storage compartment for supplies. A handy added feature on some models included a compartment under the butt plate that securely held a handful of extra rounds for both barrels. 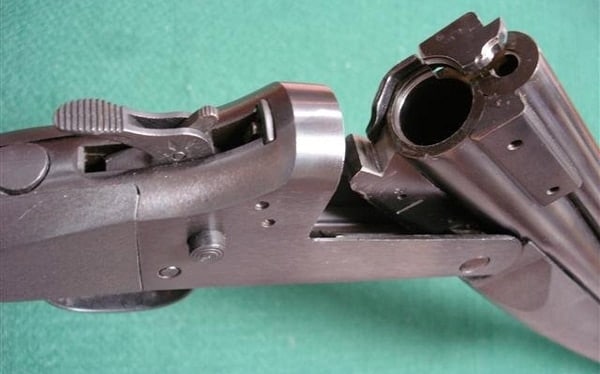 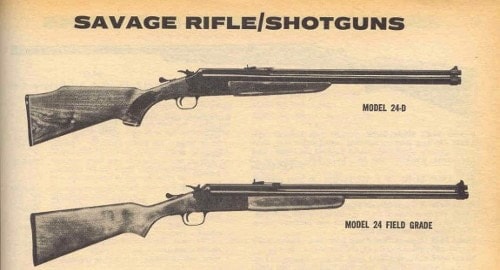 following. They allow fast interchange between calibers in a single platform for a decent and attainable price. Well-used but still functional rifles tend to go in the $200-$300 price range with higher calibers being on the more expensive end. Nicely preserved versions of the 24V that closely approach a field grade rifle in quality go for twice that amount. These combos are a great choice for survival guns or for everyday use around camp. Simply designed and with only a few moving parts to break, they are ideal for low maintenance storage as a truck gun.

Incidentally, Savage just introduced the Model 42, which is a dead ringer for the 24 except using much more polymer along with a few other improvements. What can I say, the more things change..the more they stay the same.