Say Hell to 'My (little) Friend': The knuckle duster 'ring' gun of the Catskills (VIDEO)

Back in the late 19th century, brass knuckles and small pocket revolvers were popular for personal defense.

One Catskills gun maker decided to combine these two concepts in the form of a compact protection tool that could be used as both. His name was James Reid, and his little knuckleduster revolvers were simply referred to as the “My Friend” series. 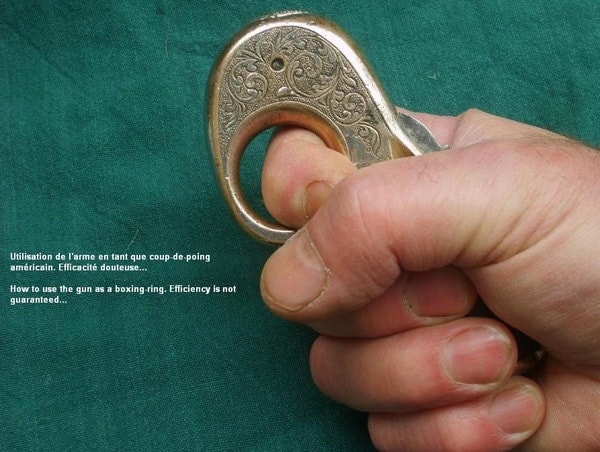 ‘My Friend’ in the held in recommended knuckle duster position. Huh…

The 1860s were a dangerous time and, in a vastly more rural America, police forces were few and far between.

Towns were usually well patrolled, but if you traveled often, the odds of coming in contact with the criminal element were much higher than running into a member of law enforcement community, which was officially non-existent on a national level and often ‘impromptu’ on the local.

This led to individuals carrying small impact weapons such as blackjacks and brass knuckles or small guns like derringers that could fit in a vest pocket, hidden until needed.  Inevitably, demand fueled innovation in the concealed weapons market, often in surprising ways.

James Reid, an Irish immigrant who learned gunsmithing in Scotland, heard this call and gave the people what they wanted: a compact little revolver that could also be used as an impact weapon. 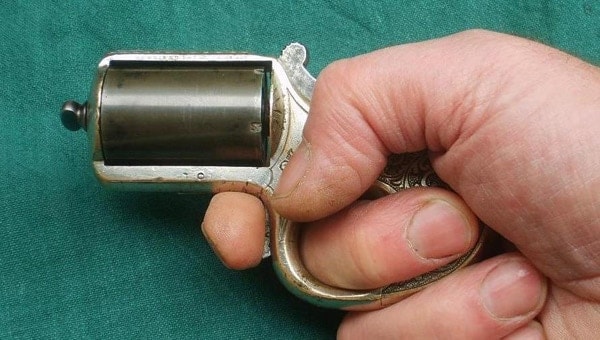 ‘My Friend’ held as pistol.

Reid was no stranger to firearms. Immigrating to the states in 1857 at age 30, he worked mainly on small revolver designs.

During the Civil War, he helped design and build guns for W.W. Marston and W. Irving Co. in New York City before striking out to the hills to form his own shop in Catskill. It was there on the day after Christmas in 1865 that he was granted a patent on his new device, he referred to in writing as ‘My Friend’. 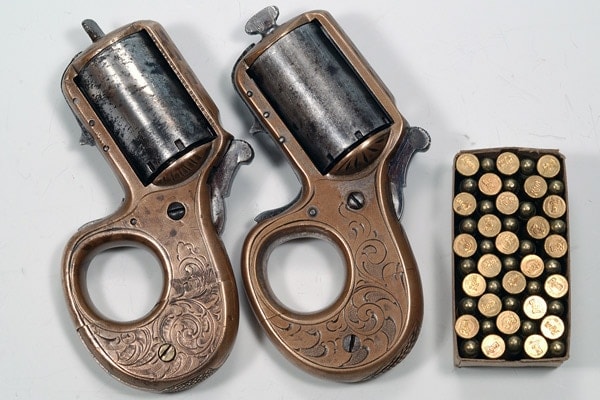 A small revolver with no barrel, the rounds simply fired from the open cylinder. Overall length was just over three inches and weight was under 5-ounces for the 7-shot 22 rimfire model.

The cylinder was detached from the revolver, loaded through the front, and then secured back to the gun frame with a wingnut style thumbscrew.

A brass end cap kept the other rounds from falling out. There was no hand guard and the small trigger popped out of the grip when the single-action hammer was cocked. A simple safety lever kept the gun from going bang unless the operator wanted it to. 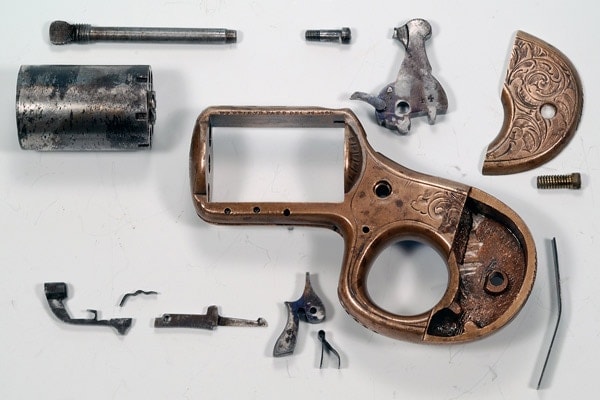 The grip, unlike a solid handgun grip, had a large circular cutout for a finger to lace through. This allowed the gun to be held with the barrel towards a target, or rotated and with the cylinder and barrel in the palm of the hand, to be used like a “fist-load” with the heavy brass grip forward. As you may imagine, this weapon could dish out a lot of love in a close quarters combat situation; if you couldn’t riddle them with bullets, you could always rotate the gun around and crack em in the grape.

These guns were all metal construction, using hand-engraved brass frames with silver plating and fine blue screws. Reid sold the guns for $10 packaged with 100 rounds of ammunition. Adjusted for inflation, this 1866 price in today’s terms is only $154.51, which made My Friend an affordable pal to have indeed. 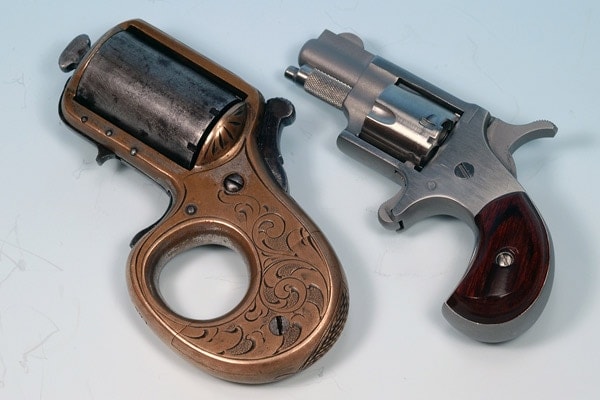 Records are unclear as to how many My Friends were made, but estimates are all less than 15,000 between 1865 and 1883 when Reid closed shop. What is much clearer is that they are all amazingly collectable due to their oddity. The vast majority were the original No. 1 style revolvers with that used a 7-shot cylinder stoked with .22 rimfire rounds. These 22 guns can be had in great condition for as little as $1000.

The No.2 Model, a five shot offered in both .32 and .41 rimfire, is one of the rarer birds with exceptionally fine examples running as much as $5000. Reid’s New Model, marked as such on the barrel, an improved No.2 with a super long (for the series) 2-inch barrel, go for less but still can approach a respectable $3000. 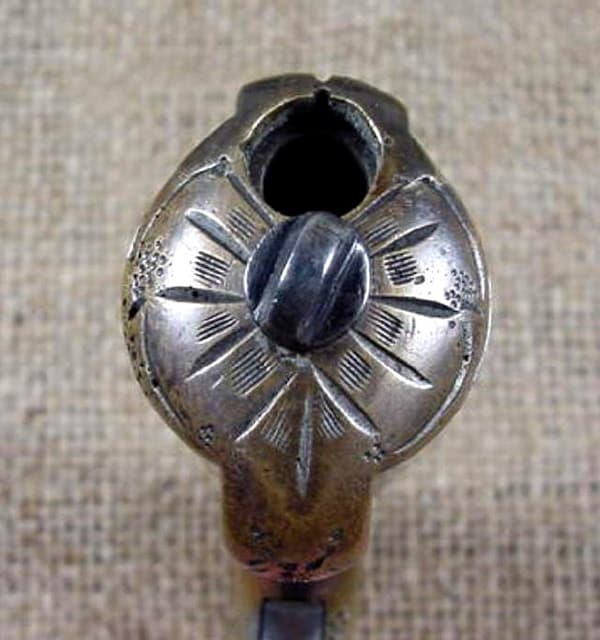 Business end of the My Friend.

All of these James Reid knuckledusters will be marked “My Friend, Patd Dec 26, 1865” and have a serial number on the back of the grip strap. Reid and his sons were the primary labor pool for these guns so you really get a feel for the craftsmanship when you handle one. Furthermore, this makes each gun unique, as the manual scrollwork was impossible to repeat identically every time. Another collector’s benefit is that these are all pre-1898 antiques but keep also keep in mind they were designed to fire blackpowder rimfire rounds from a brass frame gun and are now more than a century old.  Extreme care should be taken if you ever choose to fire one.

If you have one of these guns, or just want to know more information, your best bet is probably “James Reid and his Catskill Knuckledusters,” an entire 288-page book about these neat little firearms by Taylor Bowen. The rarity of the gun just goes to illustrate that there are probably more books about guns than there are guns themselves.

Still, if you are poking around an antique store, swap meet, or gun show table and come across one of these for a good price, it could very possibly become your new best friend.