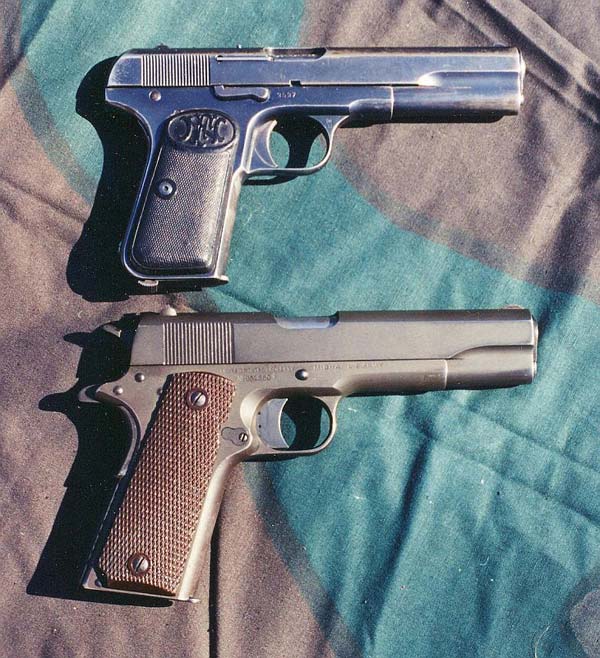 The FN 1903 (top) was the stepping stone in Brownings design career to the legendary Colt 1911.

Everyone knows that John Moses Browning begat the 45ACP Colt 1911 and then later helped give the world the P-35 Browning Hi-Power. What you may not know is that he tried these waters first with a long slide 9mm pistol years before either of these better-known designs. This forgotten Browning is the FN M1903, and, despite its obscurity, it’s a solid addition to the library.

In the early 1900s, Fabrique Nationale de Herstal (FN) was just a Belgian-based clearinghouse for small arms and their favorite designer was the American firearms guru, John Browning. He had collaborated with them to sell his very popular Model 1900, a small semi-automatic that was superbly reliable and some would say the preeminent pocket pistol of the time. The thing is, FN wanted to make large quantity military sales and the 1900 was a mouse gun. They wanted something bigger, and Browning set out to deliver on this request. 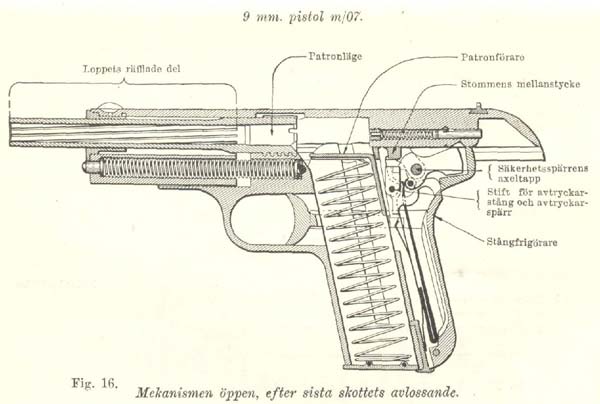 Operation of the FN 1903 pistol when firing from a Swedish document. The Swedes were enamored with the John Browning design.

In the evolutionary period of Browning handgun designs, the M1903 is something of the missing link. Originally referred to as the Browning No. 2, it was midway between the 1896-designed FN M1900 and his famous Colt 1911. Whereas the 1900 was a pipsqueak pocket pistol chambered in .32 ACP, the 1903 was a long slide that fired a much larger round. Browning invented the 9mm Long round for the gun, a centerfire 9x20mm that headspaces on the semi-rim.  Even though it was mild in power (240 ft. /lbs), it still would provide more performance than a .32.

The pistol used a 5-inch barrel and a single-stack 7-shot detachable box magazine, just as the later 1911 would. You can also take one look at the trigger and barrel bushing a disassembled 1903 and find them almost dead ringers for the 1911. Several of these had beavertail grip safeties almost just like the 1911. 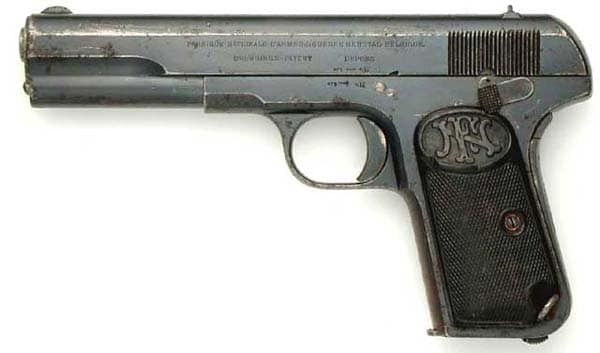 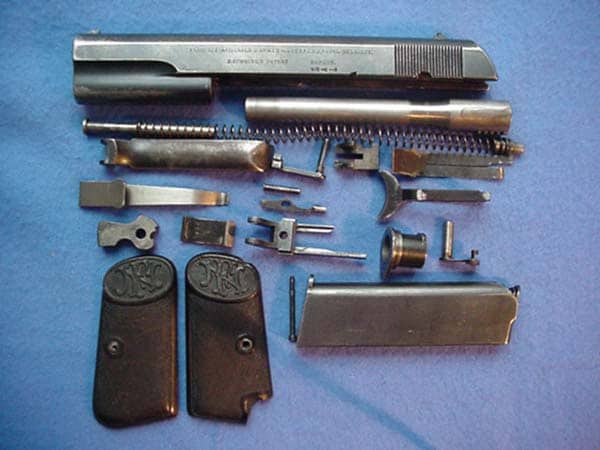 A simple blowback design like the earlier 1900, the 1903 is referred to ‘hammerless’.  Don’t let this confuse you as the hammer is there, it’s just bobbed and contained inside the slide. Like most early semi-autos, and many European designed handguns of the past century, it has a heel-release magazine rather than a push-button type. This is actually easier to manipulate by military and police officers while wearing winter gloves as well as having fewer working parts to break. Hinting at further Browning pistol designs, it was marketed with a wooden buttstock attachment that doubled as a holster—predating the Browning Hi-Power by about thirty years. 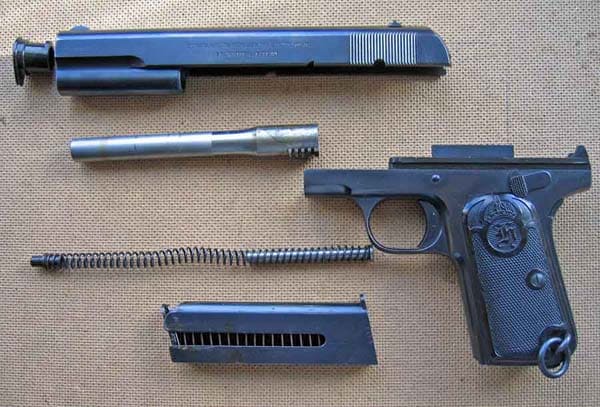 The FN 1903 was marketed hard in Europe and Latin America starting in 1904, as an affordable and effective alternative to the 9mm Luger for those wanting to upgrade from revolvers to a full-sized semi-auto. Several minor armies such as that of the Netherlands, Belgium, Sweden, and others bought several of the Model 1903s but the main success came from police sales to Tsarist Russia, Turkey and in Latin America. Sweden ended up liking the gun so much that they put it into production as the M07 under license by Husqvarna (yes, the chainsaw people) with a more military finish. Between 1904 and 1942, Husky in Sweden made about 65% of the 153,000 M1903/M07s, with the balance by FN. Although this seems like a lot of guns, it was only a fifth of the amount of sales as Browning’s earlier 1900 and a pittance compared to his later 1911 and Hi-Power designs. 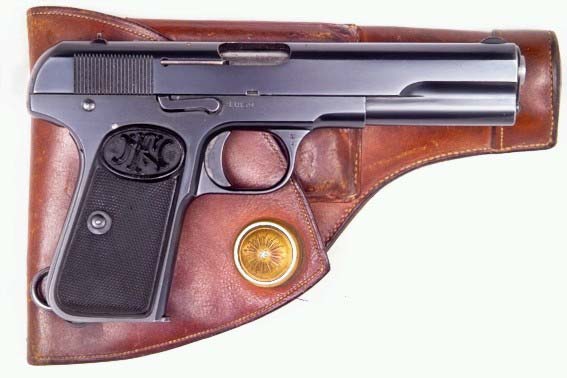 Many very nice FN made 1903s were imported to Russia where they were used by the Tsarist police. 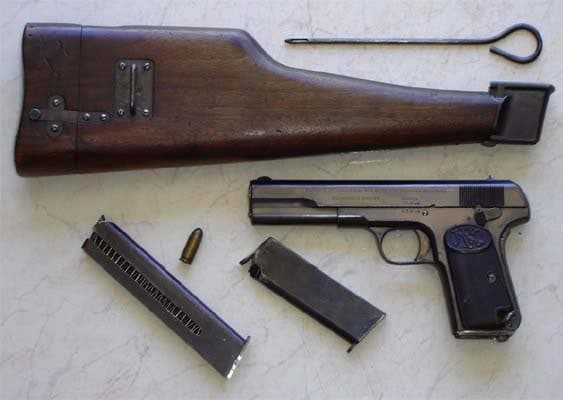 These guns were well liked, accurate, and easy to manage. As such, they appeared in combat all through the first half of the 20th Century in a number of strange places ranging from the Spanish Civil War to the Finnish Winter War, and the Russian Civil War to the Chaco war fought between Bolivia and Paraguay. The Swedes kept them in their arsenals as late as the 1980s when the Glock replaced these ancient weapons. The Soviets even used many of its design points in their later TT33 pistol. 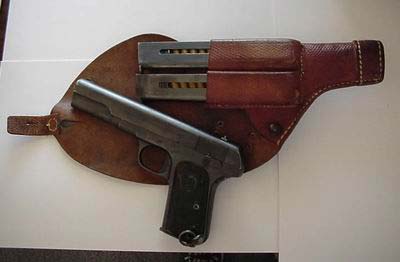 Many Swedish imports came standard with a flap holster and two magazines.

Since this is a Browning gun with certain old world panache to it and a solid military background, it has a draw with collectors. Many FN1903s that are floating around in the States were converted by the importer to fire the more common .380AUTO, rather than the Browning Long 9. This round, also invented by the Willie Wonka of American small arms, has many of the same characteristics only in a shorter case and the conversion is usually nothing more than simply inserting a short steel bushing ring into the chamber to close the gap between the length of the 9mm Browning Long and .380. It works well but if you want Sarco sells original Swedish military barrels to convert your gun back to spec. 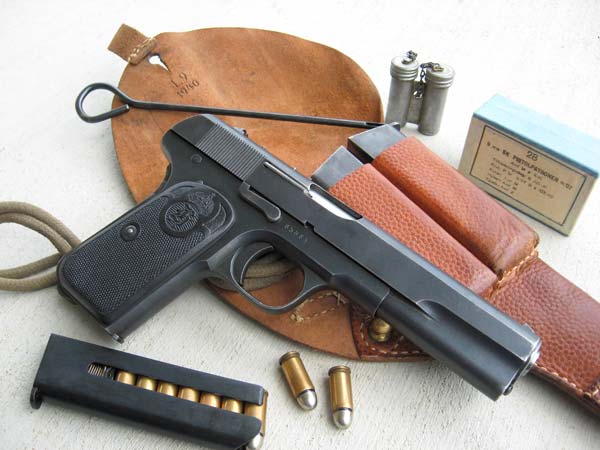 Swedish made 1903 guns will have distinctive “H” grips. 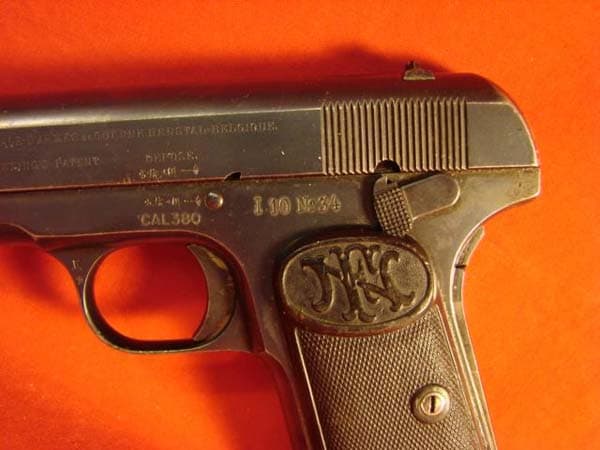 Many imported FN 1903s have been converted to .380 and are marked as such.

On the surplus market, these .380 rechambers run about $600 while the unconverted (or recently restored!) models tend to go about $100 higher. Exceptionally nice examples can run a little higher at auction.

Belgian-made guns will be marked along the slide and have distinctive FN grips while Husqvarna models will have a stylized ‘H’ over a crown on the grips. Look for matching serial numbers on the barrel bushing, barrel, frame, slide, and frame block before buying.  Furthermore, do not confuse it with the Colt Model 1903. This gun was also made by Browning and is very similar, but is a 32ACP pocket pistol, much like the FN 1900 that preceded it.

European made non-corrosive berdan primed 9mm Browning Long military surplus ammo comes into the US from time to time. These are usually Swedish or Turkish made in around 108-grain and sell cheap (when you can find them) from SAMCO and Century for about $50 per 280 rounds. Gad Custom in Wisconsin sells newly made stuff, but this can run about $30 per 50. The Serbs are now starting to load it, so you can expect some more of this ammo to start popping up. 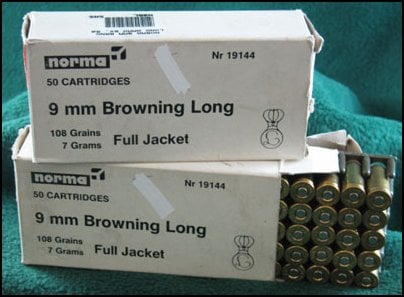 If you really want to shoot your surplus FN 1903 and can’t get your hands on 9mm Browning Long ammo, you can always make your own. This can be done by shortening .38ACP cases to .80 inch and seating over a load of 4-4.5 grains of your favorite powder and capping with at least a 115-grain 9milly bullet. Remember, Mr. Browning made his 9mm as something of a low-pressure magnum round, but seeing that newest FN1903 is somewhere around 75 years old, it’s probably a good idea to load light rather than hot. Whatever you do, DO NOT load regular 9mm Luger into your FN1903 and pull the trigger. The 9mm Luger has a shorter case, shorter rim, and overall length but larger case base and neck.  It’s a combination akin to mixing light and dark liquors; like your daddy said, you just don’t want to do it.