The Civil War's Smith Carbine: The case for rubber

Just before the US was torn apart by the disaster that was the Civil War, a New York doctor by the name of Smith invented a nifty carbine that fired a rubber-cased cartridge. This gun has proven to be much more poplar now than it ever was then. 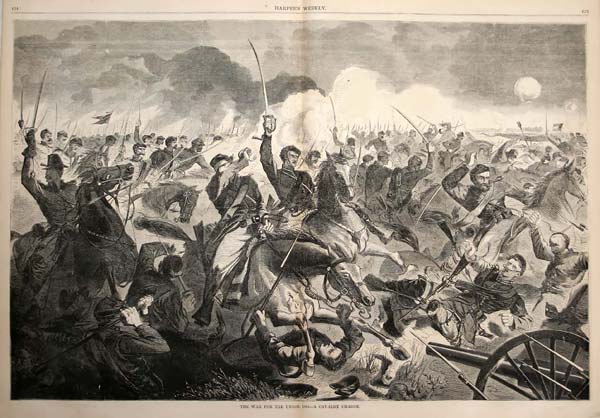 Union cavalry tactics early in the war was to charge with saber drawn and a carbine hung slung around the back of the rider.

Dr. Gilbert Smith of Buttermilk Falls, New York, had an enduring interest in tinkering with firearms and between 1855 and 1857, he took out no less than three patents (14,001, 15,496, and 17,644) for an ambitious new military rifle. He had 300 of these ‘Smith rifles’ made up for testing by the Army, some of which were reportedly passed on to the Pony Express. The military tried the Smith at the Washington Arsenal in the spring of 1860 and liked it enough to accept it placing an order for several thousand (after all, there was a war coming).

But more about that later. Let’s look at the gun. 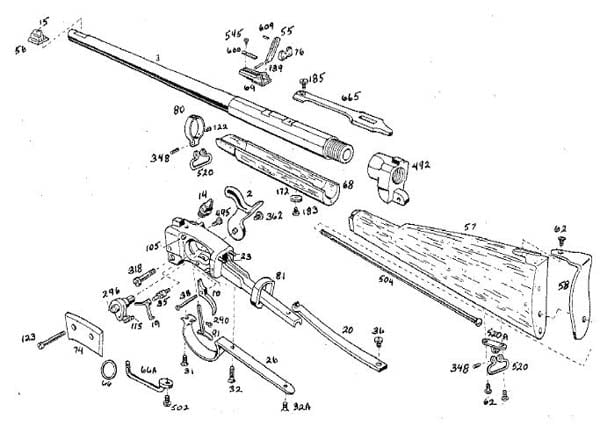 Smith’s gun was a rifled carbine, meant for horse-mounted troops in the cavalry and artillery (which was pulled by horses). It used a two-piece black walnut stock held on with a single band over the barrel and forearm for handling. Unlike many of the arms of the period, the handy little Smith had a 21.6-inch barrel with an octagonal shape to it, which gave an overall length of just 39.5-inches. Total weight, with a sling fed through the bar and ring on the side of the receiver as well as a round loaded in the breech was just 7.5 pounds. This is comparable to the size and weight of a Ruger Mini-14 of today.

Smith carbine. Note the takedown lever at the top of the trigger guard. 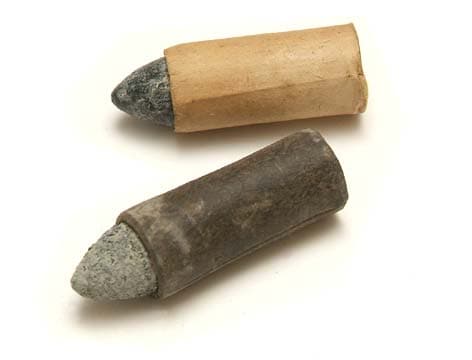 What set it apart was its action and ammunition. In a world of muzzleloaders, Smith’s carbine was a breechloading design. Breaking apart like a hinge action H&R shotgun of today, the gun pivoted open in the middle of the breech chamber.

Once open, the user would insert a lead bullet, which was sleeved in an India rubber case that held a charge of powder. When closed, this rubber case became a gasket seal in the case, generating a little extra power on the .50-caliber round, estimated at about 950-fps. The round was .863-inches long overall, was .53-inches wide, and weighed 363 grains, with the sleeve.

After it was loaded, a percussion cap was fitted, the hammer was locked back, and the gun was fired. While this sounds like a lot of work today, in 1860 this was simple and could be done far more rapidly than reloading a muzzleloader.

Smith carbines used a sling bar and ring attached directly to the left hand side of the receiver. 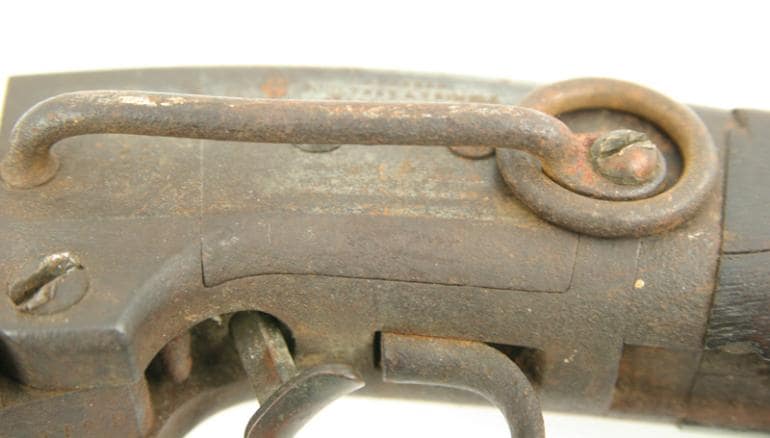 The Army bought some 30,362 guns just in time for the Civil War while 13.8-million rounds of ammunition were made by three different companies between 1861 to 1865. These came in two models, cavalry carbines that had the sling bar on the left hand side, and artillery models with swivels. Such famous early Union horse cavalry units as the 3rd West Virginia (whose members later helped chase down John Wilkes Booth), the 7th Pennsylvania, the 1st Massachusetts, and the 6th Ohio (which was heavily involved in the Gettysburg Campaign). The government’s cost of these guns was just $24 per weapon. 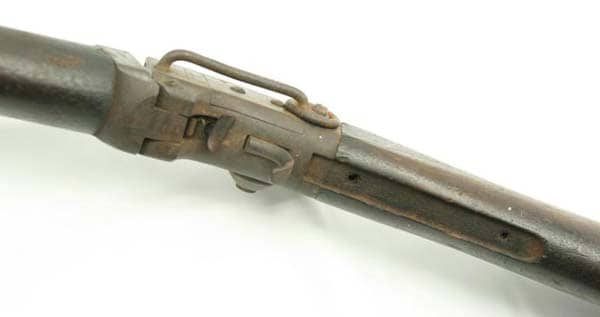 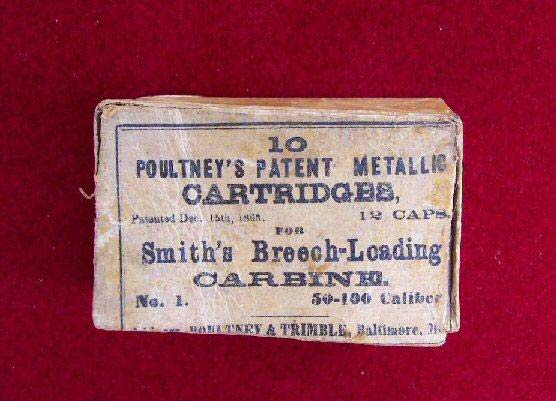 The problem with the gun was the rubber-cased bullet, which was unlike anything else in the Union arsenal. When stocks of rubber proved elusive, munitions works tried rolled paper, gutta percha, or rolled sheet metal as a sleeve to the .50 caliber bullets.

Moreover, these exotic cases would foul the chamber so bad when fired that after a few dozen shots the gun was unusable until cleaned. When the Sharps and Spencer repeating carbines appeared after 1862, the single-shot Smith fell out of favor.

By the end of the war, the guns were removed from service and sold at bargain prices as surplus. In 1866, the so called Fenians, a group of over 5000 mainly former Irish soldiers of the Union 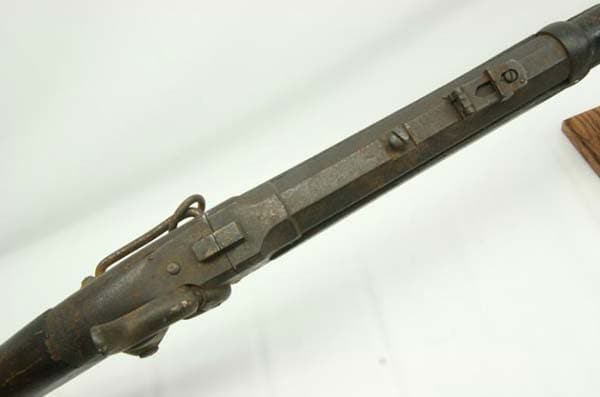 Army, invaded Canada from the United States and brought a good many Smith Carbines with them. At the time, they were cheap and obtainable.

For a generation or two, these guns still saw service across the land as hunting rifles and personal defense guns. One surplus Smith was used to nearly destroy the James-Younger gang in Northfield Minnesota by a local citizen, Henry Wheeler, and is on display there. 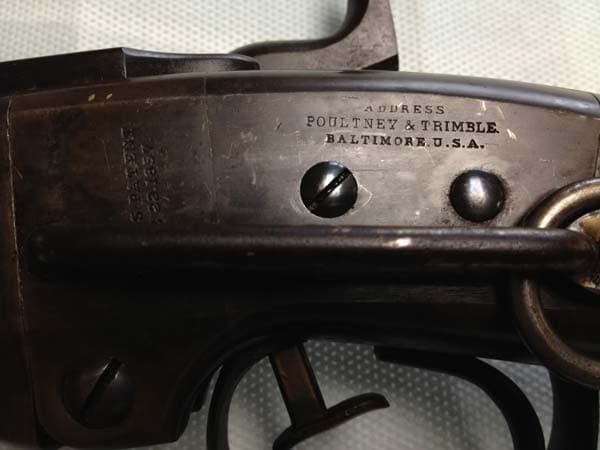 Powltney Trimble of Baltimore is often mistaken as the maker of these guns when in fact they were simply the distributor.

These guns, with their Civil War connection and low production run, are highly collectable even if they were considered ‘fourth best’ during the war. Very nice Smiths in good condition can go well over $3000  while acceptable guns are out there for about half that.

Priority is given to guns with extremely low serial numbers as they are pre-war production and could have been used by the Pony Express.

There are far more replica Smiths out there than there are real ones, so first of all be sure to look for any signs of modern production. While the Union Army probably would have bought them if they had been made, no Civil War era Smith carbine came from Italy, so let that be your first lesson. While two different manufacturers, 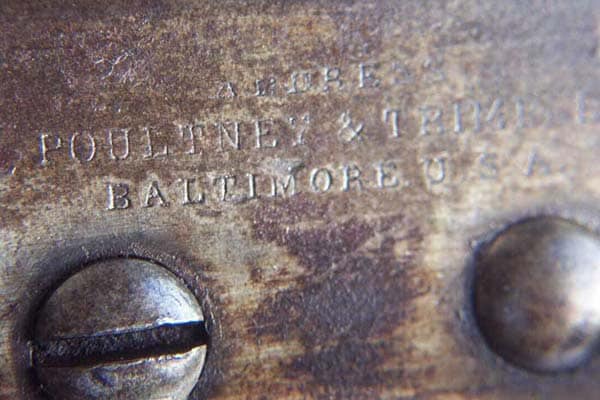 American Machine Works of Springfield Massachusetts (marked ‘Amn.M’ch.wks’), American Arms Company, and Mass Arms Company of Chicopee Falls (marked Mass Arms Co) made these guns, they will all have ‘Smiths Patent’ on the breechwork.

Powltney & Trimble of Baltimore was the selling agent for most of these guns and their name will most likely be on correct guns.  An additional inspector marks such as ‘GP’. “LFR’ or ‘JH’ on the stock and ‘B’ or ‘R’ on the butt strap tang would be present if the gun was bought directly by the Union Army. Beware of guns that are in ‘mint condition’ as they may have been refinished, which will significantly reduce the value. It’s ok if the gun has a few dents, dings, a nice patina, and even a small amount of surface rust.

The hinge and latch systems of vintage Smiths are quite often found to be worn to the point of no longer locking up, so be sure to check this on any Civil War era gun. Over time, these parts were often replaced by later owners with aftermarket screws so be on the lookout for repairs.

Remember, if shooting one of these relics you risk not only the gun but also yourself, so have it checked and graded before you load it up and let it rip.

Roughly 120 years after the first Smith carbine was made, they went back into production for the collectors market. US gunsmith Mike Yeck started making Smith repros in the 1970s and his guns, although a modified design, proved popular. These guns are extremely sought after in the Civil War reenactor/living history community with those who would replicate Union horse cavalry. After all, everyone has a Spencer or Sharps repro, so those who wanted to be different went for the Smith.

By the 1980s, Navy Arms started picking up on the craze. Today, the primary source for these replicas is the Italian firm of Pietta. 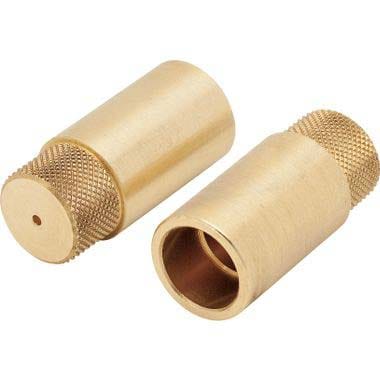 To replicate the unusual rubber-sleeved cartridges that the Smith used, many who use repros buy plastic, brass, or vulcanized rubber new production rounds for these guns.

Some have used pieces of half-inch garden hose, which is cheaper, but may get you some odd looks. Reproductions using the cast .515 bullets and a sleeve of their choice over 20-30 grains of FF/FFF are commonly seen in the woods of states that have primitive weapon hunting with breechloaders over .40 caliber such as Mississippi.

In the end, we think old Doc Smith would be happy with how things turned out.