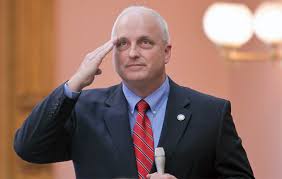 The Ohio House of Representatives passed a bill on Wednesday that would expand self-defense and concealed carry rights for law-abiding citizens.

House Bill 203 was approved by a vote of 62-27, with six Democrats and the entire GOP faction of the House supporting the measure.

Though between the protestors and the contentious debate inside the Ohio Statehouse, the road to clearing the House was a rocky one for HB 203 due largely to its variation of a ‘Stand Your Ground’ provision, which would allow one to use force, including deadly force, in any place a person has a lawful right to be.

Under current Ohio law, one has no duty to retreat only when they are in their homes, cars or vehicles of immediate family members.

“A person facing a life-threatening situation should not have to have a duty to flee and hope for the best,” the bill’s sponsor, state Rep. Terry Johnson (R-McDermott), told The Toledo Blade. “They should have the right to protect themselves and protect their loved ones.”

However, unlike Florida’s SYG law, which gives the state the burden to prove that one did not act reasonably in a self-defense situation, the Ohio version of the law places the onus on the individual to prove that he/she acted in accordance with the law and did not provoke or exacerbate the situation.

“I don’t want ‘stand your ground’ brought here,” Johnson explained, as reported by the Cleveland Plain Dealer. “I don’t want someone who looks a certain way to be hassled and rousted. I want just the opposite. … There’s no kill-at-will here. This is not an expansion of Castle Doctrine.”

Still, despite this key difference, there were plenty of opponents in attendance who argued that the law would create more carnage.

“You pass this, somebody’s going to die because of this — absolutely,” said state Rep. Fred Strahorn (D-Dayton). “Nothing in that provision needs to be there.”

“There’s nothing wrong with current law,” he said. “Castle Doctrine tells it all. But if we pass this, trust me, we’re going to see an increase in homicides in this state.”

While the SYG portion of the bill proved to be controversial, there were other provisions that seemed to be less divisive, such as reducing the number of training hours need to obtain a concealed carry permit from 12 hours to four hours.

In any event, here is a complete list courtesy of the Buckeye Firearms Association:

– Eliminate the requirement that another state’s license eligibility substantially comparable to Ohio’s for the attorney general to enter into a reciprocity agreement.

– Scratch the requirement to be an Ohio resident to get a license.

– Expand the exemption from training for former military members.

– Specify that if a court in another state has granted an applicant relief from a factor that makes them ineligible to possess a firearm, it does not disqualify them for a license.

– Prohibit someone who was dishonorably discharged from the military from receiving a license.

– Expand the category of offenders who are prohibited from acquiring, having, carrying, or using firearms.

– Specify that a person may not possess a firearm if doing so would be unlawful under federal law.

– Authorizes the attorney general’s investigators to be armed while they conduct certain investigations.

– Specify that the exercise of a constitutional or statutory right does not, in itself, constitute the crime of either disorderly conduct or inducing panic, and does not constitute reasonable, articulable suspicion of criminal activity.

HB 203 now heads to the state Senate for consideration.