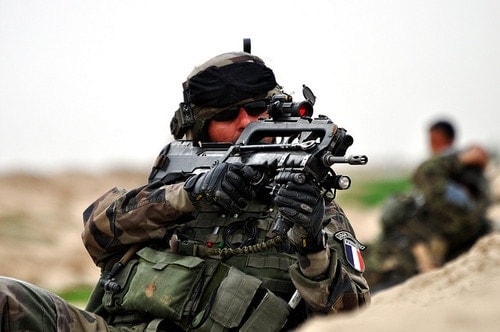 The FAMAS was first introduced in the 1960s and continues to be updated for military service. Because of it’s shape, the gun has earned the nickname “le Clairon” or “the bugle”. 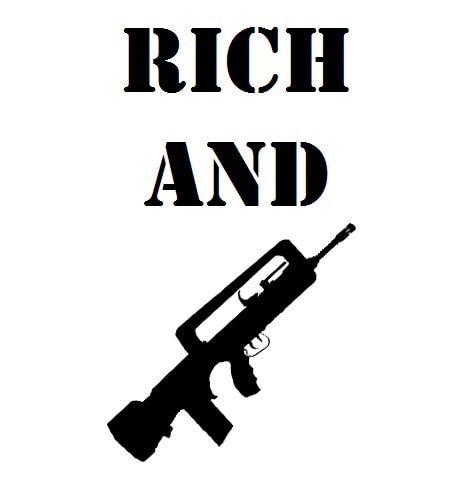 In warfare, France has always kinda gone their own way—not necessarily the wrong way, but definitely a way all their own. General “Stormin” Norman Schwarzkopf once said, “Going to war without France is like going hunting without an accordion.” Well, oddly enough, the current French service rife, the famous FAMAS, was seen as something of an accordion—or at least a bugle.

In the 1960s, the French military was very dated. The standard infantry weapon was the locally designed and built MAS49/56 rifle. This 7.5mm semi-auto only battle rifle had serious handicaps namely a 10-round magazine and 9-pound weight. The MAT-49 submachine gun that augmented it was handy, but fired low-powered 9mm pistol ammo. When facing potential enemies armed with AK-47 style assault rifles, the French were up merde creek.

The FAMAS would replace the weird MAS-49/56 battle rifle.

This is why in 1967 the state weapons arsenal at Saint-Etienne started looking at a new rifle to replace the MAS and the MAT. 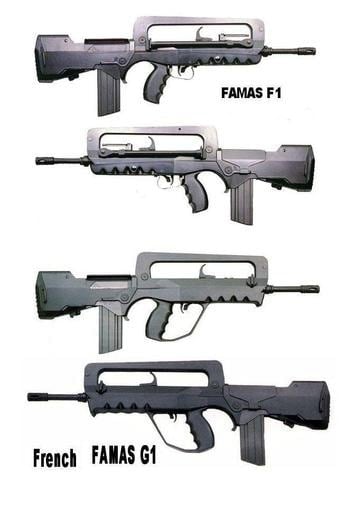 Firearms engineer Paul Tellie led the Saint-Etienne team and proved himself quite forward thinking, even by today’s standards. Specifically, to give the Army a more compact rifle, he went with a bullpup design.

This concept brought the action back into the stock area and pushed the trigger group forward under the barrel, shortening the overall length of the gun. With the bullpup layout of the new gun, overall length was just a compact 29.8-inches. When compared to the US M16A2 rifle, which was 40-inches long with essentially the same length barrel, you could see the benefits.

The streamlined 5.56mm-chambered action was a lever-delayed blowback that was very similar to what the Hungarian maverick Pal Kiraly used on his Cristobal carbine. The rifle was fed through a proprietary 25-round strait box magazine that inserted into the stock and the three-groove (not a misprint) 1:7 twist 19.2-inch barrel provided reasonable accuracy.  The rear sight, like many modern service rifles, was a single diopter with two separate flip-ups for fast range changes. The front sight was fully adjustable. 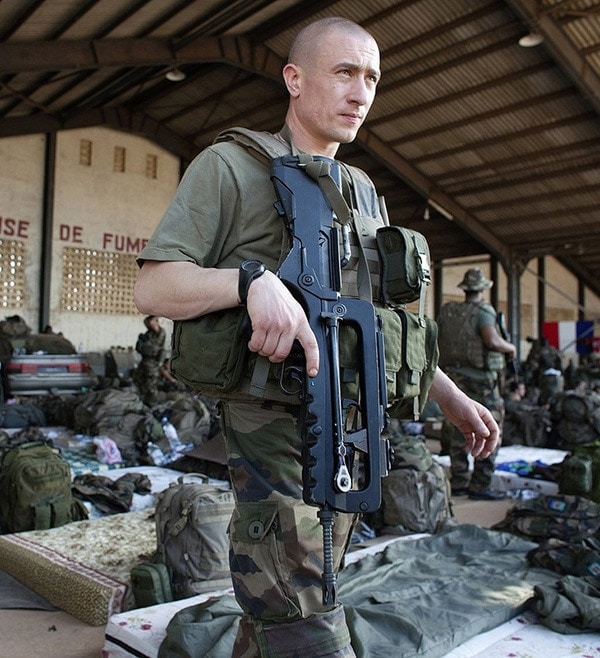 The FAMAS is very compact rifle. Note the bipod folded along the receiver.

Almost unique among service rifles, the new gun had a built-in bipod that folded up along the side of the receiver when not in use. A further neat feature was that it could be easily converted from left to right hand use since the charging handle was mounted centrally. All that was needed was to switch the ejection port cover from one side to the other. The muzzle-mounted flash suppressor could also mount the standard MAS 62 bayonet and fire 22mm NATO rifle grenades.

The weapon was four-position select fire, capable of single, three-round, and full auto cyclic operation at a very fast 1100-round per minute rate of fire. It should be noted that this is much faster than other standard 5.56mm weapons. Of course, this high rate of fire led to controllability issues in longer bursts but allows three-round bursts at a very close to point of aim. Many have called it the king of CQC Assault Rifles due to its size/rate of fire combination. 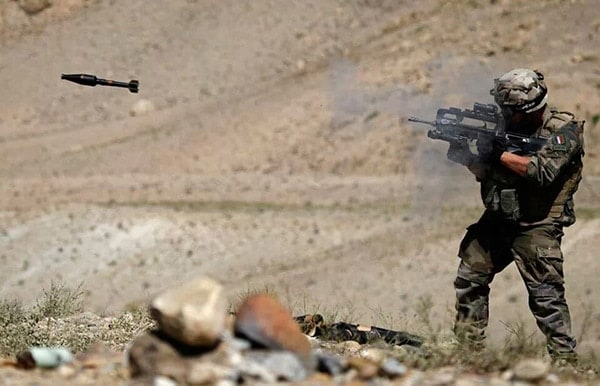 The FAMAS can also fire the ever popular rifle grenades.

After an 11-year R&D period, the gun was finally adopted by the French military in 1978. Named officially the FAMAS (Fusil d’Assaut de la Manufacture d’Armes de Saint-Etienne, English for “Assault rifle from the Saint-Etienne weapon factory”), its shape led it to most commonly be referred to as “Le Clairon” (the bugle).

It wasn’t the first bullpup assault rifle to reach service (as the Austrian Steyr AUG beat it by a few months) but it was the first one adopted by a major military power. 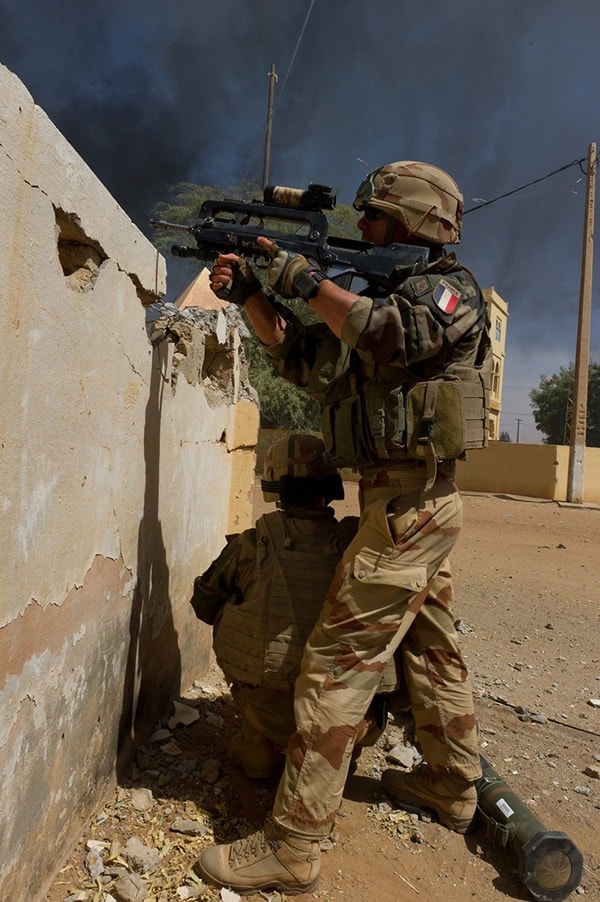 The FAMAS has seen plenty of hard service with the French military across the Third world.

In contradiction to the popular though perhaps “unmannered” adage that French military rifles are “never fired and only dropped once,” the FAMAS has seen lots of action across the globe in the past thirty years. France has long been seen as the gendarme of Africa, which means their military—epically elite units like the French Foreign Legion and Paratroopers and Marines—are frequently deployed to the region. 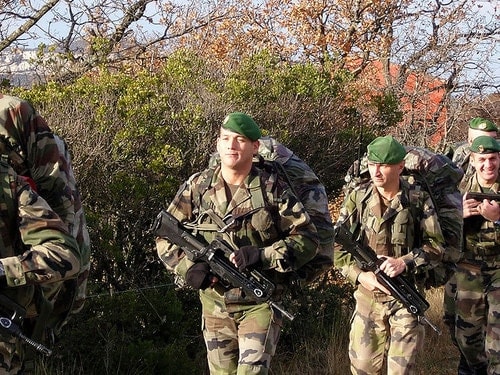 The FAMAS was almost the first bullpup adopted for military service, beat out by the Stery AUG by just months. 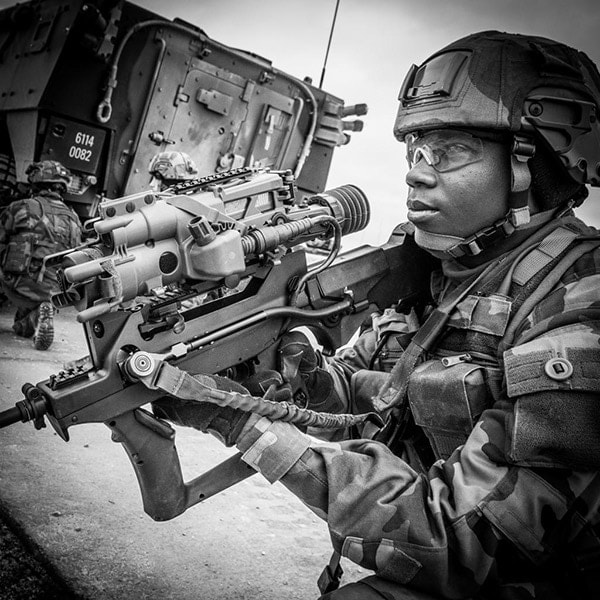 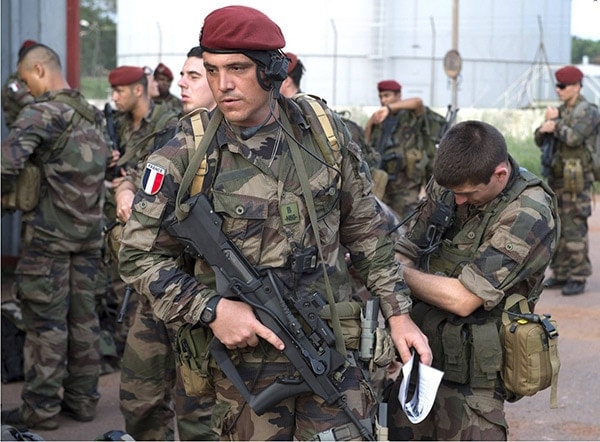 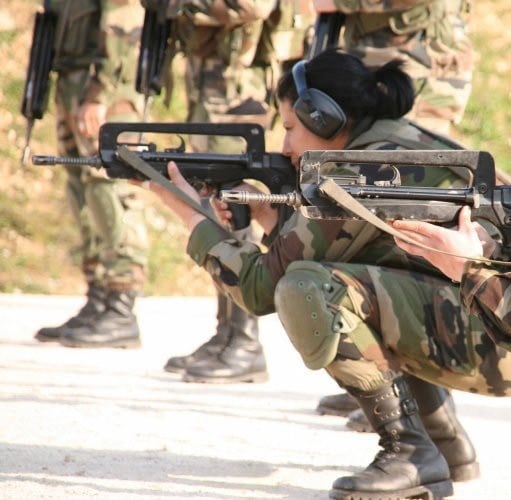 From Chad to Djibouti to the Ivory Coast and now Mali, the FAMAS has long been taking a beating and dishing it up hot. Add to this peacekeeping duty in Bosnia, Lebanon, both Gulf Wars and Afghanistan and you get that this unusual French bugle has effectively matured over time. 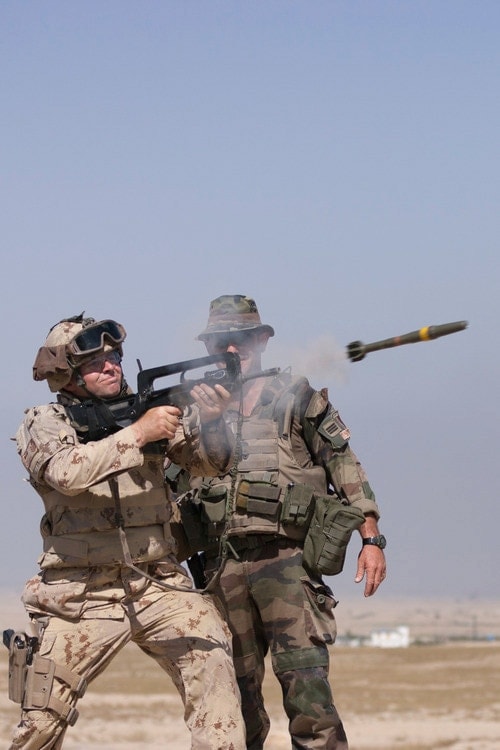 Canadian soldier having too much fun firing a rifle grenade from his FAMAS. 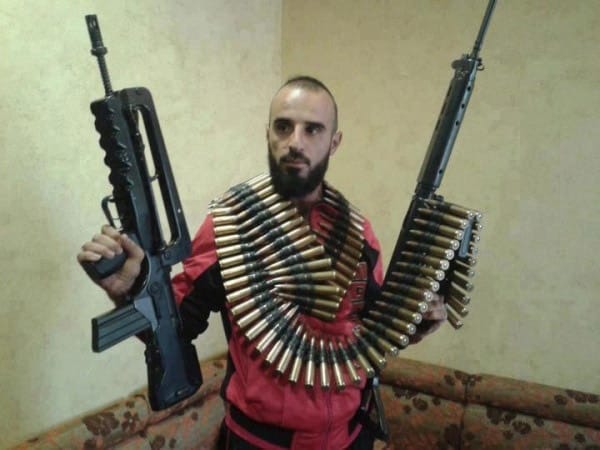 The FAMAS (like almost all other modern firearms) is making cameos in Syria. 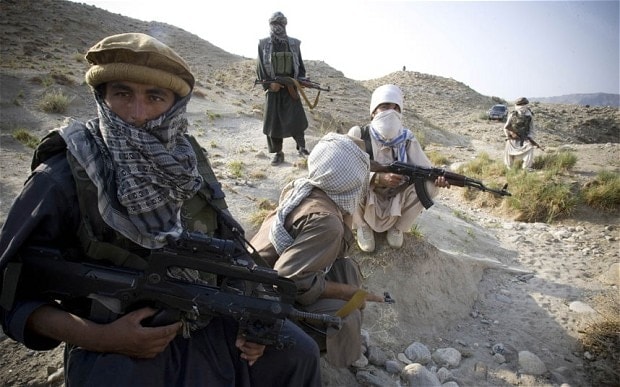 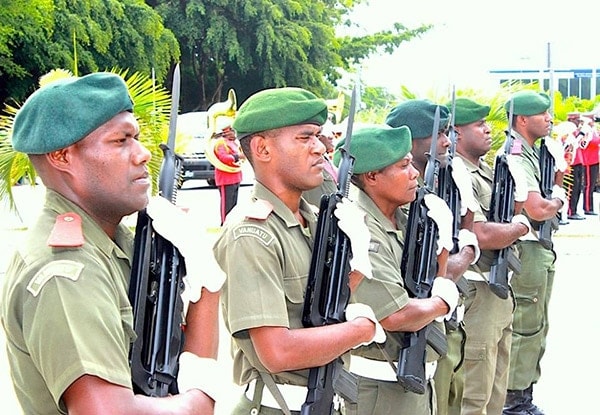 Even the mighty military of Vanuatu uses the FAMAS. 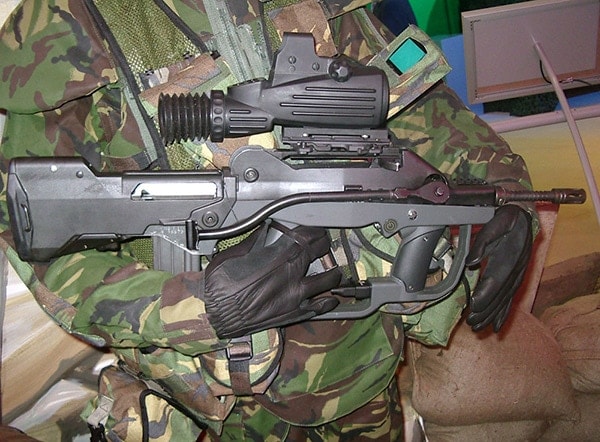 With lessons learned from hard field use in the third world, the gun was updated as the G1 with an improved trigger guard and heavier grade polymer. Notably, these guns also have a NATO STANAG magazine well to accept the same mags that the AR15/M16 series rifle will take. A further upgrade, to the G2 standard has a more modern 1:9 twist for current NATO greentip ammunition as well as the addition of Picatinny rails for optics and accessories.

Since 2000, some 31,455 FAMAS G2’s have been modified with what is known as the FELIN (Fantassin a Equipement et Liaisons Integres, Integrated Infantryman Equipment, and Communications) system. This system incorporates an EoTech reactive sight, cooled IR day/night optics with targeting reticle and video relay capability and a multi-button control in a new forward grip. Among other things, it allows the FAMAS to be fired around corners and over walls while the user remains behind cover, sighting the rifle through a helmet-mounted display. 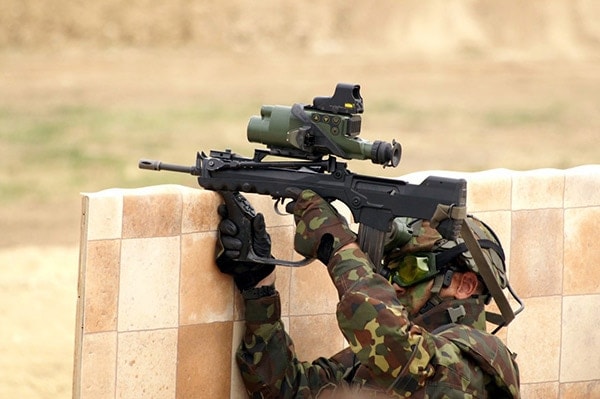 FAMAS G2 with FELIN system can be used to fire over walls with the operator remotely viewing the optic.

Of course, it costs beaucoup Euros and doubles the weight of the rifle, but c’est la vie.

The French have made nearly 700,000 F1/G1/G2 models at the MAS arsenal at St. Etienne for their military and police forces in the past three decades. Very few have been exported and those that have were usually sent direct from the French government as military aide to former colonies like Senegal, Gabon, and Vanuatu. A few have also been passed on to Iraq and the Free Syrian Army as gifts from Paris. Still, if rumors of the FAMAS’s imminent replacement hold true, we may one day see parts kits coming into the country. 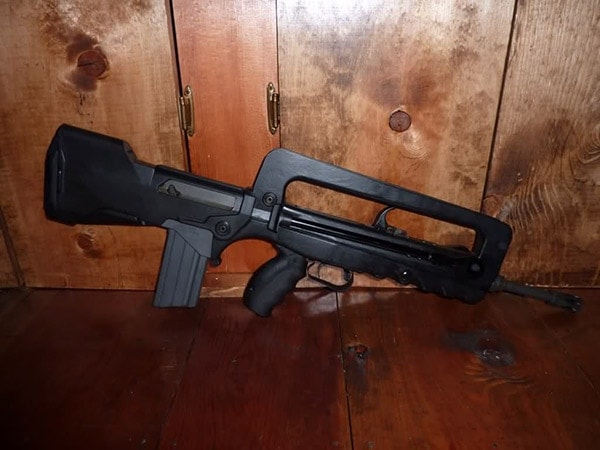 A unicorn… we mean a FAMAS F1 on the US civilian market.

But until that day, all this means that they are trés rare in the US. Century Arms imported a few semi-auto only F1 variants in the 1980s. Note that these were MAS made guns and not Century’s typical product. That being said, these rare Frenchies top the charts at prices upwards of $8,000 when they come up for sale.

Mitchell Arms imported an Italian made FAMAS-like bullpup rifle in the 1980s that is slightly more affordable. Officially named the Jaeger AP85, this .22LR gun kind of looks like its French inspiration but is a very different gun. These run about $500 on today’s market and we cannot tell you why they even go that high as they have a reputation that is less than stellar. 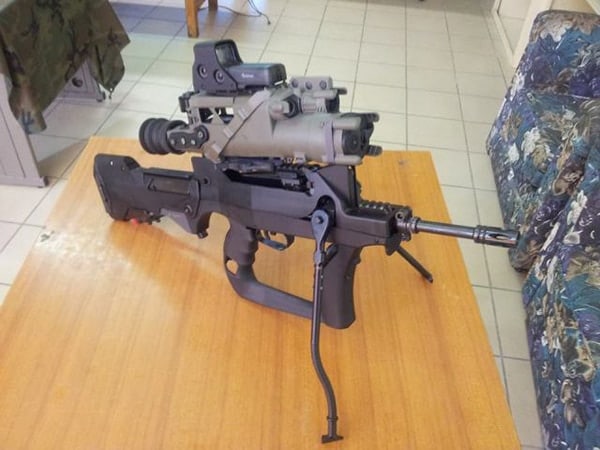 FAMAS with night vision and eotech as used by French Foreign Legion.

Unfortunately, barring Call of Duty and Airsoft, it seems as an American the best way to get your hands on a good, slightly used FAMAS is to join the French Foreign Legion.