DoubleTap, Heizer court battle ended not with a bang but a whimper 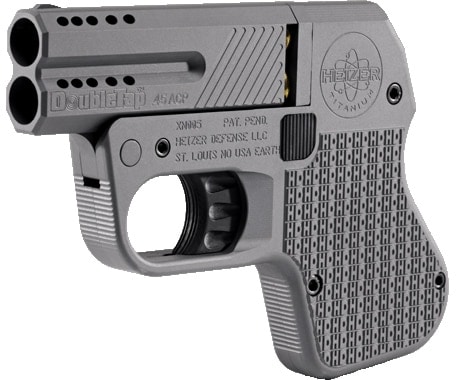 When the two companies were together, this is what they looked like.

The two-year court battle between former partners Heizer Aerospace and DoubleTap Defense ended with both parties quietly parting ways with little to no resolution.

According to court documents, both parties agreed to dismiss the case in a U.S. District Court in Missouri on July 3, with each party paying its own court costs and attorney fees.

The dispute was over which company designed the DoubleTap pistol — a handgun that piqued the interests of gun enthusiasts — and owned the rights. The DoubleTap is a new take on the derringer pistol that is about the size of an iPhone in length and width, and chambered in .45 ACP.

Originally, the two Missouri-based companies were so committed to the project that the grip was inscribed “HD” in the titanium frame over and over. That was in October 2011, but in the following months it was a roller coaster ride for the two companies of faith, skepticism and then anger.

Crowds gathered around the company’s booth at the Shooting Hunting Outdoor Trade Show and the National Rifle Association annual convention to learn more, Guns & Ammo touted that “a million would be sold,” but a year later in the fall of 2012, the two companies split bitterly.

Ray Kohout, owner of the company DoubleTap and the pistol’s patent, said he terminated his contract with Heizer because of its inability to fulfill its manufacturing obligations. He then partnered with Azimuth Technology (now Axis Engineering Group) to manufacture the DoubleTap.

Meanwhile, Heizer introduced its own version of the DoubleTap with the company name Heizer Defense. Both models, the HD1 and HD2, were similar in size, shape and function to the DoubleTap, except one has a single barrel and the other has two.

In October 2012, Kohout filed a $6 million lawsuit against Heizer claiming the company stole his intellectual property. In the suit, Kohout claimed to be the sole inventor of the design, but Charles Heizer, owner of Heizer Aerospace, argued that he and his company provided the expertise needed to design and manufacture the gun, something Kohout lacked.

Heizer filed suit in September 2013 against DoubleTap in order to obtain the patent rights to the DoubleTap. In the complaint, Heizer said Kohort “depicted only the exterior of the gun and made no attempt to diagram or describe the interior of the gun or explain how the gun would work.”

Today, both companies maintain their own limited product line.

DoubleTap offers a handful of options with its pistol like aluminum or titanium, .45 or 9mm, and ported or non-ported barrels.

Heizer Defense has dropped the double barrel model, and now only offers the single-barrel model called the Pocket Shotgun, or PS1. It’s chambered for .45 Long Colt and .410, and in either black or white — and still maintains the “HD” pattern on the grip.