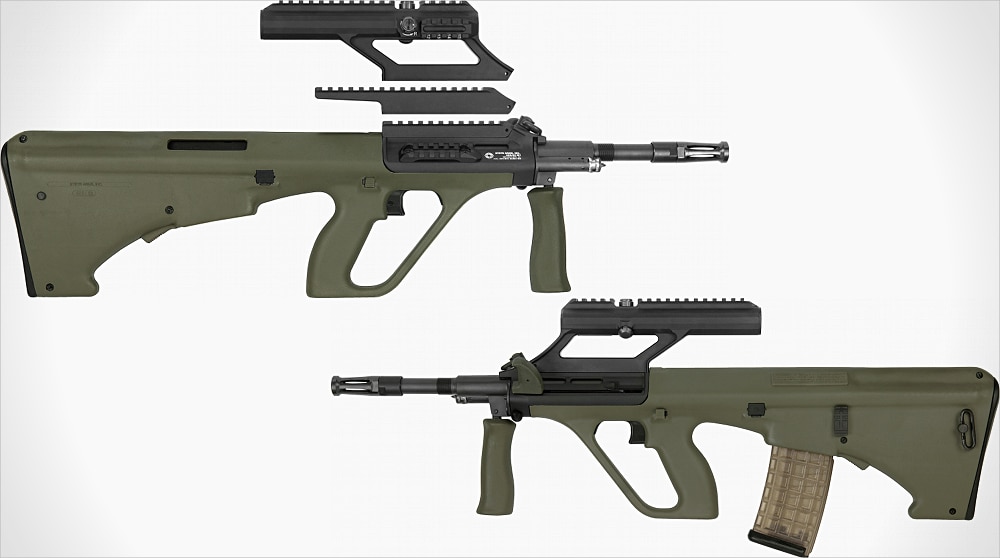 In a move that will please all of today’s bullpup enthusiasts, from modern adopters to traditionalists, Steyr is announcing an updated AUG M3 A1 with a modular optical rail system.

The Steyr AUG has always been designed for use with an optic, a forward-thinking proposition for a rifle that was developed in the late 1970s, and the new M3 A1 is no different. The updated bullpup uses a handful of different optic platforms and forgoes iron sights altogether.

Since the latest generation of powered optics can run for five years or more on a single battery, the time couldn’t be better for a rifle designed specifically for them.

The AUG M3 A1 features a modular receiver design that can accommodate two different rail systems as well as two different fixed-power scopes.

The first setup is a flattop Picatinny rail that rides flush with the rifle. This is for the bulk of optics, red dots with risers, scopes on cantilever mounts and holographic sights. The second rail is for red dot sights paired with flip-out magnifiers or scopes with standard rings. 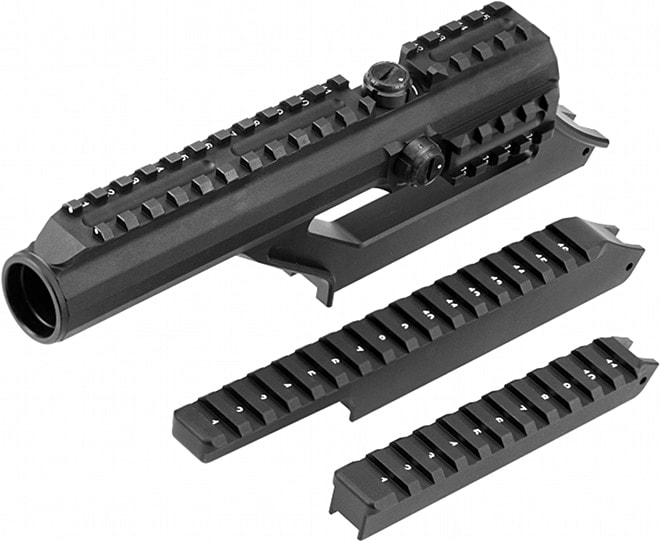 The two rail systems and a railed scope. (Photo: Steyr)

Then there’s the fixed-magnification scopes. Steyr offers the new AUG M3 A1 with an optional fixed-power riflescope in the spirit of the original AUG, yet updated for the modern shooter.

Originally the AUG was designed with an integral 1.5x scope. This is a good level of magnification at shorter ranges, including close quarters, that gives the shooter a confidence boost and an accuracy edge. The AUG M3 A1 is still offered with a 1.5x optic but is also offered with a more powerful 3x scope for longer-range shooters.

To deal with the limited field of view that comes with magnified optics the AUG M3 A1 scopes are railed as well, for use with red-dot sights or any other accessories one might want their rifle to have. The scopes are low-profile to the point where a set of short iron sights would be just as usable as a mini red-dot sight.

The scope sports recessed knobs for windage and elevation that won’t block any accessories and the optics have short rails at the 3- and 9-o’clock positions for offset optics or lights or laser sights. All models come with an updated VLTOR quick-detach front sling swivel, a nice change from the original fixed sling point.

Naturally just as the original AUG the M3 A1 is chambered for 5.56 NATO and is perfectly suited to shoot .223 Remington as well. It uses proven AUG-pattern magazines which Steyr manufactures in 10-, 30- and 42-round capacities.

Unlike the first steely-grey AUGs the M3 A1 has the user’s choice of either matte black or olive drab green polymer stocks. All in the AUG M3 A1 weighs 8 pounds, which isn’t a featherweight by AR standards but is pretty light for a bullpup and given that the weight rides closer to the shooter, will still feel exceptionally maneuverable and easy to point.

The AUG M3 A1 is built around a 16-inch heavy barrel with their unique tulip-shaped elongated flash hider. The barrel uses a quick-change design that can be used to swap lengths, profiles and even calibers. Left-handed conversion is as easy to do as swapping the bolt and reversing the ejection port cover. The whole package measures in at just 28.25 inches long.

Steyr is selling the AUG M3 A1 with user’s choice of rail or optics system, with the basic railed models priced at $2,099, the 1.5x scoped model at $2,499 and the 3x version at $2,599, in-line with other premium bullpups. Like most firearms the MSRP is usually higher than the street price, which is often several hundred dollars less.

The AUG M3 A1 is a short-stroke piston-driven bullpup carbine with an adjustable gas system. It’s been proven to be reliable and accurate in the field and can take a beating and keep on shooting without batting an eye. If you’re on the market for a bullpup then the AUG M3 A1 should definitely be on your list of guns worth checking out.

For more details and specifications check out Stey’re press release.