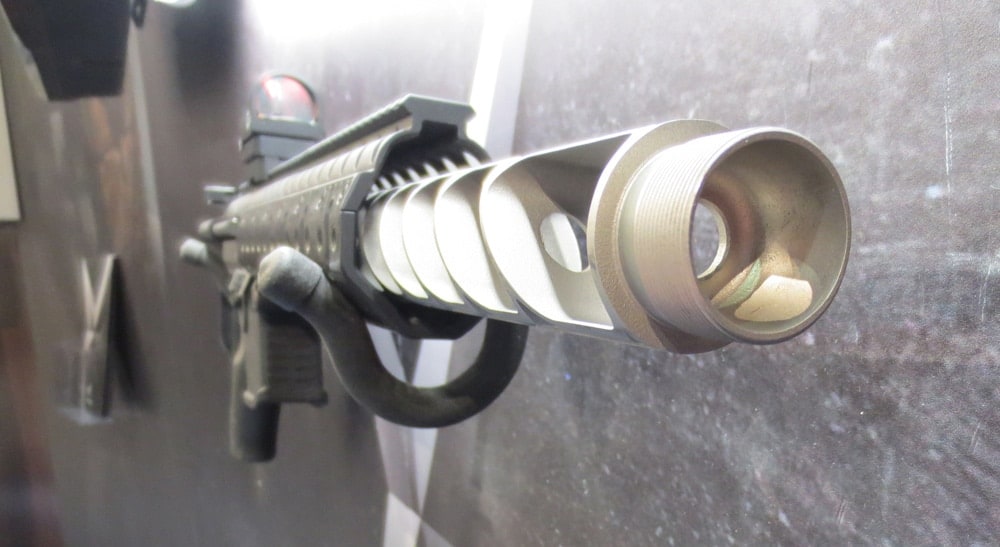 Introduced in 2013, the Sig MPX was equipped with the device in question, a 9.5-inch muzzle welded onto a 6.5-inch barrel. (Photo: Daniel Terrill)

The federal judge presiding over a case alleging a Sig Sauer muzzle device was misclassified as a silencer by federal regulators shot down the government’s argument but he didn’t exactly buy the company’s argument either, so he’s likely going to ask the feds to revise their ruling.

“My strong preference would be and current intention would be to remand the matter so that the (Bureau of Alcohol Tobacco Firearms and Explosives) could consider the issue under a correct standard,” said Judge Paul J. Barbadoro, according to the transcript of the hearing between Sig and the ATF in a New Hampshire federal court last month.

Such a ruling would afford the ATF to once again classify the item as a silencer – devices that are heavily regulated – and provide a better argument to support such a decision.

Barbadoro said the agency’s classification was just because the item contained features necessary for the function of a silencer but superfluous for a muzzle brake. But he would not defer to the ATF’s ruling because the agency failed to prove that Sig intended to circumvent federal law by mislabeling the item.

“It looks to me like they manufactured the internal part of a silencer, they welded it to the gun to get it above 16 inches, and you just need to put a sleeve over it and you’ve got your standard issued silencer, that’s what it looks to me as a layperson, but that’s not the issue I’m talking to (the ATF) about,” the judge said of the device, which is a 9.5 inches long and welded onto a 6.5-inch barrel.

Since the device was fixed to a firearm and would only function as a silencer when equipped with two other components, which owners would have to buy from a third party, and could technically function as a muzzle brake, it falls into a grey area within the law, Barbadoro said, but feared it would ultimately undermine the statute.

“I think substantively it’s a very important issue, this statute is a very significant statute, and I am not going to be the one to say without holding any trial, receiving any evidence, making any findings of fact, that I’m concluding as a matter of law that this is not a silencer and you can go ahead and sell it around the world. I’m not going to do that. That would – that is a – something that requires very careful consideration of evidence,” he said.

“I understand the problem from (the ATF’s) perspective. And (Sig’s) answer to that is regulate the people selling the sleeve, because the sleeve doesn’t have any use other than to make a muzzle brake into a silencer,” he said. “Believe me, it looks like a loophole.”

Yet, the judge said the ATF failed to directly state in court documents leading up to the hearing that it thought Sig intended to skirt regulations by calling the device something it isn’t.

“Your position really is, they’re lying … but you didn’t find that they were lying,” he told attorneys with the ATF and added, “[Y]ou didn’t say … ‘You just are wrong. You’re not intending to market this as a muzzle brake. You’re intending to market it as a silencer. We’re calling you out on it. We don’t believe you because the evidence doesn’t support a belief in the truth of what you’re saying.’”

The judge said perhaps he would defer to the ATF’s ruling if it had been so blunt in its response to the gun maker.

“It does appear to me that you guys (Sig and the ATF) know very well that this is a silencer part, and it does appear to me that this is not likely to have a significant market as a muzzle brake,” Barbadoro said. “So, whether that means it’s a silencer or not is an issue that the ATF should decide, but they need to do it under the correct standard, and they need to do it in a way that’s not arbitrary and capricious.”

The judge will issue his ruling this month and if he does remand the case, attorneys with Sig asked that he give the ATF a deadline to issue a decision.