In the U.S. military’s more than 100-year flirtation with the Colt 1911, quite a few experimental variants were proposed but never adopted. 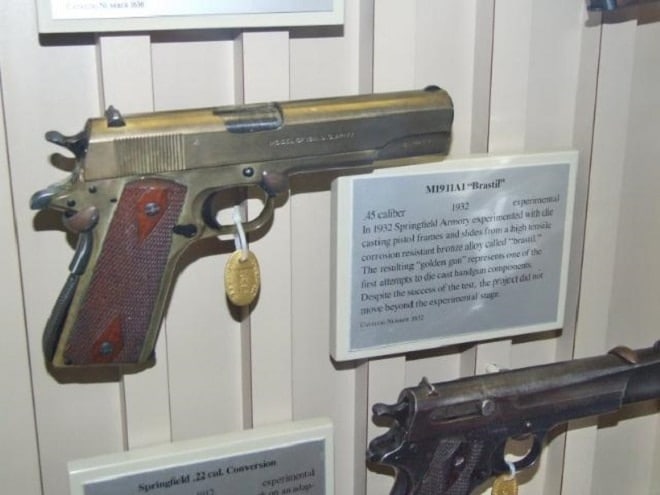 This pistol was an experiment conducted in 1932 by Springfield Armory to produce the standard GI out of a die-cast alloy called “Brastil,” a registered trade mark of the Doehler-Jarvis Corp. in Pennsylvania. Brastil is a corrosion-resistant alloy of copper, zinc, and silicon with a high tensile strength and at the time was cheaper than steel– especially when using a die cast process.

The bad news was Brastil warped over time, making the guns unusable. While some 500 were ordered for testing, less than half were delivered and only two “golden guns” survive today (Serial #1 and 2), both of which are in the Springfield Armory Museum. 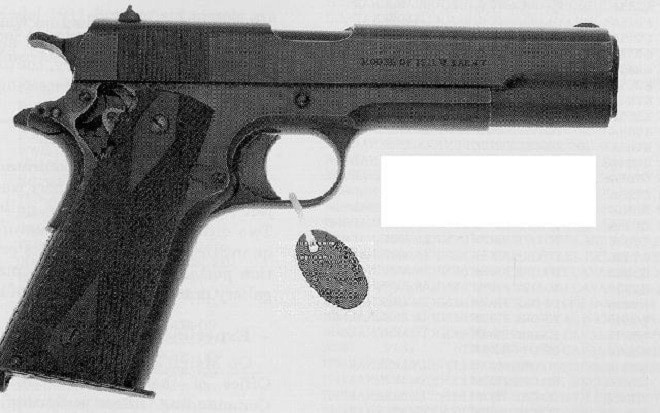 In 1917 the Army’s the Chief of Ordnance asked for five otherwise standard 1911s to (we’re not making this up) convert to full-auto only and mount them under the wing of an airplane to see if they could be used to arm aircraft for the purpose of dogfighting. While no doubt a quick burst of .45ACP– especially from a battery of several guns– would have come in handy at short range, the Army shelved the idea. 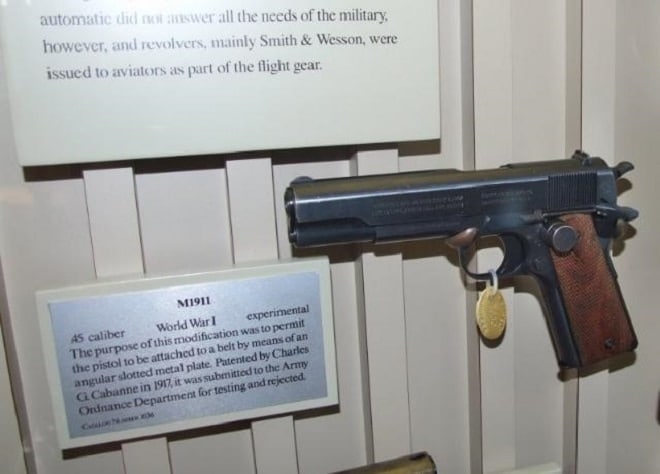 With everyone looking to do their part in World War I, a fellow by the name of Charles G. Cabanne of St. Louis, Missouri designed a holster attachment consisting of a slot that fit on the standard GI pistol belt. What fit in the slot? A lug (known modestly as the Cabanne Device) that fit on the frame of a 1911, which allowed the gun to clip on the belt.

Sounds great right? Well other than the fact it left the trigger open to accidental discharges, blocked the slide stop, let water drain into the sear, and spoiled the grip of the hog leg, almost nothing. 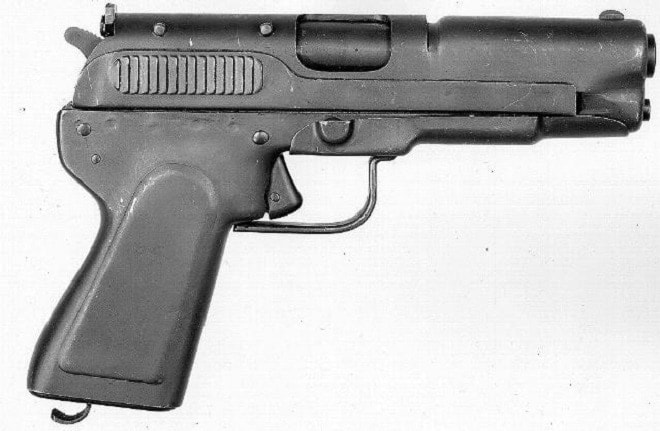 After World War II the Army was intrigued by captured German and Japanese weapons that used simple metal stampings to speed and simplify production and sought to get some of their own.

One of the experiments was a series of 20 sheet metal 1911s made by the Guide Lamp Division of GM in Dayton, Ohio. If you know your firearms history, hattip if you remember the same company made the single-shot .45 ACP Liberator pistol during the war.

Well this clunky 51-ounce monster weighed in at almost a pound more than the standard GI longslides the Army already had a million of, so its evolutionary tree was barren. 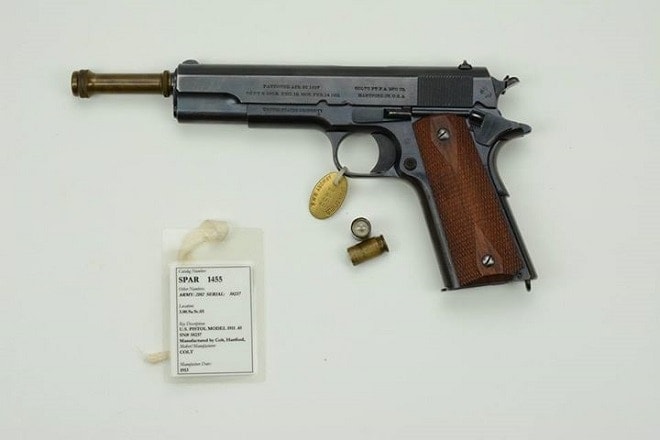 Today firearms trainers and competitive shooters love SIRT guns, an inert training device that uses an on-board laser to help diagnose marksmanship issues. Well the Army had the same idea more than a century ago when they made this U.S. Model 1911, SN 58237, in 1913.

It was modified as a training pistol complete with a SIRT-gun style Ever Ready light that would project a flash onto a target to show where the bullet would hit when the trigger was pulled. While it worked, the peacetime Army of the time didn’t have enough scratch to pursue it further.