Most Americans, to say nothing of firearms aficionados, are familiar with well-known gun makers such as John Moses Browning and Samuel Colt, yet few gun nuts know the role that Hugo Schmeisser had in firearms development. To put it in perspective, Hugo was to battle carbines and submachine guns, what John Browning was to handguns and machine guns.

Hugo Schmeisser was born in 1884 into a family legacy of arms designers. His father helped develop the Dreyse 1907 pistol while his brother had a hand in early machine gun research. The family name Schmeisser translated from German to English means, appropriately enough, “thrower.” Soon enough he began to work alongside his brother in the factory town of Suhl, long the home of German armament works.

The trench warfare of the Western Front during World War I came as a shock and a surprise on both sides of the fighting. All of the 1914 armies of Europe went to war with large caliber bolt action rifles with sights graduated out to an optimistic 2000-yards and beyond. This type of firearm was unsuited for face-to-face combat in the muddy trenches of Flanders.

In 1915, the German government asked for a small, compact, automatic rifle to solve this problem. At the time, Hugo was working for Bergmann Waffenfabrik as a junior designer and took up the assignment. His design: a wooden-stocked 9mm 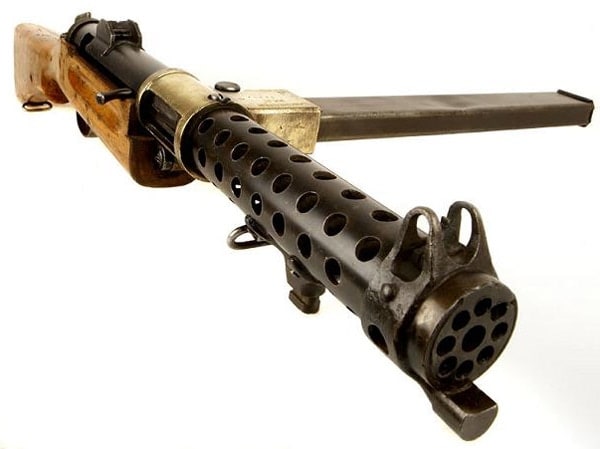 carbine that was only 32-inches long. Using an open-bolt blowback design, the fully automatic weapon would spit out 500 rounds per minute as long as the 30-round magazines held out. Dubbed the MP18 and remembered simply as the Bergman, it was the first practical submachine gun to see combat. More than 30,000 were made and saw service in conflicts around the world for generations.

The MP18 gave Schmeisser a solid resume to which he added the MP28, an improved design for the Suhl-based Carl G Haenel Company in the lean interwar years of Weimar Germany. The British, who dubbed it the Lanchester submachine gun, directly copied this firearm in 1940 (without license). More than 100,000 Lanchesters were produced and remained in British service as late as 1970.

The Strange case of the MP40 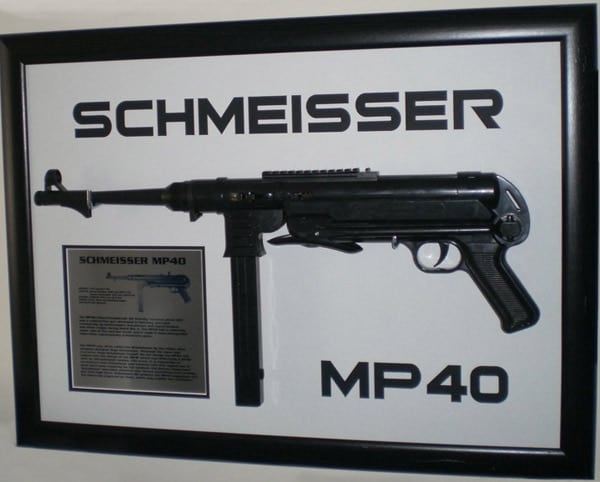 Oddly enough, one of the firearms that is commonly referred to by Schmeisser’s own name, the 9mm MP40 submachine gun, he had very little to do with. The Maschinenpistole 40 (MP40) of which manufacturer Erma Werke built more than a million for the German military, was actually designed by Heinrich Vollmer in 1938.

Dutch researchers have showed that much of Vollmer’s design could be inspired by previous work done by Schmeisser but nonetheless, it is Vollmer’s name on the patent. Schmeisser held the patent on the weapon’s magazine, which he had designed for his own unsuccessful wooden-stocked MP41. Nevertheless, Allied troops examining captured examples of the burp gun took to calling it “The Schmeisser” and the name stuck.

The German Army did a study in their recent combat actions and discovered that the majority of firefights they were encountering were in the 50-200 meter range. For this, 9mm submachine guns were inadequate and 8mm Mauser bolt action rifles both too slow, squandering the effectiveness of the long range round. The answer was a rapid-fire weapon that used an 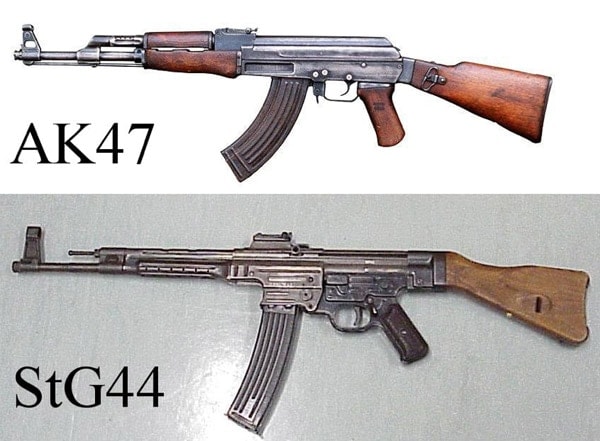 intermediate-sized round. Thus began development of the StG44.

If Hugo Schmeisser is thought of as an artist who, instead of paints or clay, molded his artwork from steel, wood, and plastic, then his masterpiece was the StG-44. This design, perfected over two years and numerous prototypes, used metal stampings for ease in mass production. Firing from a 16.5-inch barrel (similar in size to today’s M4), the rifle was only 37-inches long overall. Its 7.92x33mm round is ballistically similar to today’s 7.62x39mm AK round. Being fully automatic, the rifle would fire some 500 rounds per minute at a controllable rate that made short bursts possible for trained soldiers. Once adopted, it was christened the Sturmgewehr (Storm-rifle) and over 400,000 were handed out to German troops in the final days of World War II. Today it is generally thought of as the first successful assault rifle.

After the war, the 61-year old inventor fell into Allied hands where Western intelligence experts debriefed him. In June 1945, the Soviet Army occupied Suhl and did the same. Evidently, they liked what they heard because they packed Schmeisser off to the Ural Mountains armament factory town of Izhevsk along with several of his design team. There the Soviets put him to work for six years. While it may never be proven that the German engineer had a hand in it, what is for sure is that the Avtomat AK-47 rifle was born in Izhevsk at about the same time. Today Russia’s biggest munitions enterprise, Izhmash now calling itself the Kalashnikov Concern, still produces the AK-47 and others, based in the same city, despite recent money problems.

Schmeisser was returned to Suhl in 1952 where he died and was quietly buried the next year, but his designs are still very much alive.

This article originally ran on Guns.com as “Hugo Schmeisser: The Godfather of the assault rifle?” on September 5, 2012 and has been edited for content.