Green Party's Jill Stein: Americans should be persuaded to disarm 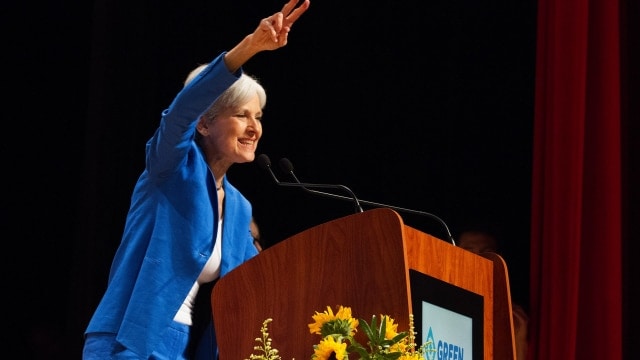 Long-shot Presidential candidate Jill Stein, the nominee for the fourth place in the polls Green Party, outlined her feelings on gun control and confiscation in a recent in-depth interview.

The interview, published Wednesday by Vox covers the 66-year-old physician, activist and politician’s views on a number of subjects from student debt to immigration. Naturally, the topics of guns came up.

Stein reiterated the party’s (who she also served as Presidential candidate for in 2012) stand on universal background checks and an assault weapons ban (in favor of both) before being asked if a gun confiscation program would go “too far.”

It’d be hard to do that at this point. So, we establish background checks and assault weapons ban as a floor. And we add to that stripping the gun manufacturers of their immunity — so currently they have immunity right now from lawsuits holding them accountable for dangerous weapons, and for putting those weapons in the hands of dangerous people.

Stein goes on to explain that, with 42 percent of the constituency in favor of some sort of increased gun regulation, that confiscation is “not off the table” but would be hard to pull off in the U.S. with its current culture or by force.

In Norway, Norway really moved forward with gun control by persuading people to give up their guns, and in order to do that you need to have the proper things in place. So in Norway, among other countries, police have also demilitarized and go without guns. Not in all areas of Norway, but in many. And, interestingly, in those districts where police are not armed, they are actually safer. It’s not only the public that is safer but the police are safer because they cease to become targets.

I think we need to begin to move in that direction, and I do believe as a society that we need to disarm because we are now an armed garrison state, and everyone is in the crossfire right now — black lives are in the target hairs, and police are also in the target hairs. We’ve become a culture of open carry — not just guns but assault weapons and sniper rifles.

It’s really dangerous to be out there in the world. This is not a world we can safely live in, that our children can safely live in — we need to change. But in order to do that we need to come together. We need to take steps toward this that are confidence building measures, so we don’t become a state in an all-out shoot-out, which we could become readily if government authorities were flying in and taking weapons away. That’s going to be very problematic; that’s not going to happen, because people are armed.

Then, on the notion that a “Norwegian model” may work if used properly:

America is very armed, and you don’t want to trigger an all-out gun fight right now. Like in Norway, people were persuaded this was time for them to disarm. I know as a medical doctor you often need to persuade people to do things they don’t want to do, and to do that you have to establish trust. And you have to establish a common vision and a dialogue and a sense of community — then you can move forward.

According to Open Secrets, she has raised $1.9 million in campaign contributions, about half what Libertarian Gary Johnson has garnered. When contrasted against Trump ($140 million) and Clinton ($435 million) the figure is a drop in the bucket when it comes to a national campaign. The latest RealClear Politics poll shows Johnson’s and Stein’s poll numbers at 9 percent and 3 percent, respectively in a four-way race. The Green Party is on the ballot in 47 states.