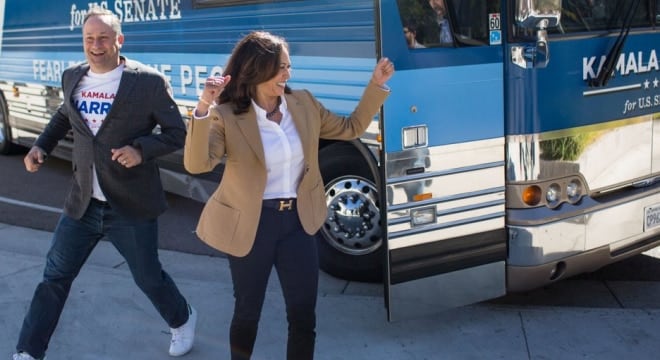 California Attorney General Kamala Harris, who was running for U.S. Senate at the time of Albert Sheakalee’s arrest, made much of his case though no charges were pursued against him and the seized firearms were later returned. (Photo: Kamala for Senate)

A California FFL holder whose extensive firearm collection was seized in dramatic fashion had to fight Kamala Harris’ Department of Justice for two years to get them back.

The Clovis area man, Albert Sheakalee, 59, was arrested and had 541 guns seized from his residence on the orders of the California DOJ in 2015 after he was deemed a prohibited firearms possessor. Now, with no charges ever pursued and after a two-year legal battle with the state to get the guns returned, they have been handed over to a licensed dealer to give back to his family following a court order.

Sheakalee went through mental health treatment in 2014, which, unknown to him, landed him in the DOJ’s Armed Prohibited Persons System (APPS) database. This– as touted in a press release at the time by then-state Attorney General Kamala Harris– barred him from firearms ownership and triggered a 12-hour raid on his home by Bureau of Firearms Special Agents which ended in his arrest for possessing illegal firearms.

Sheakalee, who had a clean criminal record, owned a retirement home and was the retired budget director of Fresno Community Hospital. He had maintained a federal firearms license for over two decades for buying, selling, and collecting firearms which was still listed as being valid at the time of the raid. Seized by California authorities were 209 handguns, 88 shotguns, 234 rifles, 181 standard capacity magazines, 10 high capacity magazines, 100,521 rounds of various ammunition, and 10 firearms registered with the DOJ as “assault weapons” including a .50 caliber rifle.

Now, with Harris in Washington as a U.S. Senator, Sheakalee’s attorney, Mark Coleman, feels the whole thing was grandstanding.

“As far as I am concerned, it was a real political deal. Harris was running for senator,” Coleman told the Fresno Bee.

The press release, in which Harris commended DOJ agents for their bravery in the case, was picked up and carried by media outlets across the country and overseas and repeated by gun control advocacy groups.

Guns.com has been in contact with the DOJ– now under Attorney General Xavier Becerra– the Sheakalee family and his attorney and will update this piece if a response is obtained.