Exclusive: Inside the CMP and the word on Garands and 1911s (PHOTOS) 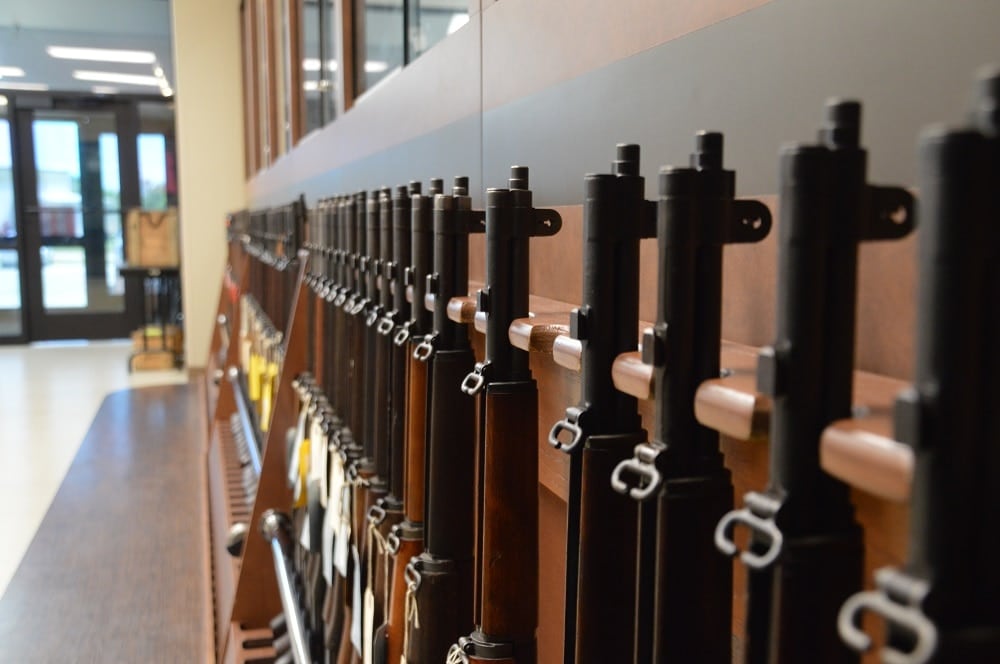 The CMP for the past several decades has been in the M1 Garand business, and business has been booming. (Photos: Chris Eger/Guns.com)

We recently had the chance to tour the surplus rifle warehouses of the Civilian Marksmanship Program in Alabama to find out about both current and potential future operations.

Split off from the U.S. Army under the Clinton-administration in 1996, the new CMP still conducts training courses and holds shooting competitions and clinics nationwide but draws its primary source of funding through the sale of surplus firearms to qualifying members of the public which were donated to the organization by the Army.

To see just what the non-profit has on the shelf, we visited the CMP’s South operations in Anniston. Co-located near the Anniston Army Depot — which is actually in nearby Bynum — and stores much of the Army’s stockpile of guns and items not needed for current operations, the CMP has a series of warehouses dotting the rolling hills of the area.

Unfortunately, most of them are nearly empty.

While now-retired CMP boss Orest Michaels told Guns.com in 2010 the organization had 125,000 M1 rifles on hand including complete rifles, stripped receivers, and welded drill rifles, the group is coy about just what the numbers are today after several years of brisk sales and surging interest in U.S. martial rifles.

As Jim Townsend, CMP’s business development officer, walked us through a tour of their largest warehouse, he swept his arms over a large expanse of empty floor space and said, “When I first started here, this whole side of the building was full of M1s.” Repurposed crates that once contained M1s returning from allies in Greece and Denmark now hold everything but.

Repurposed crates that once contained M1s returning from allies in Greece and Denmark now hold everything but.

Why keep the empty space? Townsend acknowledged there are huge possible influxes of weapons on the horizon, including an estimated 86,000 loaned M1s being boxed up to ship back from the Philippines and mandates to allow selling off surplus M1911 pistols sitting in storage over at the Depot.

There are a few, like setting guidelines for how the organization, which has for the past several generations just sold rifles, will store, check and handle the pistols. Depot officials tell Guns.com they are working with the CMP for on that. Another big hurdle is that there is no secretary of the Army to sign off on the transfers. Five months into the current presidental administratio and the Department of the Army has been on auto-pilot. 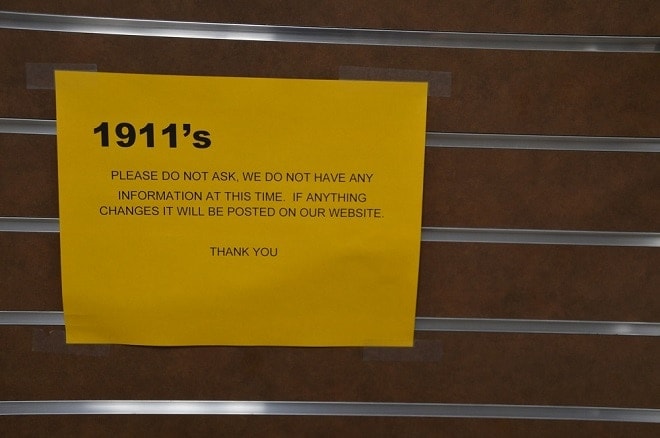 To be sure, the group still receives a trickle of guns and gear from the Army, and the CMP dutifully combs through each new mystery crate that gets transferred.

The CMP employs about 100 people spread across their operations in Camp Perry, the marksmanship complex in Talladega and Anniston, with most concentrated at the latter. Ensconced in one warehouse are a dozen dedicated small arms experts, the organization’s armorers who meticulously inspect every firearm to see if it is junk, safe to fire, or somewhere in between.

At workstations filled with gauging tools and parts, the group works through crates each filled with “100 serial numbers” that run the gamut from near-pristine correct grade rifles that would make a collector cry, to a bare and beaten stripped receiver with extensive pitting and rust. The armorers then verify it’s unloaded, inspect the trigger group to make sure it’s complete and working, clean the barrel and bore — gauging for both the muzzle and the throat for erosion — check the headspace and the timing, check the bolt and the furniture, the op rod and the springs. 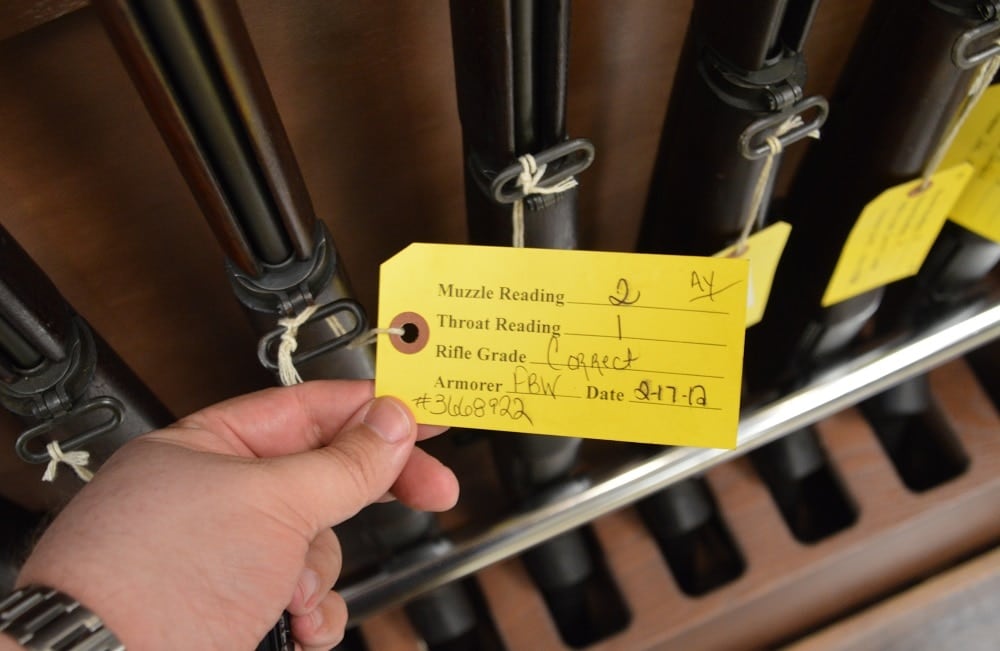 Every gun sold through the CMP — with the exception of deactivated drill rifles — are checked, gauged, and test fired beforehand

Guns missing parts are attended to, with an effort to keep the same manufacturer on the same rifle as much as possible — for instance, Springfield on Springfield, Winchester on Winchester, and everything is detailed on a repair and inspection checklist. A second armorer comes behind the first as insurance and the gun is test fired — twice — with standard 30.06 ammo in a special firing booth. The guns are then put up for sale through the organization, though the numbers of most grades are effectively so low right now that they are out of stock, leaving them to find their way to racks at the CMP’s two stores or to their online auction site — but more on both of those later.

M1s too far gone or missing too many components are often reworked into new “Special Field Grade” rifles which are completely refurbished and are given a new production Criterion barrel, new walnut furniture, and a new sling. These guns get a full eight-round clip during their test fire to make sure everything is as it should be. Current costs for these very shootable rifles is $830.

The CMP also supports the Army’s ceremonial rifle program by servicing rifles for veterans’ groups and some M1s are refurbished for this program. The Army previously advised Guns.com an estimated 31,000 rifles on loan to groups including such organizations as the American Legion, Veterans of Foreign Wars, and Disabled American Veterans.

“We’ve got one chance to get it right at your grandfather’s funeral,” said Townsend, showing off a newly updated Honor Guard rifle. Prior to the CMP taking over support for the groups, there were a myriad of blank-firing adapters and rifle models used, and they didn’t always work. He says they have standardized the process with a single BFA and standardized rifle (the M1) and haven’t had any complaints about functionality.

Besides the armorers working through the mystery, the CMP also has five dedicated armorers who live and breathe U.S. military rifles and perform amazing feats in the organization’s custom shop. Here is where an average of 20-25 guns a week are reworked from customers to a requested standard or grade. Springfield 1903 snipers with correct optics, M1917s that look like they came from a museum, National Match work, AR’s, vinatge .22 target rifles, you name it. 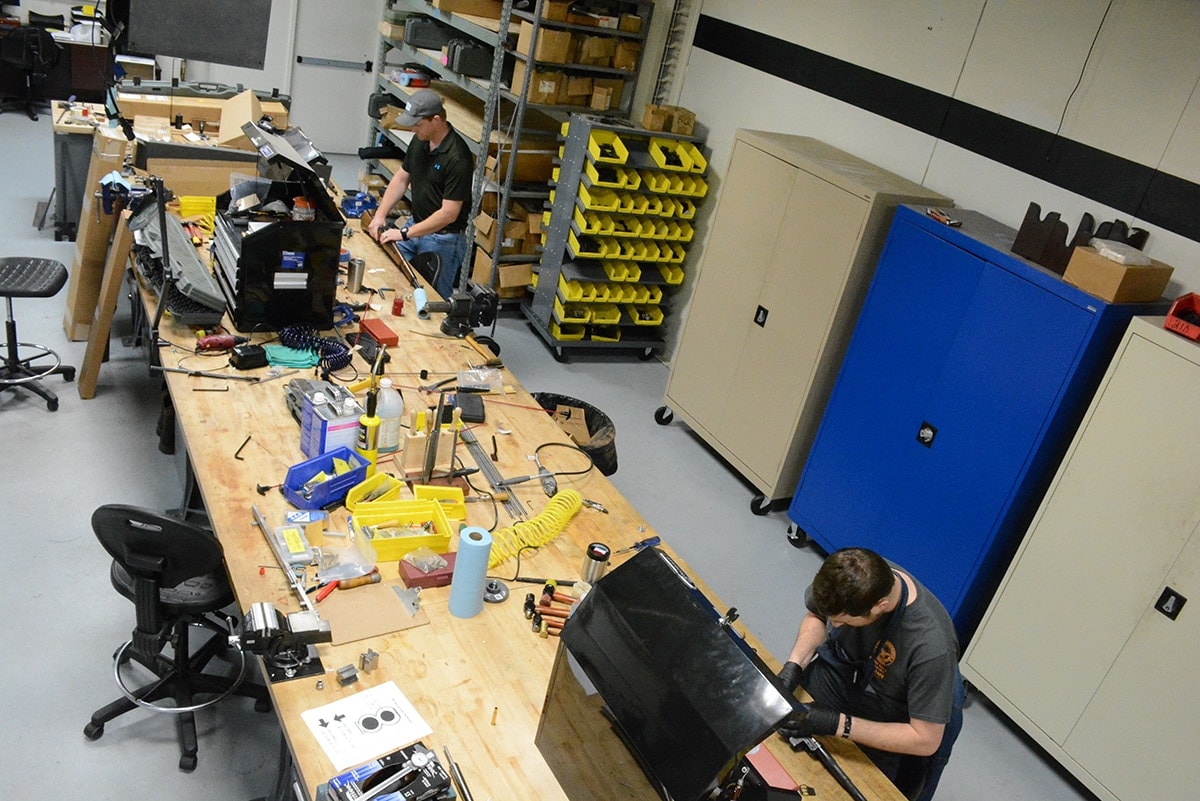 Where the magic happens (Photo: CMP)

Don’t get in a hurry though, because you can have it right or you can have it now, but you can’t have it right now. The typical custom shop gun takes 2-3 weeks and they have a six-month backlog. But hey, if you want an M1 done your way, these are the guys to do it. In fact, they hold eight classes a year where they open the shop up to the public to come and build their own M1 from the ground up under the watchful eyes of the staff.

The CMP is something of the liquidation master for the military’s surplus guns and gear that doesn’t raise an NFA flag and there is a little bit of everything floating around. In one room, Townsend walks us through the group’s online auction operation and points out a beast of a Marine Corps issue 10x Unertl sniper optic. A rack holds a high chrome ceremonial M1, a couple of Krag rifles that date from the Spanish-American War, an exceptionally rare “Postage Stamp” M1 made by International Harvester, and others. On a table is a complete bolt-action sniper rifle still with the sand of Afghanistan on it. A box holds the odd Mann Accuracy Device — a converted M1903 with a sawn-off stock used to test ammo loadings. Recently a crate of Japanese bolt-action rifles appeared.

This Model 1898 Krag modified Springfield was up for grabs on the CMP’s auction site when we visited (Photo: CMP)

As was this Air Force Premium Grade NM M-1 Garand. These were built into match rifles by armorers at the USAF Competitive Weapons Shop at Lackland AFB

The curious, exceptional and odd are gathered and sent here to be put online one at a time in the hopes of marrying the item up with just the right collector who is looking for it. As with everything else, the money goes back into the organization to help promote the shooting sports and marksmanship. This year alone, CMP awarded 158 scholarships to students involved in JROTC, 4-H and other junior shooting club marksmanship activities.

While in the past the group held on to legacy rifles like M1 Carbines that pop up from time to time and sold them in small releases, Townsend said interest is so great and the numbers of guns so small that “We can’t turn it off fast enough.” Last year the group had such a huge outpouring after advertising a lot of Carbines that they received 23 tubs of mail the first day, effectively selling out immediately.

In addition to an e-store that hawks new and surplus ammo, bayonets and targets, brick and mortar storefronts at both Anniston and Camp Perry give eligible buyers the chance to peruse a constantly shifting inventory. On our visit, just before the store’s opening, we saw everything from a big box of cotton OD slings ($6) to bayonets, to a number of collector grade M1s and drill rifles. 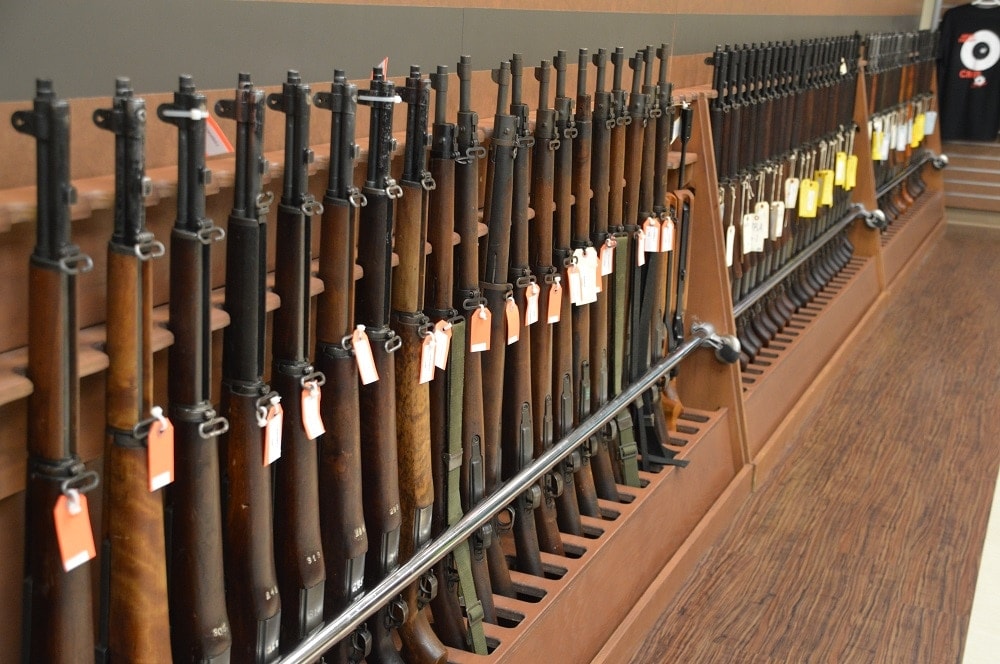 They would not let us load them all up. 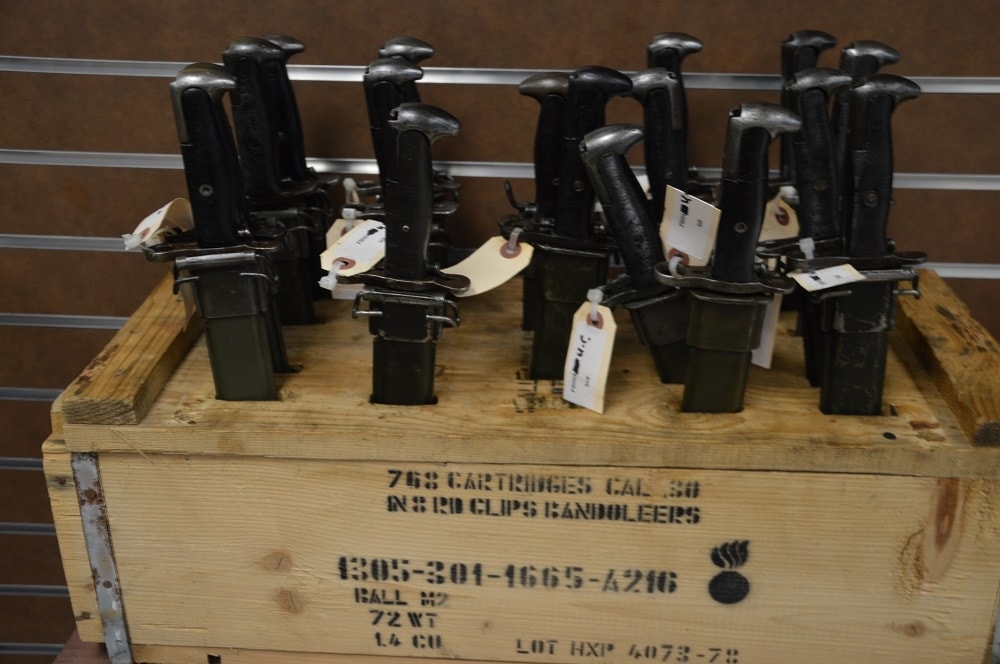 A number of both M5A1 and M7 bayonets were on hand 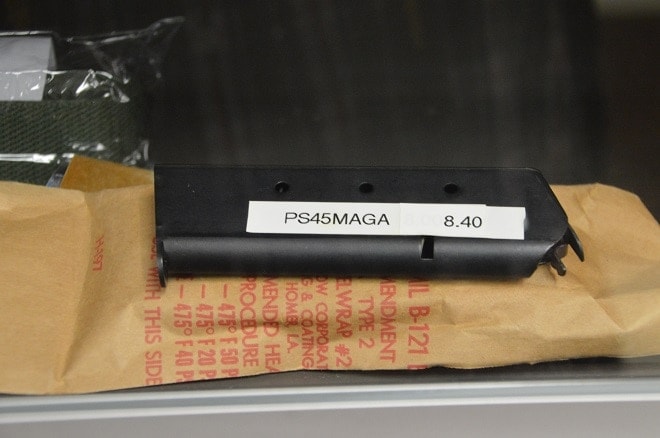 As were M1911 mags still in the wrap. Hopefully, the organization will be getting many more of these 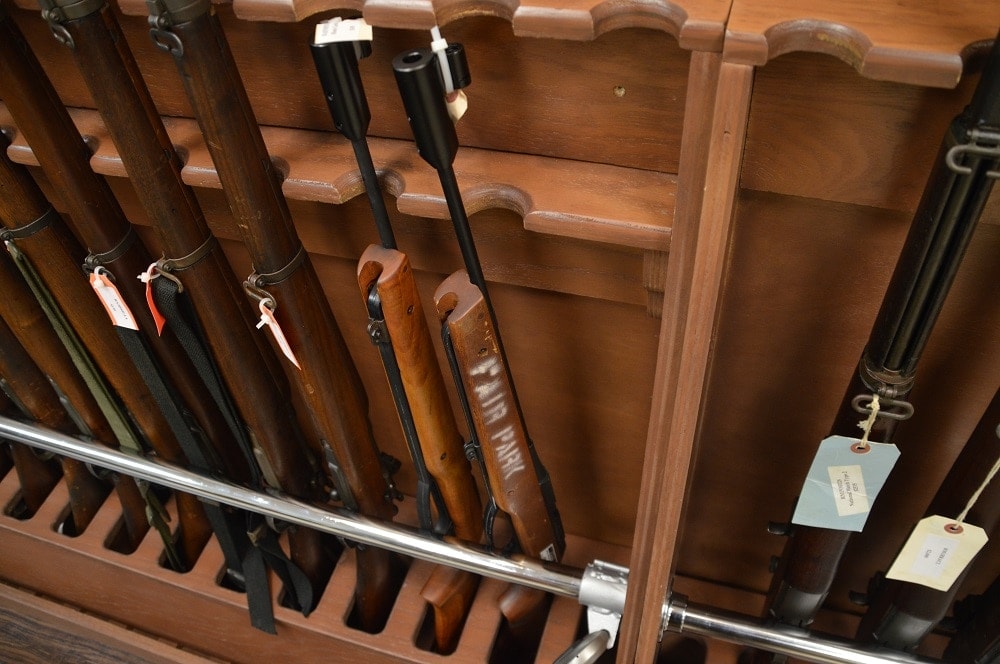 The crowd was brisk but exceedingly polite when the door was opened to the public, with everyone eager to pick up a possible new addition to their collection.