CMP: Rare M1 Garands now filtering out to the public 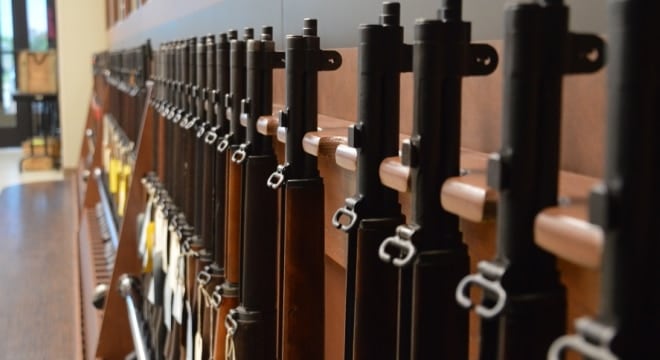 A line of M1 Garands up for grabs at the CMP’s South Store in Anniston, Alabama. (Photo: Chris Eger/Guns.com)

With a large cache of vintage M1 Garands recently repatriated back home from overseas allies, the Civilian Marksmanship Program has announced that some seldom-seen variants are now available.

In a statement issued Thursday, the federally chartered non-profit organized to support marksmanship activities nationwide said they had numbers of M1s made by International Harvester Company in stock. Long unavailable except for occasional small batches turned over by the Army, IHC Garands in both Field and Service grades are listed for sale through mail order on the CMP’s website. The rifles are priced at $980 and $1,080, respectively.

Of the more than 5 million Garands produced for the military, just 337,623 were made by IHC and most of those were sent overseas to U.S. allies in the 1950s and 60s, making the number in circulation in the U.S. limited. A myriad of IHC guns with minor differences such as “Postage Stamp,” “Gap Letter,” and “Arrowhead” variants further drives up collectibility on these late-model rifles.

The Garand Collectors Association, whose volunteers helped catalog the shipment, said as many a quarter of the guns inspected were IHCs. While CMP officials explained that the guns returning from Turkey and a larger batch incoming from the Philippines are not outwardly marked as a rule, some collectors who have recently bought M1s through the organization have discovered paper dope cards written in Turkish affixed to rifles.

For those who want a more common (and less expensive) Springfield or H&R-made Garand, CMP has them in Field grades for $650 with free shipping with Service grades being $750. Sales go to support marksmanship endeavors by the group.

To order a rifle from CMP, you have to be a U.S. citizen, member of one of over 2,000 affiliated organizations or clubs, and show proof of marksmanship — the latter of which can be proved with a concealed carry license, hunter safety card or past law enforcement or military service.