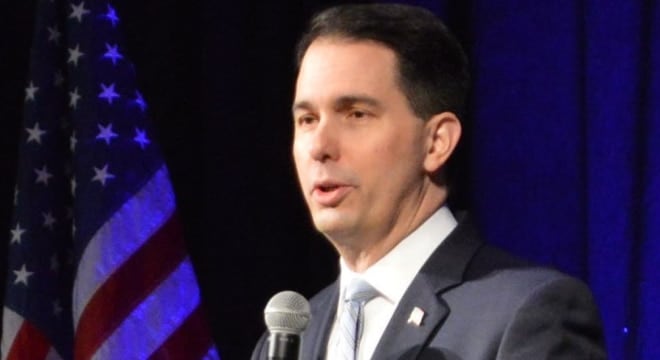 Walker signed the measure bumping up the penalty for an illegal straw purchase of a gun under Wisconsin law from nine months to six years in prison. (Photo: Walker’s office)

Wisconsin Gov. Scott Walker on Wednesday approved a measure touted as making it easier to prosecute illegal straw purchasing of firearms in the state.

The bill, SB 408, was among 41 signed by the Republican without comment this week. The new law makes it a Class H felony in the state to purchase a gun with the intent to give it to someone prohibited from possessing a firearm or to act as a “human holster” by holding a weapon for a criminal. The backers of the proposal, which passed the legislature on a voice vote, say the move was requested by the Milwaukee Police Department.

“Criminals were very aware of these loopholes,” said state Sen. Alberta Darling, R-River Hills. “Thanks to Governor Walker, prosecutors should be able to make gun charges stick and get dangerous criminals off the streets.”

The law raises the maximum penalty for the illegal “straw purchasing” of guns under state law from a $10,000 fine and nine months in jail to six years in prison. Similarly, those acting as a human holster for a criminal would be subject to a felony. In addition, the measure carries a mandatory minimum of four years in prison for repeat offenders involved in firearm-related crime if they are charged with three subsequent misdemeanors or one felony within a five-year period.

During the legislative process for SB 408, law enforcement representatives from Wisconsin’s largest city testified to lawmakers that officers in Milwaukee recovered more guns per capita than in Chicago. In all, the agency logged 2,420 firearms in 2016, a rate of 407 per 100,000 people. Chicago, a much larger city but with similarly high murder rate, recovered 247 guns per 100,000 people. Authorities argued that arming prosecutors with the ability to go after those obtaining or holding firearms for those who are legally barred from having them will help cut down on gun crime in the city.

While straw buying is primarily prosecuted on the federal level, Wisconsin is not the first state to recently adopt their own statutes on the crime. In 2012, Pennsylvania established the so-called “Brad Fox Law” named after a police officer shot in the head by a felon who had illegally purchased a gun through a third party. Since then, a number of straw buyers have faced a mandatory five-year minimum sentence under its guidelines.